Add an Event
Newswire
Calendar
Features
Home
Donate
From the Open-Publishing Calendar
From the Open-Publishing Newswire
Indybay Feature
Publish to Newswire
Add an Event
Related Categories: East Bay | U.S. | Anti-War | Government & Elections | Labor & Workers
Town hall calls for impeachment to save the Constitution
by Sharat G. Lin
Tuesday Apr 29th, 2008 9:48 AM
A regional town hall on the subject "Are Peace and Impeachment Possible?" was held in Oakland to reaffirm the need and political viability of impeaching Vice President Dick Cheney and President George W. Bush. It enjoined the audience to support new candidates running against Democratic Party leaders who have declined to challenge the Bush administration for its violations of the Constitution and international law.

original image (1500x500)
In a rare west coast appearance, David Swanson, founder of AfterDowningStreet.org, reminded a San Francisco Bay Area audience that it is never too late for impeachment. In response to critics who say that with only 9 months left in office, it is too late to impeach Vice President Dick Cheney and President George W. Bush, Swanson argued that it is essential to establish the precedent that future presidents and vice presidents will be required to obey the Constitution.

At a town hall held on Thursday, April 24, 2008 at the Grand Lake Theatre in Oakland, Swanson said that President Bush's unprecedented use of "signing statements are rewriting laws passed by Congress" because Bush uses them to ignore whatever sections of the law that he doesn’t like.

Swanson urged members of the audience to go to local congresspersons who have not yet endorsed impeachment, "bring along a copy of the Constitution, and say that it demands impeachment, impeachment, and only impeachment!" As he spoke, the original U.S. Constitution was projected on the towering screen behind him.

Cindy Sheehan called Congress complicit in the signing statements because it does not force the President to follow the laws enacted by Congress. She said impeachment must go forward because all future presidents must know that Congress and the people are real checks and balances. Sheehan, who has become the most prominent face of the U.S. antiwar movement after she established Camp Casey (in memory of her son killed in Iraq) in front of George Bush's Texas ranch, is running for Congress against Nancy Pelosi.

Daniel Ellsberg, a former military analyst who released the Pentagon Papers in 1971, echoed this sentiment by saying that "failure to impeach would seriously jeopardize the Constitution." He argued that Democrats have been reluctant to impeach because most of them are "complicit in attacks on the Constitution." Impeachment proceedings would open investigations that could reveal evidence of wrongdoing by members of both parties.

Phil Burk, an expert on the impeachment process, countered the Democratic Party claim that impeachment would unduly sidetrack the Democrats' "legislative agenda," by recalling that President Andrew Johnson was impeached within 7 days after impeachment hearings were initiated. With the overwhelming weight of evidence of wrongdoing by Vice President Cheney and President Bush, the verdict would be inescapable and could be quickly concluded.

Burk explained that an "impeachment flood," consisting of a succession of many small resolutions for impeachment, would be a viable tactic for raising the impeachment issue in Congress. He explained that the writ of mandamus is a little-known legal provision for suing a member of Congress to do his or her job in Federal court.

The town hall, entitled "Are Peace and Impeachment Possible?" was convened by Cynthia Papermaster. It was attended by 300-400 people from all over Northern California.

Papermaster had earlier announced her candidacy to run against Congressman Pete Stark, who had been reluctant to back impeachment. Then on March 5, 2008 Stark signed onto H.Res. 333 to impeach Dick Cheney for high crimes and misdemeanors after a poll of his constituents returned two-thirds in favor of impeachment. Papermaster immediately dropped her candidacy against Stark and announced her candidacy to run against Congresswoman Zoe Lofgren in the June primary. Lofgren has also been hesitant on impeachment, but has come under increasing pressure from her constituents to endorse impeachment. The Silicon Valley Impeachment Coalition has been holding weekly vigils in front of her office, pressing her for impeachment for many months.

Clarence Thomas, of the International Longshore and Warehouse Union (ILWU) Local 10, called May Day the original labor day. He said that the ILWU was happy to carry on the tradition of Harry Bridges, who played a key role in founding the union, by shutting down all 29 ports on the West Coast in protest against the war on Iraq. Thomas stated that resolutions against the war are positive, but they do not stop wars. "But when you stop the ports, the White House listens and the whole world listens." He warned that there might be sanctions against the strike from employers, but reassured the audience that the ILWU was prepared to take that risk.

Berkeley City Councilman Max Anderson talked about the struggle against the deceptions of military recruiters. He observed that because the U.S. allowed much of Iraq's 5000-year historical heritage to be obliterated after the invasion while protecting the oil fields, this revealed the true interests of the U.S. government in Iraq. He said that the leaders of the Bush administration should be tried in the Hague for war crimes and violations of international law.

Shirley Golub pulled out a rubber chicken to illustrate the "spinelessness" of Congress in failing to stand up to President Bush's wars, torture, signing statements, and other violations of the Constitution. Golub is also a candidate for Congresswoman Nancy Pelosi's seat in the June primary.

Allen Michaan, owner of the Grand Lake Theatre, announced that impeachment lettering would be going up on the theater's marquee. He also announced the launch of a new website, http://www.peoplesamendment.org, to propose a series of amendments to the U.S. Constitution to more explicitly prevent deviations from the original intent of its authors.

A dozen members of Code Pink, led by Medea Benjamin, trotted onto the stage with a huge banner declaring "impeach" in luminous pink letters.

Speakers agreed that it is never too late to impeach in order to find out the truth and to prevent violations of the Constitution from ever happening again. 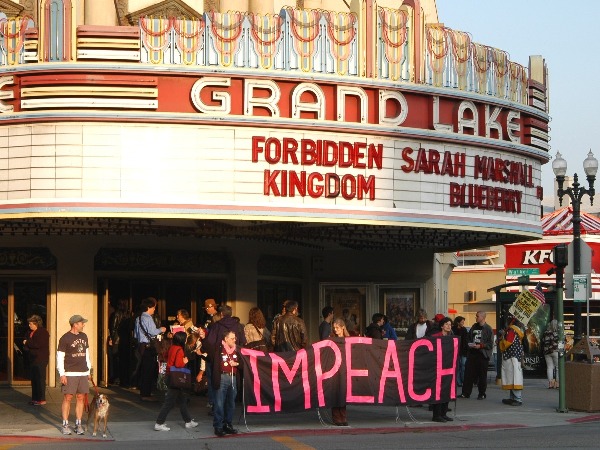 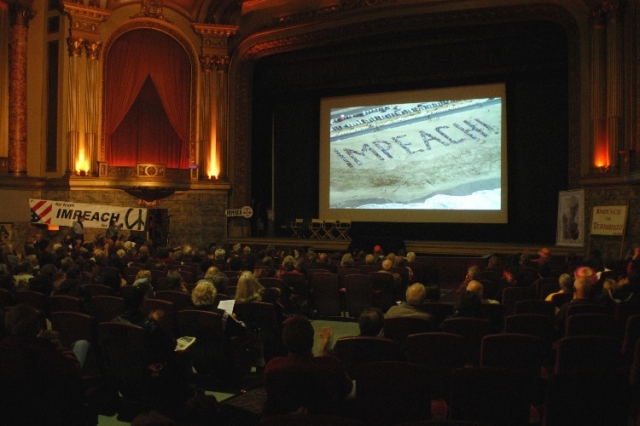 original image (750x500)
A film clip was shown of "Impeach on the Beach" where over a thousand people spelled "Impeach" with their bodies on San Francisco's Ocean Beach.
§Cynthia Papermaster
by Sharat G. Lin Tuesday Apr 29th, 2008 9:48 AM 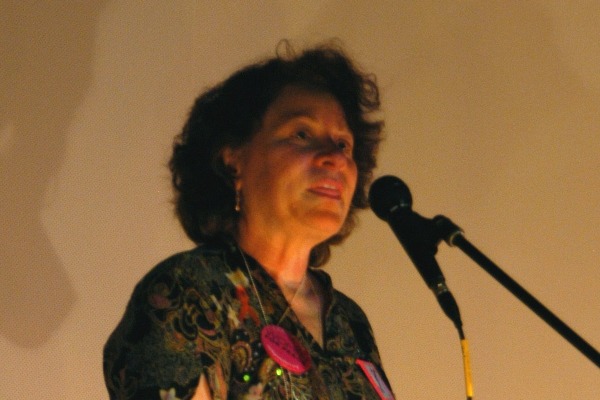 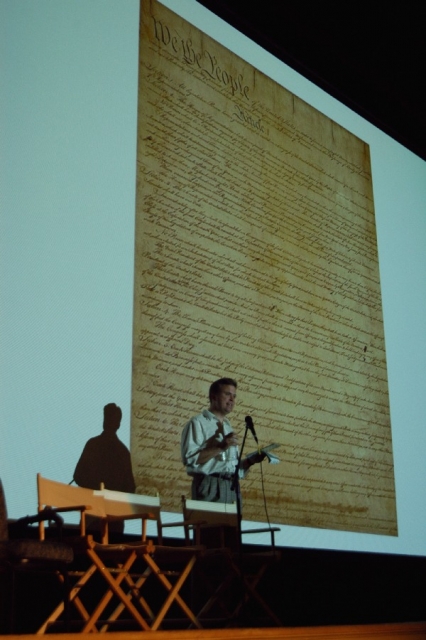 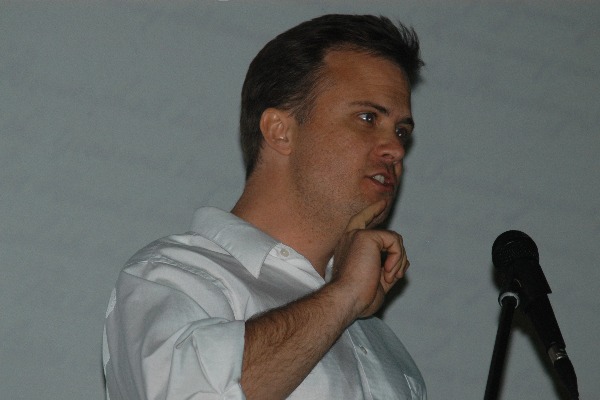 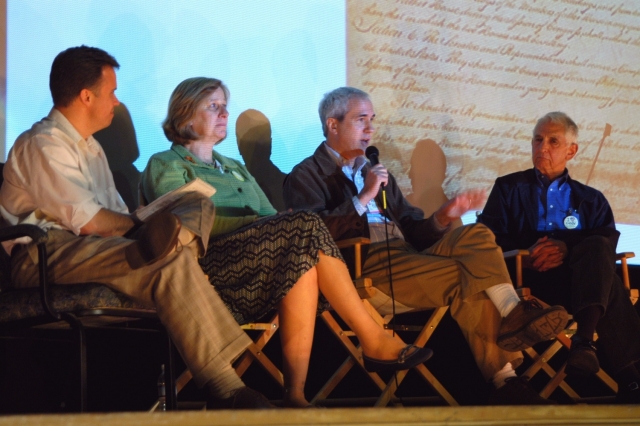 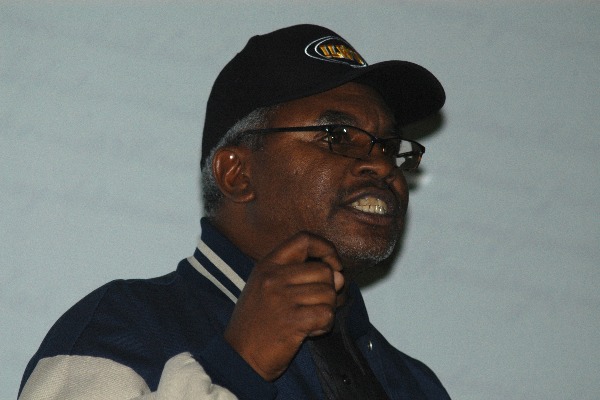 Clarence Thomas of the International Longshore and Warehouse Union (ILWU) Local 10 explained why workers are shutting down all West Coast ports on May Day (May 1) in protest against the war in Iraq.
§The Political Power of Hip Hop
by Sharat G. Lin Tuesday Apr 29th, 2008 9:48 AM 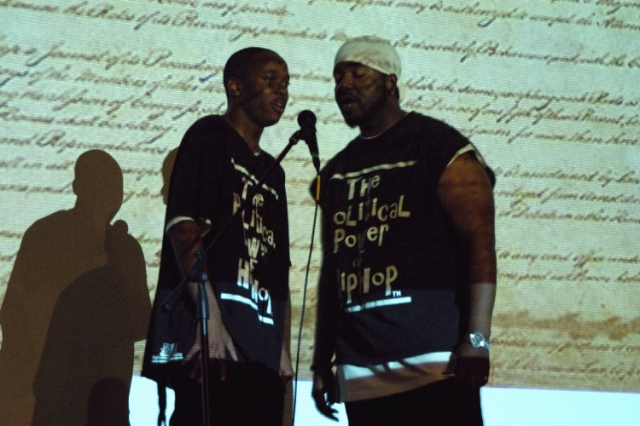 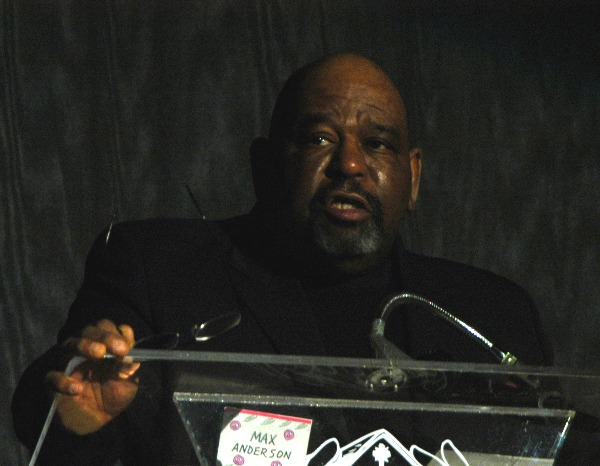 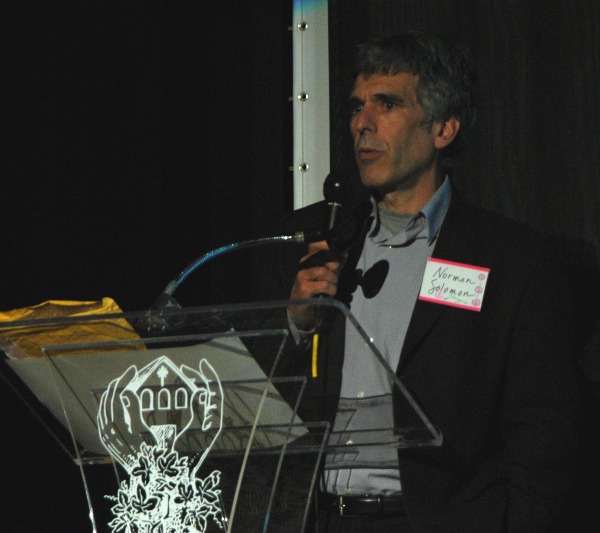 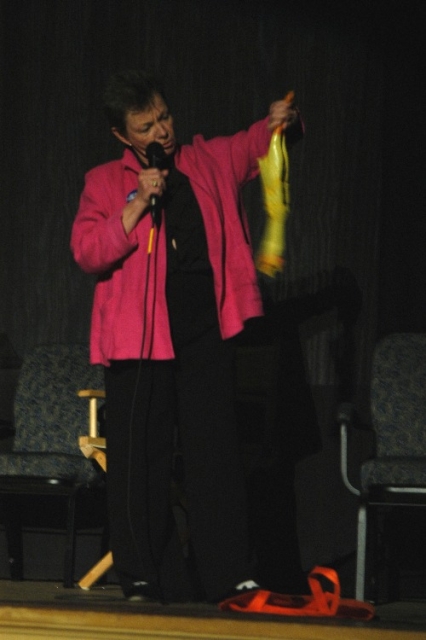 original image (500x750)
Shirley Golub uses a rubber chicken to illustrate the "spinelessness" of Congress in failing to stand up to President Bush.
§Allen Michaan
by Sharat G. Lin Tuesday Apr 29th, 2008 9:48 AM 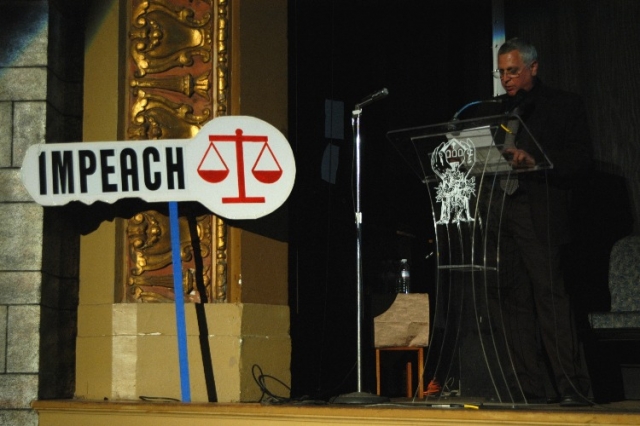 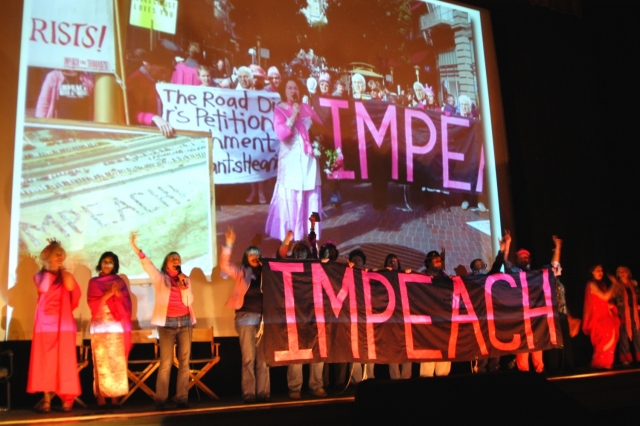 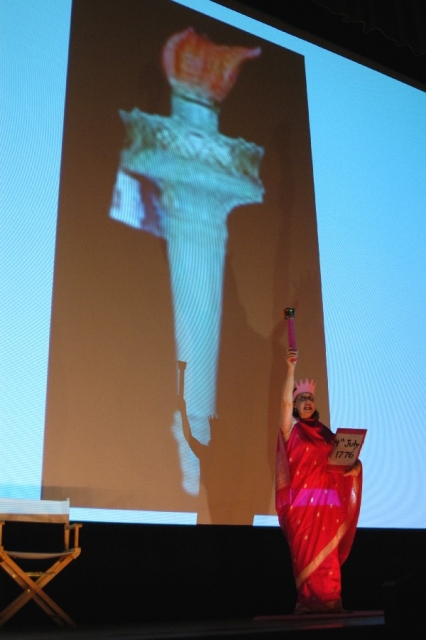 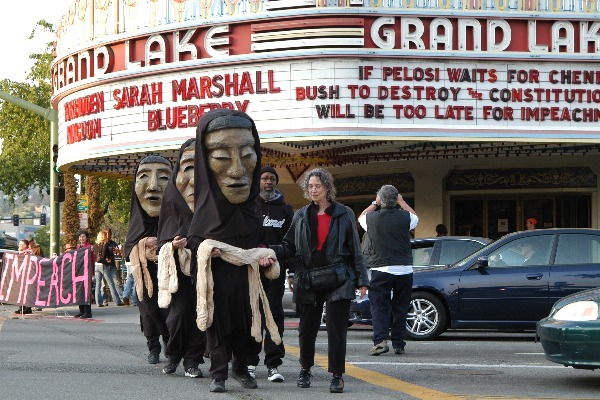 Outside the Grand Lake Theatre, Women in Black draw attention to death and destruction caused by the Bush administration.
Add Your Comments
LATEST COMMENTS ABOUT THIS ARTICLE
Listed below are the latest comments about this post.
These comments are submitted anonymously by website visitors.