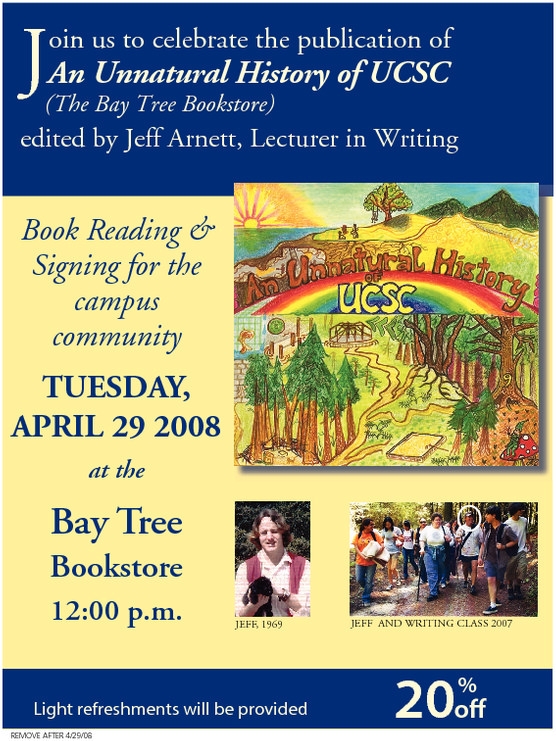 Import event into your personal calendar
Date:
Tuesday, April 29, 2008
Time:
12:00 PM - 1:00 PM
Event Type:
Speaker
Organizer/Author:
Elves
Location Details:
Bay Tree Bookstore, UCSC
All are welcome to a
BOOK READING AND SIGNING
to kick off the publication of "An Unnatural History of UCSC":
A new book about fables, relics and hidden forts of the UCSC Campus, edited by Writing Lecturer Jeff Arnett and mostly written by students of his classes.

A special guest from the days of Elfland and the protests to save it will also be speaking.

Light refreshments will be provided.

Noon, at the Bay Tree Bookstore.

Since it first opened, UCSC's 2000 acres of forest have lured students seeking adventure, a respite from work, and spiritual guidance into the wandering wood. An evocative landscape of the mind that resembles sites in Spenser's Faerie Queene and tolkien's modern allegories, the campus contains places symbolically named "Elfland." "Faerie Ring Redwood Grove," "End of the World Pool," "Wayfarer's Den," "Den of Justice," "Dell of the Winds," "Bridge to Heaven," and "Peace Fort." Stories abound throughout UCSC's forty year history of inspiration, illumination and enlightenment available in the backwood trails on campus.

An Unnatural History of UCSC, a new student-written publication, gathers some of this evocative, sometimes poignant, history through alumni reminiscences, newspaper accounts, and photographic archives. One chapter, "Elfland: A Trip Back in Time," for example, describes a poetics of space (Gaston Bachelard's eponymous term), revealing a campus mythic legacy previously available to most of us almost exclusively through oral tradition.

If you're interested in finding out what a deer-cow or a morad is, or you're curious about John o' the Woods or King of the Elves, two inhabitants at one time or another of our campus, check out this book. You may discover a hermetic aspect of college familiar to your parents' generation.

The beauty of the world is shaped by the beings that exist within it, producing a unique environment that can inspire awe in those who see it. The landscapes we see today are “painted and decorated” by the trees and flowering plants within them. We hear the buzzing of insects and the calls of birds. We see a deer leaping through the forest or a monarch butterfly hovering overhead. All of these come together to form the natural landscape of a place like UC Santa Cruz where a wide variety of life colors the region.

In geologic time, the campus is only recently risen from the sea. Ocean waves slowly shaped cliffs in the rock of the campus. Thousands of years of exposure have rounded these old cliffs, while streams have cut through them. If you use your imagination, you can look at the lower campus and admire the work of these ancient waves. Cowell and Stevenson Colleges stand above an ancient sea cliff; other cliffs cross the Great Meadow.

However, to most observers, trees are by far the most important natural element on the campus of UCSC. They provide the unique experience of going to school surrounded by the forest and also allow for the creation of most of the unique sites discussed in this book. The natural history of UC Santa Cruz is a very rich and very long one, so to provide a picture of it, I have described a few of these notable species in this chapter.

Coast Redwood (Sequoia sempervirens). It is the most abundant tree on campus. With a range that spans a small strip of coastal land from Oregon to the Santa Lucia Mountains in Monterey County, California, they exist within close proximity to the ocean, usually in the hills and mountains, though sometimes at sea level, where they can receive adequate precipitation. They are the tallest tree on earth, reaching a height of over 350 feet and a base diameter of 23 feet. This can make for a very tall tree whose branches appear the densest from about midway up to the top where they receive more light to photosynthesize. Usually, the older the tree, the taller it is, and redwoods can be over 1500 years old; unfortunately, most of the campus was logged during the days of the Cowell Ranch and most redwoods are no more than 100-years old on campus and are about 50-200 feet in height. Upper Campus has the tallest and thickest forest of redwoods.

The most unique characteristic of the redwood is its ability to grow in circular groups, called fairy or cathedral rings. This occurs because of their ability of sprouts to grow from roots and burls beneath the soil. When the tree is alive and healthy, new trees tend not to sprout up but as it dies new trees can sprout up and grow just as large. As Tonya Haff of UCSC’s Environmental Studies Department explains, “When a tree is cut, it is not killed. Its roots remain alive, and quickly send up sprouts at the base of where the original trunk grew. These saplings are genetic clones of the “parent” tree, and of each other; they share the same root structure and are actually the same individual plant.” This phenomenon is what allowed the creation of many sites around campus, in particular Elfland (see “Elfland”). If you find yourself searching for redwoods around campus, just look around and in most habitats you will be likely find one. They can be identified by their tall, straight trunks with long, thin branches, short, dark green needles (instead of broad leaves), and thick, soft brownish-reddish bark that appears ragged and torn.

Douglas-Fir (Pseudotsuga menziesii). The second tallest species of tree in the world to the Coast Redwood, it can attain heights of up to 330 feet and 6 feet in diameter. This tree is abundant in most areas of the campus, often intermingled with the redwoods. It produces cones that average about 3” in length and are soft and pliable to the touch. Its branches can grow thick and dense, sprawling out more than a redwood and shading the forest below. If you want to see an impressive example of Douglas-fir, make your way up to Tree 9, probably the most-climbed tree on campus.

Coast Live Oak (Quercus agrifolia). One of the most characteristic trees of the rolling grass hills of California, the Coast Live Oak grows to a maximum height of about 65 feet. Unlike the previous two trees, this species tends to grow thicker and broader at the trunk, with a contoured, gnarled trunk. This feature makes the tree excellent for climbing. The tree thrives along coastal environments throughout California. It is abundant in the mixed evergreen forest on campus where it grows with Douglas fir and other broadleaf trees, and also standing alone atop hills, like the “Mushroom Tree 2.” If you want to find one, look for a stout-looking tree with a bending, twisted trunk leading up to branches spreading out in all directions.

Manzanita (Arctostaphylos spp.). Manzanitas can appear as large shrubs or sometimes trees and can be found over much of the campus. On campus they can be identified as shrubs with smooth, orange-red bark with twisting branches. At certain times of the year the bark peels off and the under-layer feels cool to the touch, great if you are hiking on a hot day.

Redwood Clover or Redwood Sorrel (Oxalis oreganus). This small plant’s leaves resemble clover leaves, from which it gets its common name. They can be found throughout the cooler, shaded regions of campus, and in particular beneath redwood trees (hence the name). If you find yourself craving a taste of the forest, pluck a couple leaves and have a snack; they taste somewhat sour, but be sure not to pluck any poison oak, which also has leaflets that grow in threes.

Western Poison-Oak (Toxicodendron diversilobum). “Leaves of three, let it be.” This well-known rhyme is used to help avoid contact with poison oak. The plant, not actually an oak at all, inhabits a wide range and almost any climate conditions along the central and northern California coast. In open sunlight it will actually grow as a bush, but in shaded regions it usually remains smaller and grows as vines around trees and other plants. The leaves contain the majority of the toxin, which causes blisters and rashes—often very itchy—on the skin, and can be identified by lobed or scalloped leaflets, growing in threes, and sometimes glossy. The glossy effect is a result of the oil on the surface, which sometimes causes painful irritations. In the spring, the leaves are bright green and slowly fade to yellow in the summer and into bright red or pink in the fall. The plant is deciduous so it loses all its leaves in winter but the stems can still affect the skin. At times, the stems can be identified by black marks where the dark sap has oozed out. Poison oak is plentiful at UC Santa Cruz, especially the upper campus, so if you go off trail to some of the more remote sites, be sure to wear pants and shoes. If you do happen to come into contact with poison-oak, wash with cold water as soon as possible as the oil can spread and continue to affect the skin; hot water only makes it spread more, opening up pores. After washing, use calamine lotion for the itching that will ensue and try not to scratch the affected skin.

Banana Slug No natural history of the UCSC campus would be worth its salt without mention of the banana slug, our beloved school mascot. A bright yellow, slimy, shell-less mollusk found in the campus's redwood forest, it was the unofficial mascot for UC Santa Cruz's athletic teams since the university's early years. The students' adoption of such a humble creature for a team mascot was their reaction to the fierce athletic competition fostered at most American universities.

Native to the forest floors along the Northern Pacific Coast of North America, Banana slugs process leaves, berries, animal droppings, and dead plant material, and then recycle them into soil. They seem to have a fondness for mushrooms, and they spread seeds and spores when they eat. Their slime contains pheromones to attract other slugs for mating. Slugs are hermaphrodites and reproduce by exchanging sperm with their mate; they mate and lay eggs throughout the year. Banana slugs move slowly since, like all slugs, they have only one muscular foot.

Banana slugs await you as you explore the campus of UC Santa Cruz (especially in the rainy season), but there are many more species of plants and animals that live in this wonderful environment, so keep an eye out. You may see deer, chipmunks, Monarch butterflies, red tail hawks or golden eagles, and if you are really lucky, a bobcat, coyote or rare mountain lion (look for posted signs around campus). Happy travels!

Thanks to Tonya Haff for editing this chapter for accuracy. She is currently completing the editing of a 2nd edition of The Natural History of the UC Santa Cruz Campus (see “Appendix”).

Environmental Field Program, University of California, Santa Cruz, 1982.
END_OF_DOCUMENT_TOKEN_TO_BE_REPLACED
Add a Comment
Support Independent Media
We are 100% volunteer and depend on your participation to sustain our efforts!