Newswire
Calendar
Features
Home
Donate
From the Open-Publishing Calendar
From the Open-Publishing Newswire
Indybay Feature
Publish to Newswire
Add an Event
Related Categories: Central Valley | Arts + Action | Education & Student Activism | Racial Justice
Hip Hop Concert to Save Native American University (5/2)
by AM Harara
Thursday Apr 24th, 2008 11:43 PM
UC Davis's Students Organizing for Change and the Muslim Student Association are teaming up with Sacramento State UNiversity to host a benefit hip hop concert [ featuring Kiwi and the Blue Scholars] to stop the injustice at DQ University, the only Native American college in the state thats being shut down due to lack of funds!!!!!!! 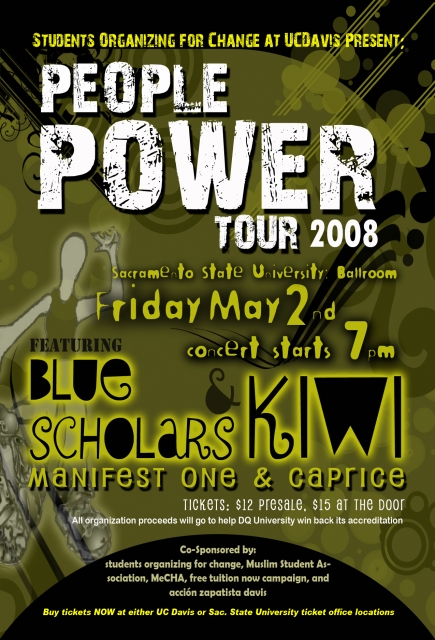 Two of the West Coast's premier Filipino American Emcees, Geologic aka Prometheus Brown of Seattle's Blue Scholars and San Francisco's Kiwi, formerly of Native Guns, are teaming up again to rally youth and students to raise awareness with a nationwide People Power Tour. Geologic elaborated, "We are volunteering to do this concert because we have a responsibility, beyond music, to raise awareness and hopefully incite action that addresses the human rights crisis and government corruption in our homeland."

Over the next three weeks, this dynamic duo will criss- cross the West Coast and Midwest, collaborating with local groups and emcees for 13 shows in 11 cities. Proceeds from the tour will be donated to Bayan-USA, an alliance of progressive Filipino American organizations advocating for social justice and democracy in the Philippines.

At the Sacramento stop, Pakistani Muslim hip-hop artist Manifest One, from Los Angeles, and Caprice, a socially conscious Syrian emcee from New York, will also be performing. The local co-sponsoring student groups are concurrently raising awareness to help Deganawidah-Quetzalcoatl University, the last Native American college in California, win back its accreditation.

UC Davis's Students Organizing for Change along with the Muslim Student Association are collaborating with MeCHA and Acción Zapatista Davis to bring all these socially conscious artists to Sacramento State University.

Both Kiwi and Geo are active Filipino community organizers, drawing connections between the struggles of Filipinos in the US and their compatriots back home. They share the view that art is not only a reflection of the world, but a tool which can shape a more just future society. Kiwi shares, "For me personally, I found my identity and was eventually politicized through hip hop, and I feel like I owe it to this culture to make music and do shows that will hopefully have the same impact on this generation of youth and hip hop fans."

From the rapidly gentrifying street-corner to the Ivory Tower of academia, Kiwi and Geo along with Manifest and Caprice bring forth a message of resistance and self-determination in the tradition of pro-people hip-hop music. This message is especially critical in the Sacramento Area due to the recent events at DQ.

In California, DQ University was born of struggle in the 70's when people occupied an abandoned Army facility and transformed it for the purpose of providing traditional and formal education for Indigenous people. Eighteen student activists were arrested during a police raid on March 31, 2008 as the DQ Student Body continued conducting classes, despite the loss of the school's accreditation due to previous corruption in their school's administration.

The point emphasized by the student groups at the Sacramento stop of the tour is that even though ethnicities may differ, the struggles for social justice remain as one. Therefore only through supporting one another and creating solidarity between communities, can our collective goal be achieved.

Kiwi states, "The name of the tour was inspired by the "People Power" movement that drove out two corrupt Presidential regimes in the Philippines. Because part of the focus of this tour is the corruption of the current GMA regime, we felt like the name made a lot of sense." A rapidly growing movement comprising of all sectors of the Filipino community are mobilizing to oust the corrupt administration. In the two previous non-violent People Power movements, the Filipino people ousted Dictator Ferdinand Marcos (1986) and the corruption-ridden Joseph Estrada (2001).

Proceeds from the tour will be donated to support Bayan-USA's local and international campaigns advocating for social justice and democracy in the Philippines. Local student chapters will also be donating their proceeds to the Student Body of DQ University. People Power Tour, Part 1 includes shows on International Workers Day - May 1st, and through Asian Pacific Islander Heritage Month.

This extraordinary hip-hop concert will be taking place Friday May 2, 2008, at 7 pm at The Sacramento State University Ballroom. To help raise awareness about this cause or for more ticket sale information please call email concerts.soc [at] gmail.com.
http://img180.imageshack.us/img180/1431/pe...
Add Your Comments
Support Independent Media