The Leftist Gorillas of Comedy 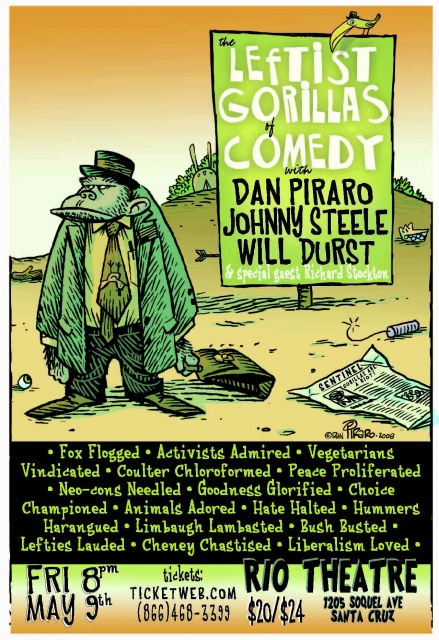 Discount tickets for activists, volunteers and non-profits at: http://johnnysteele.com/showtickets.html

• Will Durst is a 5-time Emmy Award nominee and a 7-time nominee for The American Comedy Awards Comedian of the Year. His Off Broadway solo show was repeatedly extended and came “Highly Recommended” by the New York Times. His new book The All American Sport of Bi-partisan Bashing goes on sale May 1st.

• Johnny Steele has hosted award winning radio and TV shows in San Francisco. A former winner of the S.F. Comedy Competition, Steele’s performances have been described as ‘A tidal wave of social and political commentary’.

END_OF_DOCUMENT_TOKEN_TO_BE_REPLACED
Added to the calendar on Thu, Apr 24, 2008 11:14AM
Add Your Comments
Support Independent Media
We are 100% volunteer and depend on your participation to sustain our efforts!