by ~Bradley (bradley [at] riseup.net)
The tradition of students un-welcoming the military to UC Santa Cruz and disrupting their attempts to recruit is alive and well, as demonstrated during the "Career" Fair on April 22nd. Students Against War rallied in the Baytree Plaza and marched to the "Career" Fair held in the multipurpose rooms for Colleges 9/10. Campus police, administrators, faculty, other staff and students collected backpacks and identification cards from the students who entered the "Career" Fair. Colorful helium balloons arched over steel barricades at the entrance to the "Career" Fair featured signs that boldly proclaimed "Part-time Jobs!!!" Indeed, the future is very bleak for the generations growing up during Reagan, Bush Sr., Clinton, Bush Jr. and whoever comes next. 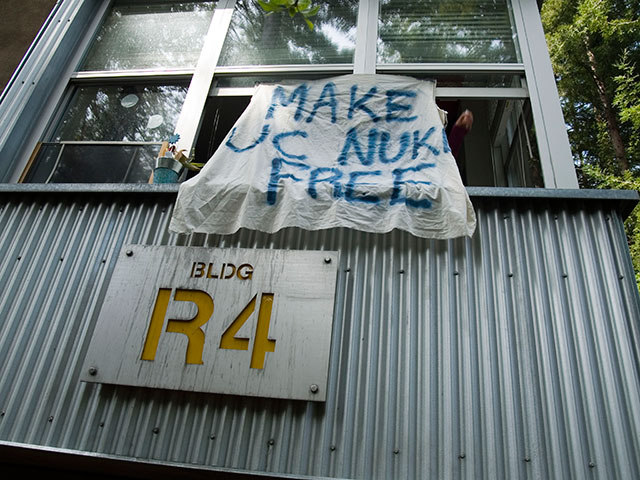 Outside the "Career" Fair, students demonstrated against military recruitment with banners, flyers, zines, photos from Iraq, theatre of tortured detainees, juggling and more. Meanwhile on the inside, student protestors were dancing, reciting poetry, questioning military and FBI recruiters, chanting and otherwise disrupting efforts by the FBI, Army, Marines and Police (Sacramento, San Francisco and UCSC) to spread their information. After three hours of trying to recruit in the midst of a protest, both Army recruiters packed up their glossy propaganda at 2:00pm.

"As students of UC Santa Cruz, we oppose the presence of military recruiters on campus. As an employer that uses predatory and discriminatory practices in recruitment, recruiters directly represent the homophobic, sexist and racist ideologies that have no place in this University. Furthermore, the military’s inhumane treatment of soldiers during and after tours of duty – through, for example, the neglect of the psychological and medical consequences of war – demonstrates that they view troops not as employees, but as property to be used and then discarded. Recruiters offer false promises of education and opportunity in order to manipulate people in to signing away the fundamental rights to which we are all entitled. We will not let our University be a vehicle for a system based on hateful ideologies and manipulation. We will not let our University be a vehicle to perpetuate the unjust war in Iraq."

** FOR MORE PHOTOS and a chronological history of some of the more notable SAW demonstrations, state infiltrations and more, check out: 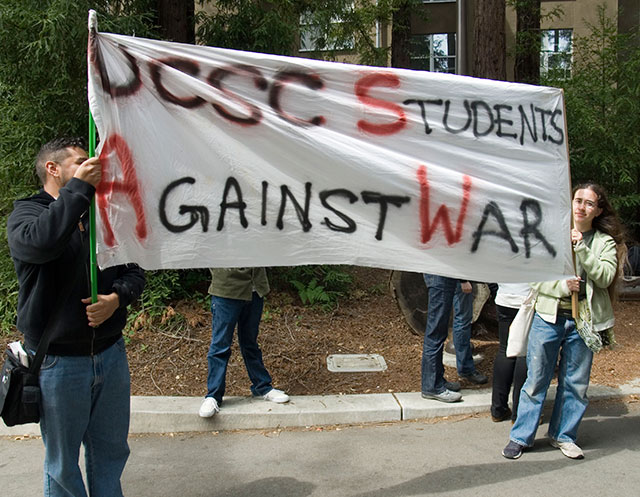 §Video for the Administration
by ~Bradley 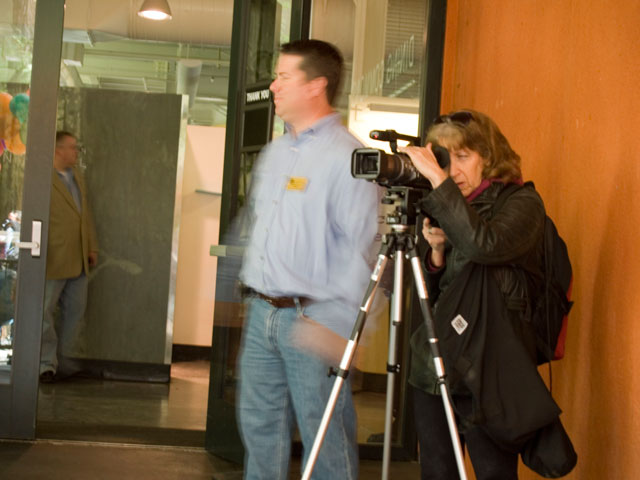 Alma Sifuentes, Dean of Students, stated that the women in this photo was recording video for the Chancellor.
§Part-time Jobs!!!
by ~Bradley 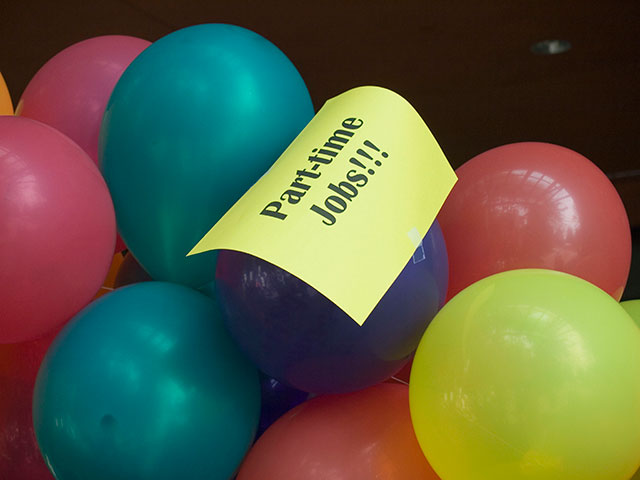 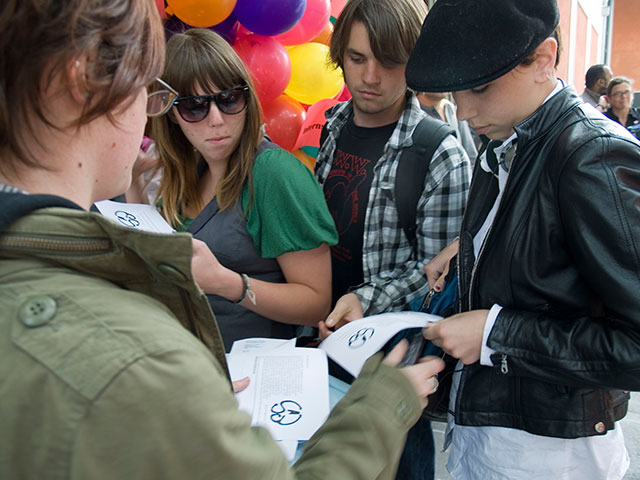 SAW flyers were given to students entering the "Career" Fair.
§Two Hands
by ~Bradley 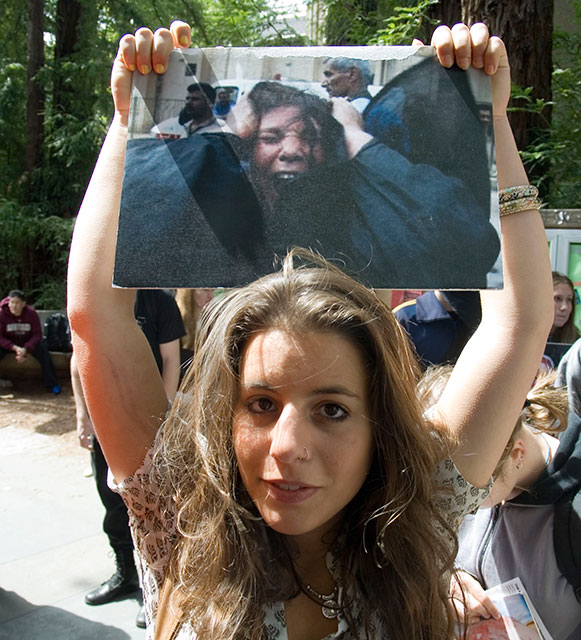 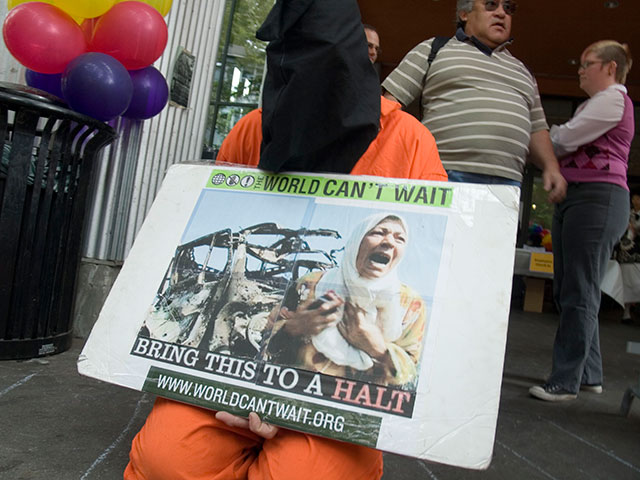 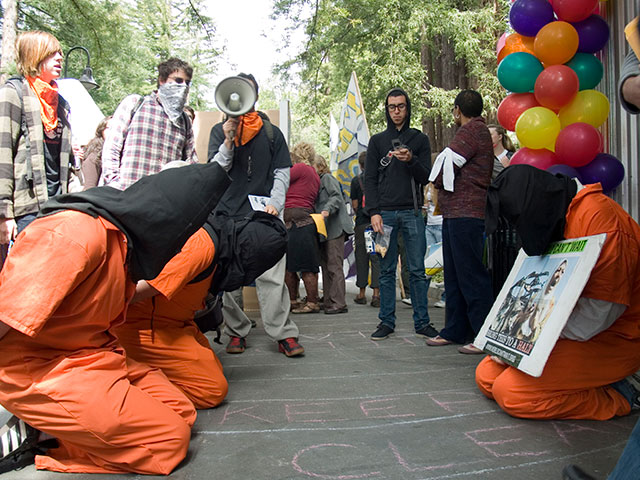 This was the "Keep Clear" area near the entrance. The women with the white armband was one of several faculty members acting as a mediator between UCSC students and administration.
§Triangle and Tea
by ~Bradley 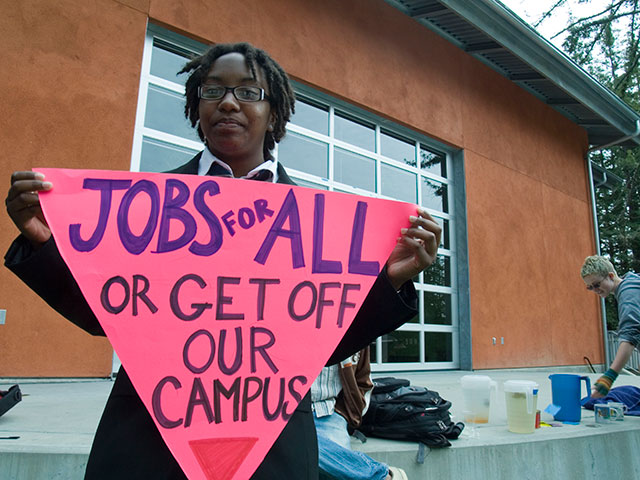 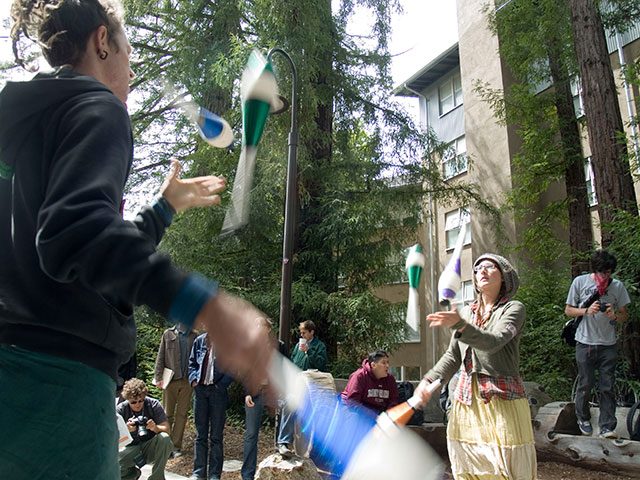 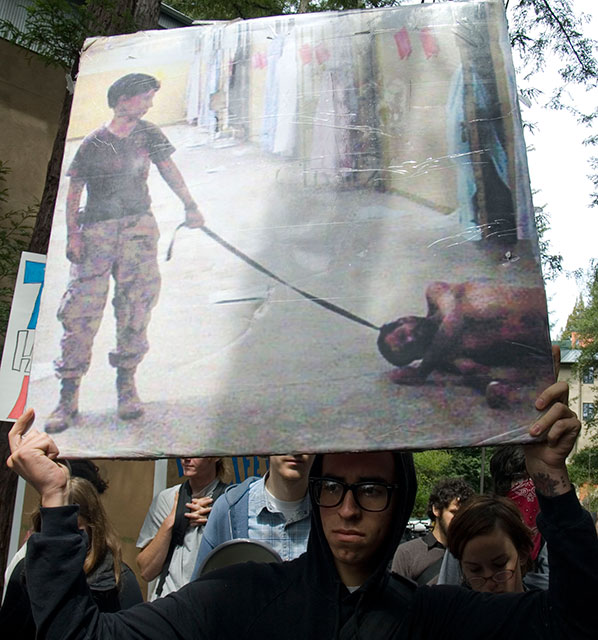 Caption for the photo in the photo: Pfc. England holding a leash attached to a prisoner collapsed on the floor, known to the guards as "Gus"

Lynndie England is a former United States Army reservist who served in the 372nd Military Police Company. She was one of several soldiers convicted by the Army courts-martial in connection with the torture and prisoner abuse at the Abu Ghraib prison in Baghdad during the occupation of Iraq.
http://en.wikipedia.org/wiki/Lynndie_England
http://en.wikipedia.org/wiki/Abu_Ghraib_torture_and_prisoner_abuse
§Student Resistance Inside the "Career" Fair
by ~Bradley 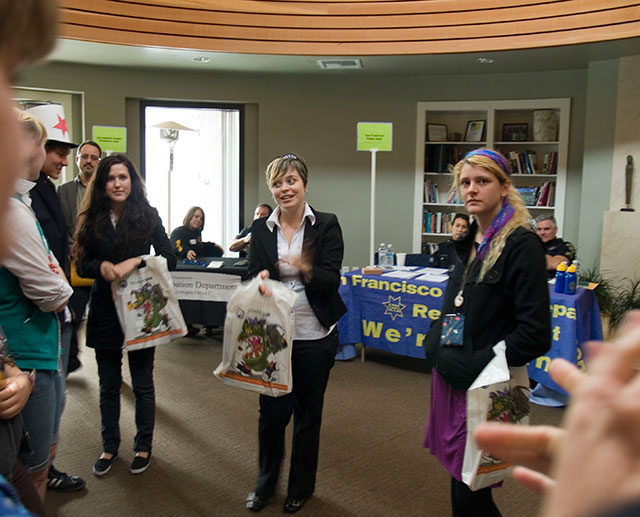 This round room at UCSC hosted Army, FBI, Police (Sacramento, San Francisco and UCSC) and Marine recruiters. Students protested their presence on campus.
§Dance Party and Chanting
by ~Bradley 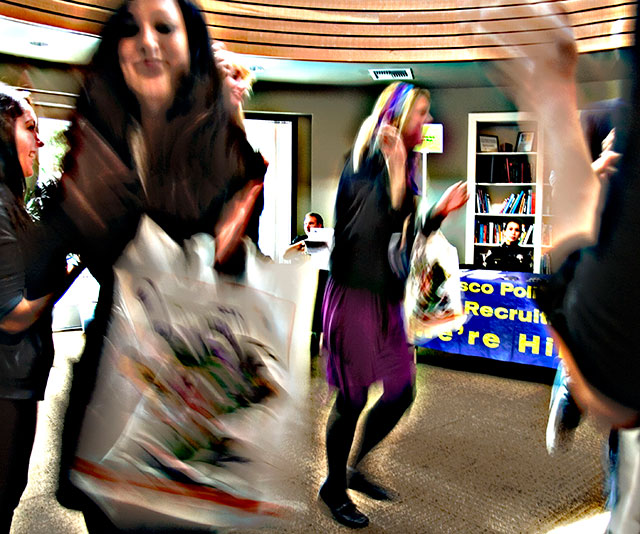 "Money for Jobs and Education,
Not for War and Occupation"

"What are they recruiting for?
Murder, Torture, Rape and War" 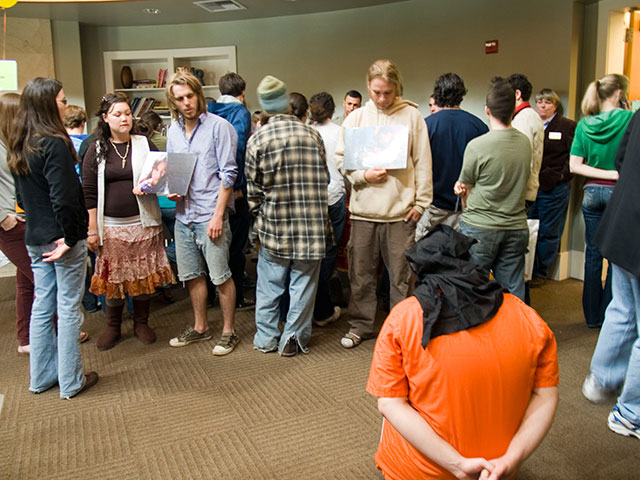 §Unfuck The World
by ~Bradley 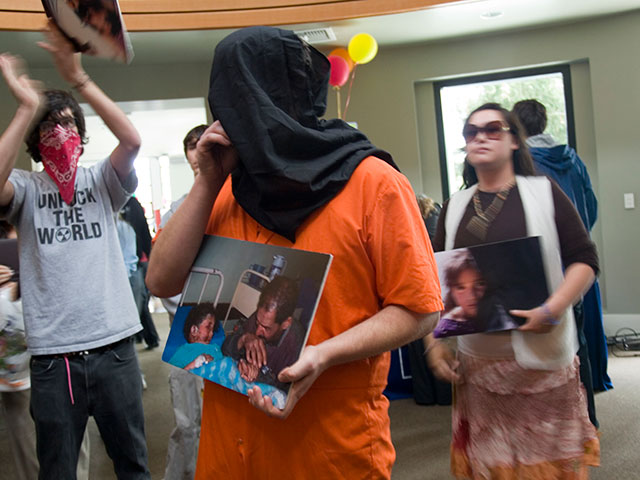 Murder, Torture, Rape and War are horrible "choices" for a "career."

FBI Repression of Activists in the '90s:

"...Darryl and I were on our way to Santa Cruz for an action. But the action was a concert, not a bombing." - Judi Bari
§Army Packing Up
by ~Bradley 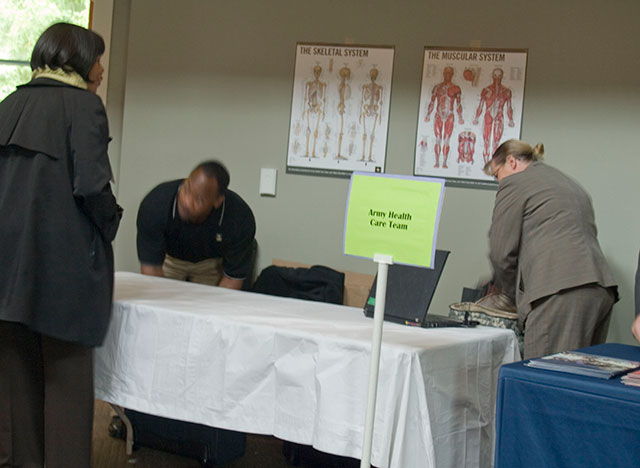 After three hours of trying to recruit in the midst of a protest, both Army recruiters packed up their glossy propaganda at 2:00pm, contrary to the article printed by the Santa Cruz Sentinel on April 23rd, 2008.
§Army Leaving
by ~Bradley Jim Brown of the Santa Cruz Sentinel is wrong in his April 23rd, 2008, article when he writes, "Despite the interruption and occasionally tense one-on-one questioning from activist students, four Marines and Army Health Care Team members who staffed two recruitment tables stayed for the four-hour fair at the University Center, where 90 organizations and companies met with about 800 students and alumni for the Last Chance Job Fair."
http://www.santacruzsentinel.com/ci_9023663

UCSC Students Against War have been effective once again.

** FOR MORE PHOTOS and a chronological history of some of the more notable SAW demonstrations, state infiltrations and more, check out:

Students Rally and March Against Military Recruiters at UCSC "Career" Fair
http://www.indybay.org/newsitems/2008/04/23/18494728.php
Add Your Comments
Latest Comments
Listed below are the latest comments about this post.
These comments are submitted anonymously by website visitors.
TITLE
AUTHOR
DATE
Teaching Our Children
x rebellious pixels
Po po
Nellie
Support Independent Media
We are 100% volunteer and depend on your participation to sustain our efforts!