March, Rally and Direct Action Against Military Recruiters at UCSC on April 22nd

by UCSC Students Against War
As students of UC Santa Cruz, we oppose the presence of military recruiters on campus. As an employer that uses predatory and discriminatory practices in recruitment, recruiters directly represent the homophobic, sexist and racist ideologies that have no place in this University. Furthermore, the military’s inhumane treatment of soldiers during and after tours of duty – through, for example, the neglect of the psychological and medical consequences of war – demonstrates that they view troops not as employees, but as property to be used and then discarded. Recruiters offer false promises of education and opportunity in order to manipulate people in to signing away the fundamental rights to which we are all entitled. We will not let our University be a vehicle for a system based on hateful ideologies and manipulation. We will not let our University be a vehicle to perpetuate the unjust war in Iraq.

It is for these reasons that on Tuesday, April 22 of 2008, UCSC Students Against War will have a counter-recruitment action against the presence of military recruiters on our campus, asking them to leave our campus and never come back. Students of the University of California, Santa Cruz, will have a rally that begins at 10am in the Baytree Bookstore Plaza and proceeds to march to the career fair in the College 9/10 multipurpose room, followed by a direct action. Twice in the past, UCSC students have successfully prevented military recruitment and kicked military recruiters off of our campus. On Tuesday, UCSC students, along with supporting faculty, staff and community members, hope to keep UCSC recruitment-free once again.

Thank you,
Students Against War 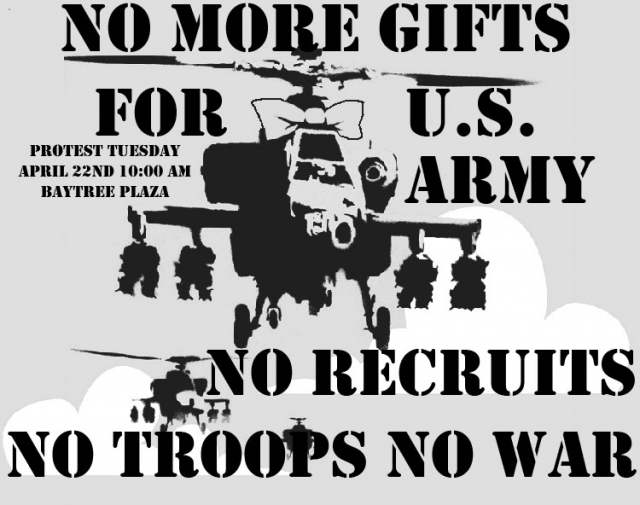 original image (750x592)
No More Gifts for U.S. Army
http://www.indybay.org/newsitems/2008/04/15/18493070.php
Add Your Comments
Latest Comments
Listed below are the latest comments about this post.
These comments are submitted anonymously by website visitors.
TITLE
AUTHOR
DATE
U.S. Marine Recruiters
~Bradley
photos from the demonstration
bradley
Photos
Robbie D. Bomb
In response to pdog...
LaLa
Not sure about these
pdog
Please Call In to Free Radio Santa Cruz! TODAY!
Skidmark Bob
Support Independent Media
We are 100% volunteer and depend on your participation to sustain our efforts!