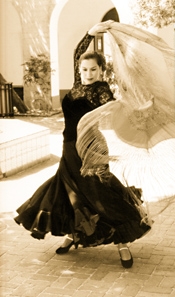 Day and Time: Saturday, April 26, 2008 at 7:30pm
Location: UCSC Music Center Recital Hall (Heller & Meyer Drives, UC Santa Cruz campus). NOTE: There has been a LOCATION CHANGE and this concert will not take place at Holy Cross Church (as previously printed in our season brochures and postcards).

Program Information: The Streicher Trio consists of Violinist Katherine Kyme, cellist Joanna Blendulf, and harpsichordist Charlene Brendler. This program presents a costumed dancer performing historical Spanish dances such as the Jota, Fandango, and Sarabande to Iberian-influenced baroque music. Originally inspired by the idea of dancing 18th-century Spanish steps to the rarely-heard continuo sonatas of Domenico Scarlatti, the program also includes music of Cabezon, Playford, and Lully. Original choreography can be seen in the Fandango of Lopez. Also included is an unpublished set of virtuosic La Folia variations by Swiss composer Albicastro (alias Weissenburg). SF-based dancer Stephanie Neira visually augments the musical experience with choreography and costumes, both original and historical in nature.

This Scarlatti-based program is presented in the context of SCBF's 2008 season theme Musical Legends. During the 4 years he spent in Sevilla, Domenico Scarlatti (1685-1757, born the same year as J. S. Bach) was significantly influenced by the Spanish gypsy and folkloric musics, which formed the roots of flamenco. Upon his relocation to the Spanish court in 1733 and serving as music master to the Spanish queen Maria Barbara he produced 500 keyboard sonatas (over a period of 25 years), many inspired by local dance forms. In the upcoming program Iberian Flare!, SCBF celebrates the dual musical legend of Scarlatti and Maria Barbara, as well as the colorful impact of Spanish folk music and dance on baroque composers.

More information on the program and the artists at our website at
http://www.scbaroque.org/concerts.html

END_OF_DOCUMENT_TOKEN_TO_BE_REPLACED
Added to the calendar on Sun, Apr 20, 2008 10:39PM
Add Your Comments
Support Independent Media
We are 100% volunteer and depend on your participation to sustain our efforts!