Add an Event
Newswire
Calendar
Features
Home
Donate
From the Open-Publishing Calendar
From the Open-Publishing Newswire
Indybay Feature
Publish to Newswire
Add an Event
Related Categories: U.S. | Animal Liberation | Environment & Forest Defense | Government & Elections
Prayer ceremony for Yellowstone buffalo: What a blustery wind can evoke
by Jim Macdonald (jsmacdonald [at] riseup.net)
Wednesday Apr 16th, 2008 12:56 AM
Chief Arvol Looking Horse led a prayer ceremony for the buffalo inside Yellowstone National Park, outside of the Stephens Creek capture facility, from which a record number of buffalo have been shipped to slaughter. This is a report, (not of the prayer ceremony itself, which was not recorded), of the day in context of that and the current buffalo situation. 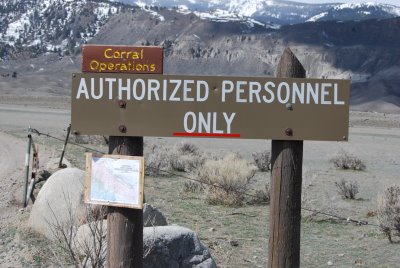 This winter, the buffalo in Yellowstone have suffered enormously, mostly at the hands of the government. To date, at least 1,598 buffalo have been killed, others have been sent to quarantine or are being held in capture facilities. Hundreds more have been dying from the harsh Yellowstone winter. This is a record number of killings. From a total of 4,700 buffalo counted in the fall, the number fell to 3,000 by the end of winter. Since then, at least another 400 have been killed.

This is a travesty, one that has been completely unnecessary. I'm not going to talk about why this is in fact a travesty; there are a million places where the sordid issues and non-issues have been sorted out. I have certainly written about it many times this winter; others have made what seems like a lifetime making the case against the slaughter of wild buffalo.

Instead, I want to focus on the prayer ceremony in the context of the buffalo and in the context of the struggle to end this travesty. While I cannot speak directly to the specifics of the ceremony itself - out of respect for our Lakota friends who asked that the prayer part of the event not be recorded (to which I must assume written recording as well) - I can speak directly to the atmospherics of the prayer ceremony as they relate to where we are now.

Just over 100 people came down to Stephens Creek for the prayer ceremony on a cold and very windy day. Walking with a friend to the spot of the prayer ceremony, which was within view of the capture facility, the wind kept bringing to mind the thought, "Are you sure you want to be here? This is a hard place to be." And, it was hard. Not quite in my view were buffalo being held. All around us were elk and buffalo scat, though neither in sight. You can't get past the idea that these buffalo are almost certainly dead or captured. In a stunning landscape, I found it impossible to ignore the contrast of such beauty and such horror. In me, I felt quite a bit of sorrow and yet at the same time the usual sense of captivation by a place, a place where every inch draws me in.

In the significant group of people who formed the prayer circle were friends and strangers. For me, they were mostly strangers. While we are all drawn together by the buffalo, we are dysfunctional in our familial and community relationships. Who are these people who care as I do about them? What brings us here? Why have we wandered together without knowing each other? It can't help but remind me of what former Yellowstone ranger Bob Jackson talks about when he mentions the familial structures of buffalo herds and how they have been torn apart by the way Yellowstone slaughters animals and sends others to quarantine facilities. Humans too are a scattered and chaotic bunch, and yet here we are trying.

And, yet less so than before. There were familiar faces, people in Buffalo Field Campaign that I've been getting to know, hugging me, telling me how proud they are of us in Bozeman for putting a bison advocacy group together, telling me in quiet whispers how much I belonged in Montana. There were faces in the crowd becoming familiar, not quite so strange. Can a herd be reconstituted after there has been so much stress, so much forced movement? I think that it is possible. From the Lakota and other indigenous tribes who have struggled to maintain their traditional ways following the wake of centuries of genocide, to the buffalo who were wiped off the planet as a chapter in that genocide, and from all of us who have been scattered about, there is hope. And, what better place for hope to be redeemed than in the magical land of Yellowstone.

Chief Arvol Looking Horse spoke before the prayer ceremony in Lakota, which was then translated into English. Besides the occasional familiar word, like tatanka, for me, it was a struggle, much like the struggle he talked about. Hearing through a strong and cold wind, distracted by a large circle of people, faced with an imposing though gorgeous landscape, and right next to the buffalo capture facility made concentration difficult. I could sense, though, that there was a call to change, a call to make right our relationship with the buffalo. All of that could be expected, but the feelings of place, of people, of connection to land and animal - all that one can feel in a moment - you cannot prepare for that. You hear in another language, but that's merely a sign of a larger struggle of connection. It could be powerfully clear in moments, even if I could not catch or remember every word.

I mention that we were able to see the capture facility, though it is currently closed to the public. For this ceremony, the Park Service, represented here by three rangers, allowed us access within several hundred yards of the facility. Two of the rangers showed an active interest in the ceremony, and all to some extent participated. It's hard to understand the conflicts of people enforcing policies that make little sense. I wonder if they could hear people in the crowd talking about what was happening. I could hear, "Worst superintendent ever," and "Biggest interagency nightmare ever." We hear all the time that no one who is a ranger actually supports the buffalo slaughter. Yet, it happens, and some of these rangers carry it out, perhaps out of fear of losing all that they've fought so hard to attain for themselves professionally. And, yet, how is that fear broken or the power that produces that fear?

Since moving to Bozeman at the end of December, I knew that the winter was going to be very rough for buffalo. I knew that the census of 4,700, which was a very high total, meant disaster for those buffalo who have been reduced by policy makers to a disease control issue. Unfortunately, I was right. It didn't take me long to get involved, to meet Buffalo Field Campaign, to meet new people in Bozeman interested in this issue, and begin organizing. It's been wonderful to have the support of Buffalo Field Campaign and the encouragement of members of that group. They are out there witnessing this, suffering as the animals they care about are being destroyed. I've become convinced that they need much more support from the local communities around them if they are going to make it. Seeing more than 100 people at a prayer ceremony suggests that the potential is there. And yet, it's hard not feeling that all efforts are too little, too late no matter what we accomplish in the future.

It was hard not feeling sad. That was reinforced when just before the prayer ceremony began, a Lakota said that the buffalo skull that was to be used in the ceremony had been a Yellowstone buffalo killed on March 5. Somehow, they had attained the skull. In simple honor and yet with a scent of defiance, he reported, "Now, we're bringing him back home." I wanted to cry.

Yet, we were called by our Lakota friends to go with "some peace of mind" and to be happy. It was a hard thought for me, though I think I got "some peace of mind" from the notion of "some." There was still something profoundly beautiful about this place, about this circle, about the spirit of support for a creature that has had a pretty rough 200 years. To be told that by people who are still suffering some of the worst conditions on the earth, the Lakota people, perhaps gave me a little more. And, yet, not full peace of mind. In me was a raging sense of loss, a sense of agitation about the challenges ahead, and a mind consumed by organizing support for the buffalo. When a Lakota woman, who was part of the ceremony, said to one of us nearby, "You are true buffalo warriors," I was struck by the distinction of peace of mind with being a kind of warrior. What an interesting thought; there was perhaps some peace of mind in that.

And, as we filed off, many to go to a lunch, my friend and I to return to Bozeman, the organizing continued. I spoke with Mike Mease of Buffalo Field Campaign about organizing ideas in Bozeman with our new group. At the same time, I was disappointed that I wasn't able to meet contacts with Gardiner's Bear Creek Council. Can prayer and the business of organizing be of the same spirit? I don't see why not. It can feel disjointed to be part of a cathartic experience and then instantly turn one's mind to the business of empowering people to take action. But, for me, I hardly have felt more alive in life than when I'm engaged in that process. It can, at the best of times, feel very soulful. And, besides, I don't sense time to reflect by myself when there is energy to act.

Cold, blustery, and difficult, but it all seemed very necessary. I'm thankful for the Lakota and Chief Arvol Looking Horse for coming so far to pray for the buffalo and for bringing home to Yellowstone a more beautiful moment than so many that have happened at Stephens Creek. I am thankful to have been part of it. Yet, the buffalo keep dying. For those that are still living, many of us feel the call to keep acting. It isn't that the buffalo are the everything of existence, the be all and end all of action, it's just the place where some of us have wandered. It is connected to atrocities of all types, and doing something about this - if done with a heart and mind toward all the others - can change some other dynamics as well; however, it is something deeply experiential that draws us in. Those are difficult thoughts, but the wind and the right moment can bring them home. 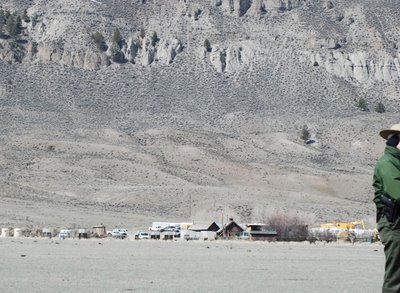