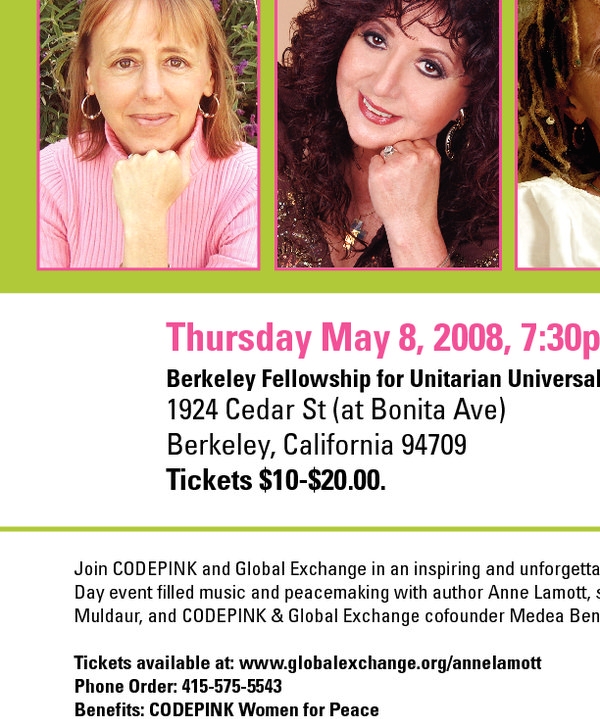 Anne Lamott, writes and speaks about subjects that begin with capital letters: Alcoholism, Motherhood, Jesus. But armed with self-effacing humor – she is laugh out-loud funny – and ruthless honesty, Lamott converts her subjects into enchantment. Actually, she writes about what most of us don’t like to think about. She wrote her first novel for her father, the writer Kenneth Lamott, when he was diagnosed with brain cancer. She has said that the book was “a present to someone I loved who was going to die.” In all her novels, Anne Lamott writes about loss – loss of loved ones and loss of personal control. She doesn’t try to sugar-coat the sadness, frustration and disappointment, but tells her stories with honesty, compassion and a pureness of voice. Anne Lamott says, “I have a lot of hope and a lot of faith and I struggle to communicate that.” Anne Lamott does communicate her faith; in her books and in person, she lifts, comforts, and inspires, all the while keeping us laughing.

Maria Muldaur's roots are in the folk revival of the early '60s, a time when figures like Pete Seeger and Bob Dylan were making bold statements about the civil rights movement, Vietnam, and other burning issues of the day. More than four decades later, in the face of political and social issues in which the stakes are equally high, Muldaur has assembled a group of legendary female performers to lend their voices in a critical examination of where we are as a nation and where we're going. Songs include "Yes, We Can," "John Brown" and "Pray for the U.S.A."

Medea Benjamin, Founding Director of the human rights group Global Exchange, has struggled for social justice and human rights in Asia, the Americas, and Africa for over 25 years. She helped shine the national spotlight on US sweatshops overseas, derail the plans of the World Trade Organization and promote "fair trade" over "free trade." Ever since the tragic events of 9/11, Medea has been organizing against a violent response. She traveled several times to Afghanistan, including with a delegation of 9/11 families, to highlight civilian casualties caused by the US invasion. She is a leading activist in the peace movement and helped bring together the groups forming the coalition United for Peace and Justice. After the invasion, Medea traveled several times to Iraq to organize the Occupation Watch International Center in Baghdad. Medea also co-founded Code Pink, a women's peace group that has been organizing creative actions against the occupation of Iraq. In 2005, Medea organized a delegation of US military families who lost loved ones in Iraq to the Iraqi/Jordanian border to bring a shipment of humanitarian aid for the people of Falluja. In 2005 Medea was nominated as one of 1,000 exceptional women from around the world to receive the Nobel Peace Prize. She is also the author/editor of several books, including Stop the Next War Now.


END_OF_DOCUMENT_TOKEN_TO_BE_REPLACED
Added to the calendar on Tue, Apr 15, 2008 6:20PM
Add Your Comments
Support Independent Media
We are 100% volunteer and depend on your participation to sustain our efforts!