"We unconditionally object to the process and the proposed legislation," their letter states. "The proposal will in no way be sustainable, cost effective, environmentally responsible or successful. It is guaranteed to fail and cost the taxpayers literally hundreds of millions of dollars. The proposal will also enrich a small number of landowners within the San Luis Unit by giving them a perpetual water contract that they can then market to urban areas at an incredible profit, once these untested drainage solutions inevitably fail."

This proposal occurs at a time when Central Valley salmon populations and California Delta fish, including delta smelt, longfin smelt, juvenile striped bass, threadfin shad and other species, are in an unprecedented state of collapse.

Two of the key factors behind the fishery collapses are increases in water exports out of the Delta and declining water quality. The land on the west side of the San Joaquin Valley, laced with selenium and other toxic salts, should have never been irrigated because of the massive drainage problem.

"This drainwater contains extraordinarily elevated concentrations of selenium, boron, chromium, molybdenum, and extremely high concentrations of various salts that disrupt the normal ionic balance of the aquatic system," according to a 1997 report from the U.S. Fish and Wildlife Service.

Continued irrigation of these drainage-impaired lands results in a triple whammy for salmon, delta smelt, longfin smelt, striped bass and other fish that migrate through and reside in the California Delta.

First, the export of water every year results in the deaths of hundreds of thousands of fish, many of them endangered species, that are sucked into the pumps.

Second, the loss of fresh water to the Bay-Delta Estuary caused by the pumping results in the destruction of the Delta food chain. Fish and invertebrates need fresh water - and the mixing between salt and fresh water - to survive and thrive.

Third, the toxic drainage water from west side agribusiness goes back into the San Joaquin River, resulting in the further contamination of an already stressed and degraded ecosystem.

I applaud Bill Jennings and Carolee Krieger for opposing the proposed San Luis Drainage Resolution Act and Settlement Process and standing up to Senator Dianne Feinstein and corporate agribusiness. 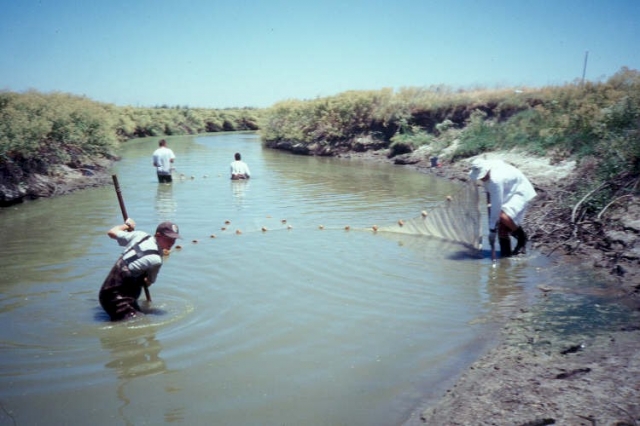 The California Water Impact Network (CWIN) and the California Sportfishing Protection
Alliance (CSPA) are submitting these comments to you and the U.S. Bureau of Reclamation on
the proposed discussion draft “San Luis Drainage Resolution Act.” We unconditionally object
to the process and the proposed legislation. The proposal will in no way be sustainable, cost
effective, environmentally responsible or successful. It is guaranteed to fail and cost the
taxpayers literally hundreds of millions of dollars. The proposal will also enrich a small number
of landowners within the San Luis Unit by giving them a perpetual water contract that they can
then market to urban areas at an incredible profit, once these untested drainage solutions
inevitably fail.

Continued irrigation of these saline and seleniferous lands is a violation of the Public Trust and
Article X, Section 2 of the California Constitution prohibiting wasteful and unreasonable use of
water. Resolution of the drainage problem clearly lies with massive land retirement in the
Western San Joaquin Valley. No other viable or cost effective solution has yet to be presented,
and the proposed settlement is clearly not viable from a technical or financial perspective.
The proposed “solution” is actually no solution at all. The “real solution” was never even
considered in the San Luis Drainage Final EIS, but the US Fish and Wildlife Service put it very
clearly in their Fish and Wildlife Coordination Act report on the San Luis Drain Feature Re-
Evaluation Project (SLDFR) EIS as follows:

“We believe the Service’s Preferred Land Retirement Alternative (full retirement)
[379,000 acres] for the San Luis Drain Feature Re-Evaluation Project would release
Reclamation from any future obligation to provide drainage service to the SLU while
maximizing avoidance of adverse environmental effects. Our contention is that a full
retirement alternative represents the most logical and least risky option to finally solve
the drainage problem from the perspective of protecting and enhancing regional fish and
wildlife resources. This land retirement alternative is compatible with CALFED and
CVPIA goals and objectives by reducing project water demand, increasing available
supplies, enhancing fish and wildlife habitat, and reducing contaminants reaching the
Delta. It is an approach that appears most compatible with both the Service and
Reclamation’s respective missions, since the goal is to find a drainage solution for the
study area which includes measures to preserve, protect, restore, and enhance fish and
wildlife resources affected by water deliveries to the SLU.”

Clearly, the best solution is to retire as much drainage-problem land as possible within the San
Luis Unit, which is a minimum of 379,000 acres and return the water to the environment. This
is the least cost alternative and the most likely to succeed. It could also provide water for
environmental, wildlife and fishery purposes without costly new dams and conveyance facilities.

The proposed settlement and legislation poor public policy for the following reasons:

 The amount of acreage to be retired is less than 1/3 of the amount
identified as the most cost effective alternative in the Bureau's own Final EIS and Record
of Decision for SLDFR (Appendix N), and is clearly inadequate to address all the
potential problems raised by a 9(d) repayment contract that Westlands et al would get in
perpetuity. The linkage between the drainage proposals and the rest of the Westlands
"package" above remain a serious concern, and the setting of such a precedent would
have dire implications for water contracts statewide. CSPA and CWIN unconditionally
oppose this so-called “solution”.

 The solar evaporator mitigation process is incomplete and based on non-scientific
assumptive reasoning, particularly related to water ponding risks.

 The proposed 9(d) repayment contract jeopardizes availability of water for environmental
uses and protection of ecosystems and species already listed as stressed and endangered,
thereby further corrupting the CVPIA’s mandate to restore fisheries and water quality in
the Central Valley and the Trinity River.

 The amount of contaminated drainage water, as well as economic costs/losses will be
much larger than envisaged in the Bureau’s Final EIS because of the lower amount of
land retirement, requiring more treatment and disposal actions than were addressed in the
Bureau’s preferred alternative.

 The decision making process for reducing land retirement totals is not identified or
justified.

 There is uncertainty as to whether the Ecological Risk assessment found in appendix G of
the Final EIS is pertinent to the alternative proposed. There are simply too many
outstanding uncertainties associated with the SLDFR to safely predict successful, costeffective
implementation of a drainage management strategy; manageable wildlife risks;
and, therefore, adequate and feasible mitigation.

 There is a complete lack of any contingency plans to cease water deliveries to drainageimpaired
land and close solar evaporator complexes should treatment, compensation,
and/or mitigation efforts fail.

 There is a lack of compliance with the Fish and Wildlife Coordination Act (FWCA)
related to concentration of Se, TDS, and heavy metals.

 There is a negative benefit to cost analysis for implementation of the project. From an
investor standpoint, investment of this enormous amount of money and resources into a
project with so much uncertainty would be reckless.

The cost ineffectiveness of this proposal alone makes it ludicrous and we wonder how it has
gotten as far as it has, except for obvious political influence peddling by the San Luis
contractors. The National Economic Development Alternative for the San Luis Drainage EIS
clearly showed that the closest alternative to that being proposed in this “settlement” by
Westlands and Interior would LOSE $15.603 million/year in 2050 dollars ($780 million totally).

However retiring the maximum amount of land considered (308,000 acres), would be a net
benefit of $3 million/year for the next 50 years ($182 million totally). This amounts to a public
subsidy of nearly a billion dollars that is virtually guaranteed to fail. It is clear that retiring
379,000 acres would result in even greater cost savings and environmental benefits.

We unconditionally oppose the proposed legislation, the proposed settlement, the proposed 9d
water contract and the proposed Mitigation and Monitoring Plan. Reclamation has refused to
respond to virtually any of the comments on the process and pretends that there is not opposition
to the proposal as a whole. We cannot disagree more strongly with the method and substance of
this so-called settlement process.

This letter notifies you and Reclamation that our organizations oppose this process. It should be
abandoned, and the NEPA process for the SLDFR should be reinitiated as a Supplemental EIS to
consider any new alternatives, including the new evaporation proposal, as well as an alternative
to fully retire the 379,000 acres, as identified by the U.S. Fish and Wildlife Service in their Fish
and Wildlife Coordination Act Report on the SLDFR EIS. Failure to do otherwise would be a
severe breach of the Public Trust, Article X, Section 2 of the California Constitution, and a
violation of the National Environmental Policy Act.
Sincerely,