by Mike Rhodes (MikeRhodes [at] Comcast.net)
2008 has not started out very good for homeless people in Fresno. While there is talk by city officials to make improvements, things have actually gotten worse. This report is a look at some of the things that have happened in the last month that are making life even more difficult for the homeless. 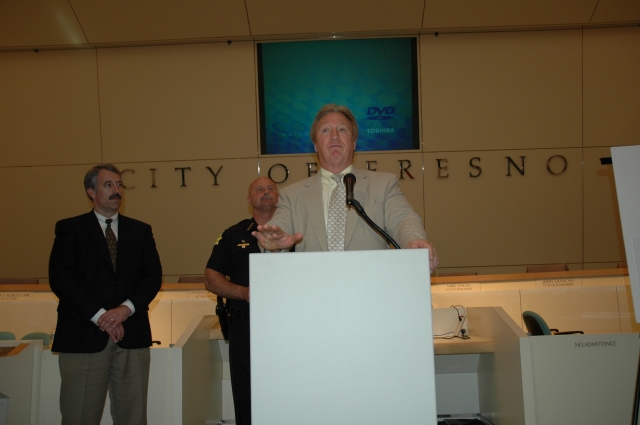 There have been a series of renewed attacks against homeless people in Fresno over the last couple of weeks. These attacks have been carried out by city officials, a vigilante businessman, and gang members. This week also featured a Press Conference where our mayor announced a crack down on crime in homeless areas. Asked if homeless people should be concerned about the increased police presence in their encampments, mayor Alan Autry reminded his audience that jail might be a good thing for homeless people. “In my studies of this over the last 15 or 20 years, a lot of folks made a decision to get off drugs and pursue a better life while in a jail cell,” Autry said. Looking on the sunny side of the jail experience, Autry concluded that jail might be “the only place they could go to get dried out or off of it for a while.”

Autry also commented on the ongoing lawsuit against the City of Fresno by homeless people who had their property taken and immediately destroyed by the city. Autry said “I still feel that when we took the encampment that we did it was a good thing. When we cleaned out all of the horrible stuff that was there, hypodermic needles, mattresses that had hepatitis all over them, that a good thing was done. But, the way it was done in terms of unfolding to the media was poorly done and I have regrets on that because if we had done this same type of process, even though the right thing was done, I do not agree with the court decision.” In other words, if the city had properly spun the taking of homeless peoples property to the media, it would not have been a problem. The entire Press Conference centered on treating homelessness as a police problem. There were no proposals about ending homelessness, rather the approach was to put an end to the homeless through police suppression.

In a disturbing new development, earlier this month, bulldozers rolled and homeless people once again had their property destroyed in downtown Fresno. What was different about this incident is that it happened on a vacant lot owned by an individual (or corporation) and did not take place on public property owned by the City of Fresno or Caltrans. What happened is that a group of about 30 homeless people who live between the railroad tracks and H street (south of Ventura) were told on Wednesday, March 12 to move. A man, who said he owned the property, told the residents they had until Friday to move. He presented no evidence that he was the owner and several homeless people I spoke to on the following Saturday said he just rented a building next to the lot and was not the actual owner of the property. The Fresno Police Department came by on Thursday and warned the residents that a “clean up” was going to take place the next day. The police returned on Friday when a dispute developed over property rights. Guess whose side the police took? On Friday, I got a call from Dee, a homeless resident in that encampment, who said all hell was breaking loose. Dee said that a big dumpster was put in the middle of the field and as we talked, she described the scene as a bulldozer was brought onto the property. On Saturday, when I went to the site of this attack, the field was cleared of all the tents and shelters that had been there the day before. I talked to Dee and Manuel who said that a lot of homeless people lost everything they owned as the bulldozer swept through the area. The dumpster was filled with their tents, sleeping bags, food, and anything else they did not have time to move. Geno, another homeless resident of the lot, said his cat was killed by the bulldozer.

Does the property owner have a legal right to remove homeless people from their property? They probably do. But, can they destroy homeless peoples property in the process of the removal? Probably not. This could result in another legal challenge as homeless people fight to defend their rights in this community.

Bruce Tracy, featured in the Fresno Underground story on Indymedia about 4 months ago (see: http://www.indybay.org/newsitems/2007/11/11/18460272.php ) was attacked by what he described as Bulldog Gang members. Tracy said he woke up one night as someone was beating on his roof and the entrance to his home. “I tried to scare them off, but they just kept on attacking me,” Tracy told me in a phone interview. He ended up having to abandon his home and watched as they burned it into the ground. Tracy said he tried calling 911 but the police were not responsive.

Fresno City Council member Brian Calhoun is pushing hard to make it illegal for homeless people to request money while standing on median islands. He says the practice is unsafe and is seeking to pass an ordinance that would prohibit anyone from asking for money by holding a sign on a median. There is already an ordinance that prohibits “aggressive” panhandling and an ordinance was passed last year making it illegal for homeless people to push a shopping cart. These laws, we are assured, apply equally to the poor and rich alike.

Calhoun introduced this proposal on March 11 (see: http://www.indybay.org/newsitems/2008/03/21/18487784.php ), but it was not acted on because the council wanted to have a representative from the Fresno Police Department participate in the discussion. The ordinance was first introduced on “Kids Day,” which is a fund raiser for Children’s Hospital. On that day, there were hundreds of volunteers standing on street corners, on median islands, and even in the middle of the street. Calhoun himself is well known for setting up a table on City street corners and waving at passing drivers.

On March 25th the item returned to the Fresno City Council. In a 4/3 vote they agreed to direct staff to design an ordinance that will prevent homeless people from holding signs asking for help on the median islands of city streets. There was a lot of concern expressed at the meeting about how this ordinance would affect “legitimate” groups like the Fire Fighters, Kids Day, and other respected groups. Council member Westerlund came up with a novel approach to address this concern - he suggested that groups or individuals could apply for a permit to use the median. That way the city can harass the homeless while allowing the more respectable organizations to use the medians to collect money. Voting against moving forward with the proposal was Steerling, Perea, and Duncan.

Almost four months have passed since the executive director of the Bush administration’s Interagency Council on Homelessness, Philip Mangano was in Fresno to encourage the City and County of Fresno to develop a new and more enlightened plan on homelessness. Both the City and County enthusiastically agreed to cooperate and work to provide homeless people descent and affordable housing and to address the issues that made them homeless in the first place.

Since then, to the best of my knowledge, very little has happened. A “panel” has been appointed to look into the homeless problem and make recommendations. Also, the City of Fresno has authorized the funding of a job for a “Homelessness Czar.” When I talk to the people who are homeless in this community, they tell me nothing has changed. They want to know how there can be millions of dollars coming into Fresno to address the homelessness issue and none of it goes to help the homeless. All I can tell them is that there are some very well funded organizations that have been set up to address the issue. The directors of these projects are well paid and know how to get money into their programs. What most of these groups do not know how to do is to help the homeless. Most homeless people nod and agree when I use the term “poverty pimp” to describe this situation.

It would be inaccurate to describe the leadership of the City of Fresno as poverty pimps. All of the homeless policies coming from the city in the last several months have one thing in common, they are all punitive. They have forced homeless people into tool sheds (with no heating, indoor plumbing, or even electricity), they are working on passing an ordinance to make it illegal for homeless people to ask for money, and the police are protecting property owners who are bulldozing homeless peoples property. When will the City of Fresno move from police suppression, attacking homeless people with legal clubs, and standing by while vigilantes attack the homeless (as was the case with Bruce Tracy and the bulldozing incident on H street)?

What is stopping elected officials from putting proposals forward that would help homeless people. For example, a portable toilet should be put up on G street south of the Rescue Mission. This should be done for public health and safety reasons. A portable toilet there would benefit not only the homeless, but business owners and homeowners in the area. A further step would be for the city to acquire property where the homeless can safely put up a tent. These “free zones” would have portable toilets, trash bins, and security. These are, of course, just short term projects while the city moves in the direction of providing descent housing for the homeless through a project like Housing First.

If anything positive develops, with regards to public policy affecting the homeless in this community, I will gladly publish it. But, until that happens, I will continue to chronicle the shameful treatment of this communities most vulnerable citizens. 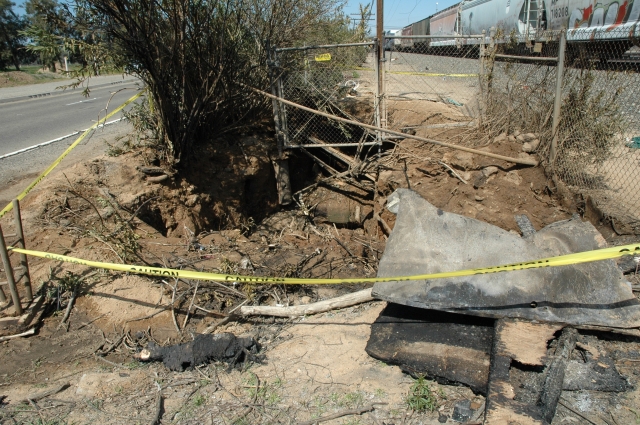 original image (3008x2000)
After the story on Indymedia about Bruce’s underground home, it was featured on CNN and Rippley’s Believe it or Not. This is what was left of Bruce Tracy’s Underground home after vigilantes destroyed it.
END_OF_DOCUMENT_TOKEN_TO_BE_REPLACED
§Fresno Mayor Alan Autry
by Mike Rhodes 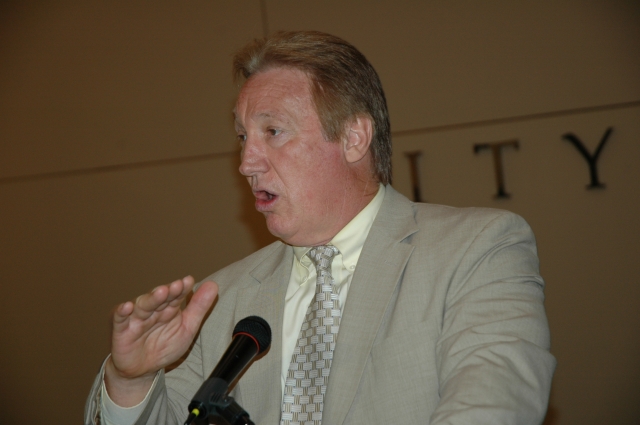 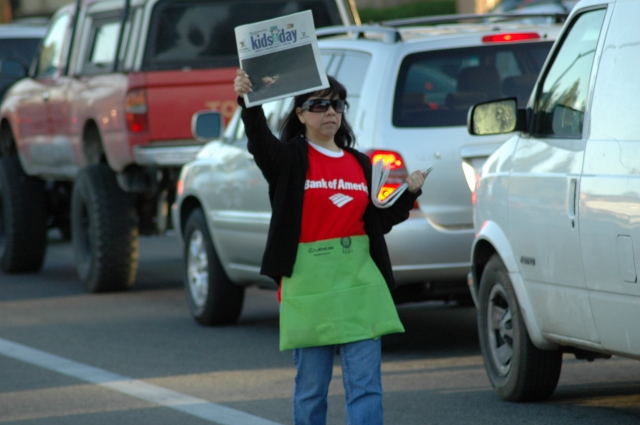 original image (3008x2000)
Al Williams, a homeless man who lives in the Roeding Park area, addressed the City Council on the proposed ordinance. He asked why it was OK for volunteers on Kids Day to ask for money and Brian Calhoun (he introduced the ordinance) to distract motorists with his waving from street corners, but that it was somehow a problem when homeless people ask for money. Some people have suggested that the rich are uncomfortable with seeing such visible signs of poverty standing on medians asking for food or money. Calhoun and his supporters don’t want to be reminded about the homeless in this community - they have no plan to end homelessness, they just want to make it less visible. All photos by Mike Rhodes

END_OF_DOCUMENT_TOKEN_TO_BE_REPLACED
Add Your Comments
Latest Comments
Listed below are the latest comments about this post.
These comments are submitted anonymously by website visitors.
TITLE
AUTHOR
DATE
Fresno has a lot of Homeless Veterans
Ann
Respond here in Indy... the best progressive newsite!
ann g
Foreclosure listings
cp
good job Ann!
kelly
Posted your story on Democratic Underground
Ann G
Support Independent Media
We are 100% volunteer and depend on your participation to sustain our efforts!