Add an Event
Newswire
Calendar
Features
Home
Donate
From the Open-Publishing Calendar
From the Open-Publishing Newswire
Indybay Feature
Publish to Newswire
Add an Event
Related Categories: Central Valley | Police State & Prisons
The Shell Game
by Posted by Mike Rhodes (MikeRhodes [at] Comcast.net)
Thursday Mar 27th, 2008 4:00 PM
The inside story about what is happening in the Prison Industrial Complex 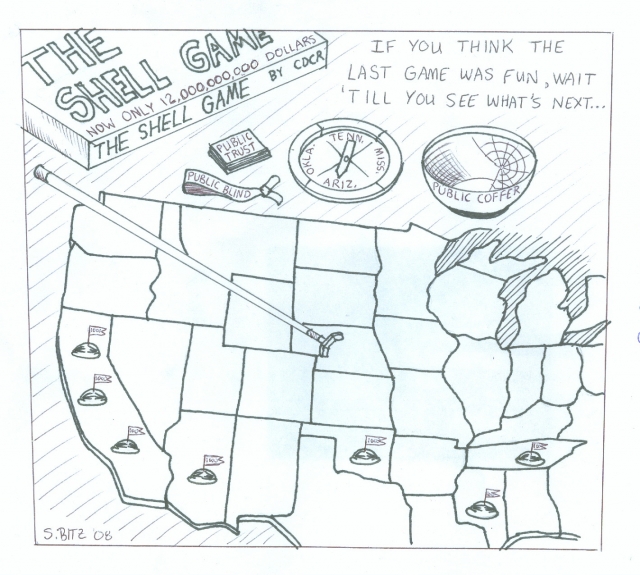 In a recent attempt to bring himself into favor with the public, Secretary of the California Department of Corrections & Rehabilitation (CDCR) James Tilton proffered a tiny press release in guise of a letter to the editor in a February issue of the Sacramento Bee.

In his letter, Tilton declared that "The progress being made speaks for itself when considering current (prison) population trends." Tilton further blurts that "Today's prison population has decreased from a record high of 173,479 inmates in October 2007 to the current population of 170,746 inmates - a reduction of nearly 3,000 inmates, or enough to house one full prison."

Secretary Tilton went on to brag that the CDCR has made "tremendous progress managing it's inmate population." Using the talents of a skilled street corner hustler, Tilton's insubstantial try at conning the public into believing that his industrial complex is reducing the prison population by thousands is a bald face lie.

The CDCR's prisoner population was indeed 173,479 in October of 2007 as Secretary Tilton spewed in his letter to the Sacramento Bee. According to Tilton's letter, California has forcefully transferred "more than 2,500 inmates" to out-of-state private prisons. The number of transferred prisoners to date is closer to 3,000 which means that California's prison population hasn't gone down at all since October of 2007 as proffered by Tilton.

When prisoners are transferred from California prisons to out-of-state ones thousands of miles away, they are still charges of California's prison system. The tax payers of this state foot the bill to the tune of $43,000 plus for each citizen they lock up whether that prisoner is in Solano State Prison in Vacaville California or the Dixie-Doodle sweat farm in Deliveranceville Mississippi.

The $43,000 goes up for additional medical costs and transportation to-and-from the out-of-state prisons. All the prisoners transferred Tilton refers to must be flown back to California where they will be paroled by law.

While Secretary Tilton boasts about the terrific job he is accomplishing in "reducing" the prison population, 3,000 prisoners are being hidden in Arizona, Oklahoma, Tennessee and Mississippi - out of sight, out of mind. Again, they are still California prisoners being housed by California tax payers and will all eventually be brought back to this state - every single one of them are coming back to California! Has the prison population really gone down? No!

Let's factor in a few more numbers. In Los Angeles county alone, there are more than 20,000 prisoners waiting for a state prison bed. The average California state prison holds approximately 4,000 prisoners which means that there are about five prisons worth of warm bodies (just in L.A.) ready for warehousing in California, or one of the many contracted private prisons throughout the country. Then there are the thousands of others waiting captivley in county facilities all over the state waiting their turn for space in the warehouse.
Buried deep in the typical fuzzy math dished out by Secretary Tilton and company is the truth, and truth be known, California's prison population is what it has been for quite some time - overcrowded. The annexation of California's prison warehouse system in far away private prisons, is proof in and of itself that nothing substantial is being done to solve California's
massive prison overcrowding problem.

When Governor Arnold Schwarzenegger signed AB-900 into law, the $7.4 billion dollar bill (of borrowed money) was earmarked for the “upgrade (of existing) prison facilities” of “53,000 additional prison beds.” In light of those facts, the powers that be, from Schwarzenegger and Tilton on down, will look you straight in the eye and tell you that they are bringing California’s prisoner population down. Why build 53,000 new prison beds, why not place a population cap (as originally planned) on the system and use the newly opened beds for medical and mental health services? Oh yea, that would be too much like right. It’s all fuzzy math - don’t belive it.

If they were seriously interested in bringing the prisoner count down they would be looking at revamping sentencing laws, modifying the money sucking Three-Strikes catastrophe, or how about letting the nearly 10,000 life prisoners out who have served their time (in many cases) decades beyond the prescribed sentence. Let's not forget that lifers after prison have the lowest recidivism rate of all categories of paroled prisoners combined.

In reality, the more people locked up complexes the more money the prison system, private prisons across the country and the mental health, food, security services and in these industrial the guards union, multitude of medical1 more receive from California tax payers. All this to foot the massive corrections bill which now exceeds $12 billion annually.

It becomes even more scandalous when the children of California have to suffer the loss of educational funding for important services during this fiscal crisis, while those involved with corrections load their pockets and coffers until they split at the seams.

Boston Woodard is a prisoner/journalist who wrote for The San Quentin News, The Soledad Star and edited The Communicator. Boston is not serving a life sentence.