Over 4,000 Dead US Troops in Iraq; Capitola Army Recruiters Stay Open for Business

by ~Bradley (bradley [at] riseup.net)
Protests and vigils were held across the nation on March 24th following an announcement the day before of 4,000 dead US soldiers in Iraq. A demonstration was held at the Military Recruitment Center in Capitola, where a Santa Cruz County coalition known as People United for Peace (PUP) demanded "an immediate end to the killing and occupation in Iraq." One woman was arrested for trespassing as she occupied the Army's recruiting office and refused to leave until the occupation of Iraq is over. 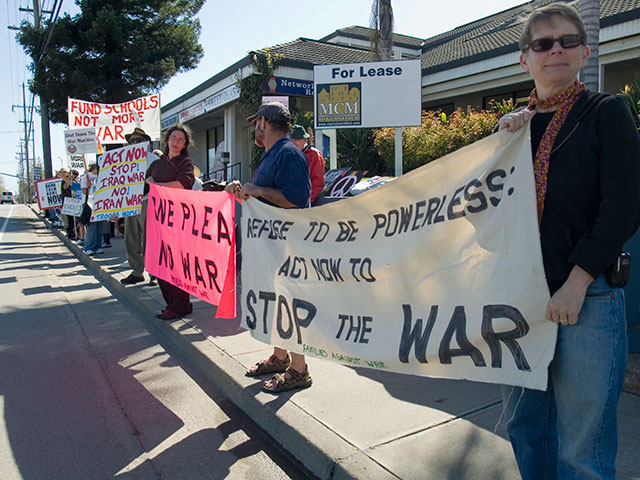 For more on stopping war, check out http://NoArmy.com
For example, FUN WITH TORTURE "See how the Army has helped deal with those boring desert nights. When the lights go off, the party begins. In the army, you too can get in on the action!"
http://noarmy.com/#?browsing=abuses&channel=abuses&video=abu_grahib1
§End Torture
by ~Bradley 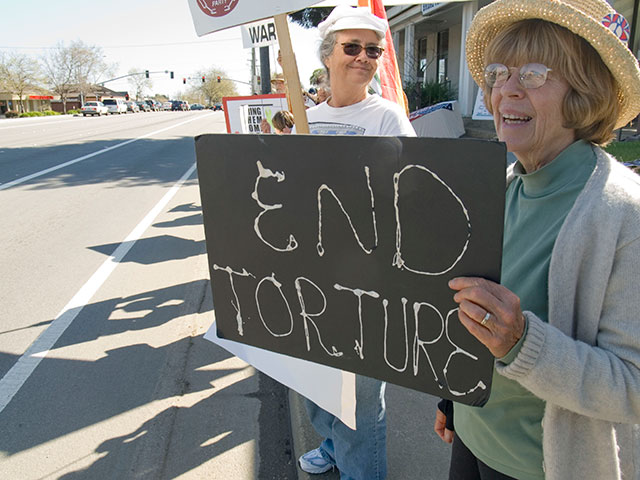 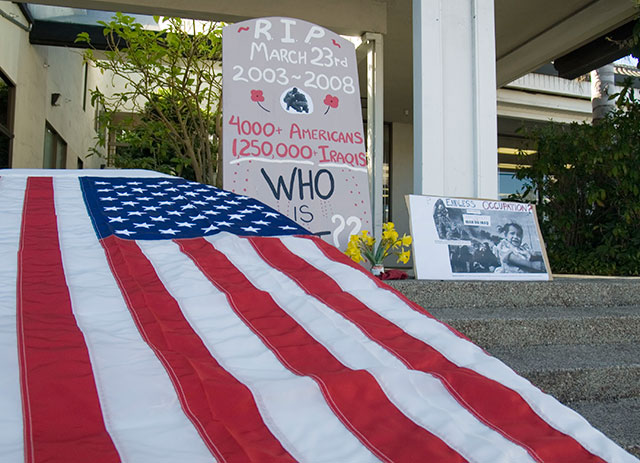 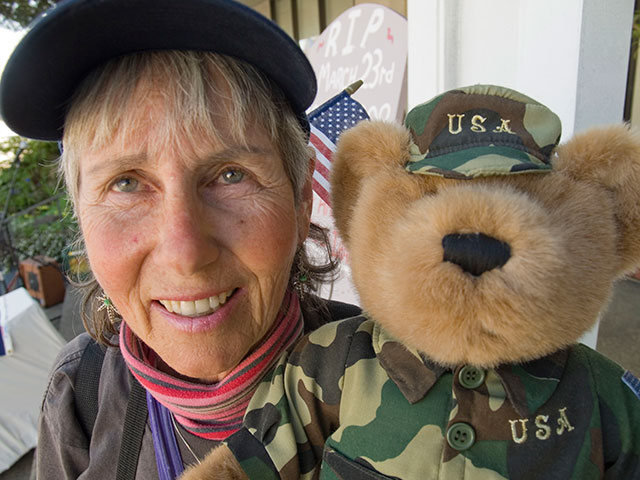 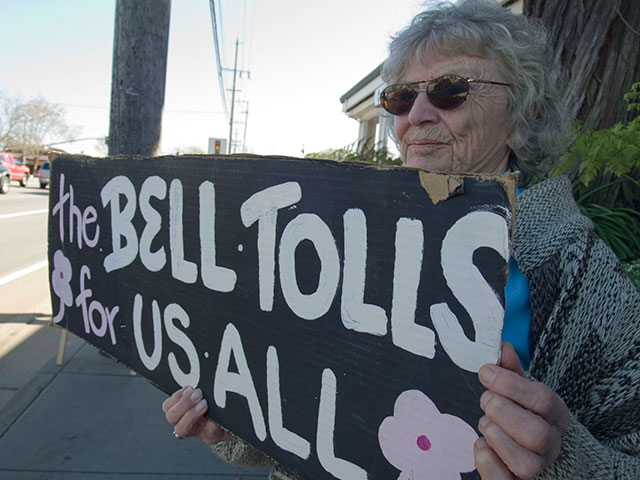 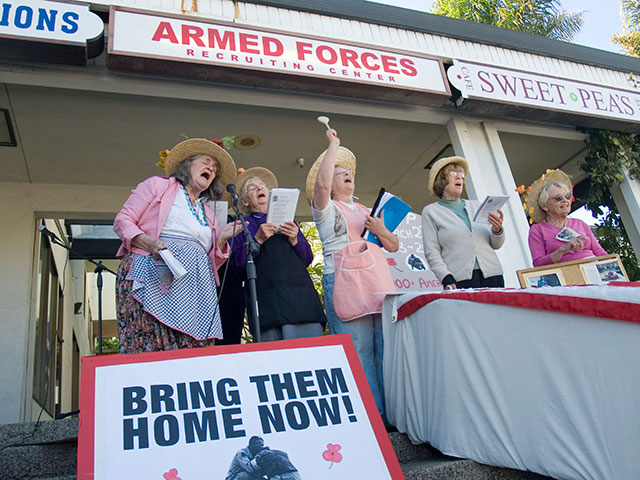 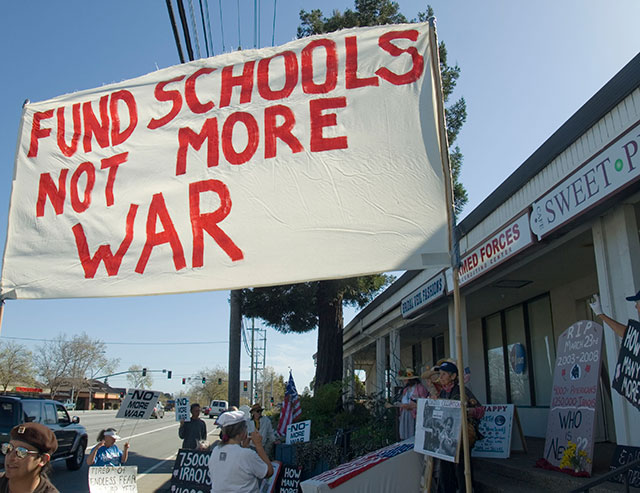 §Fire The Liars
by ~Bradley 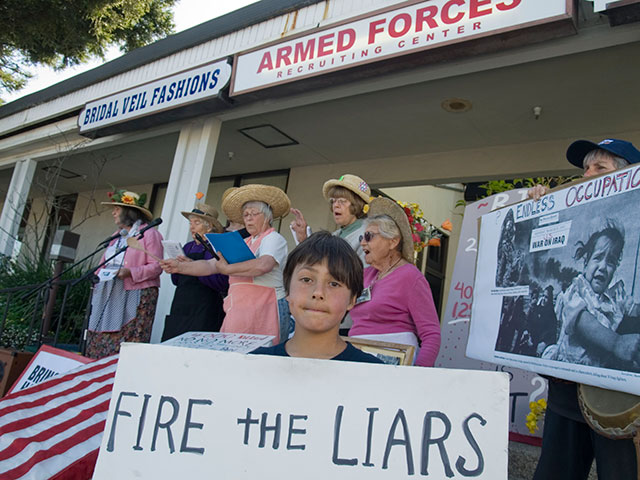 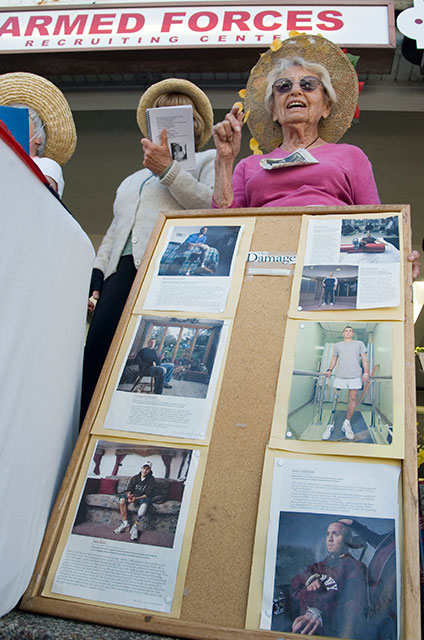 Ruth Hunter holds a board with photos of former soldiers with amputations.
§Air Force, Navy and Marines are Closed, but Army is Open for Business
by ~Bradley 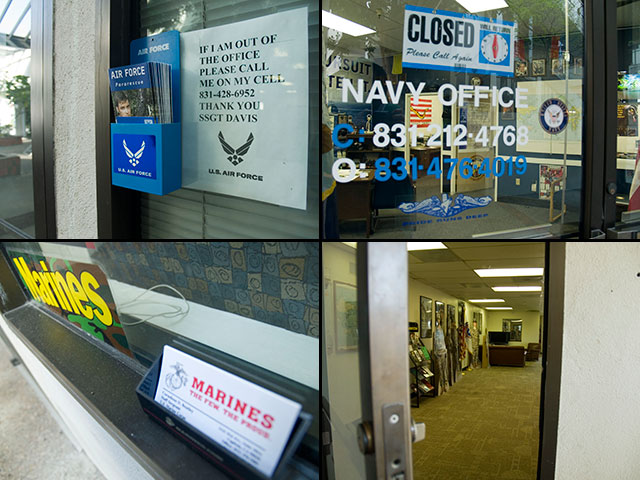 §Mayor's Proclamation from Scott Kennedy to the US Army
by ~Bradley 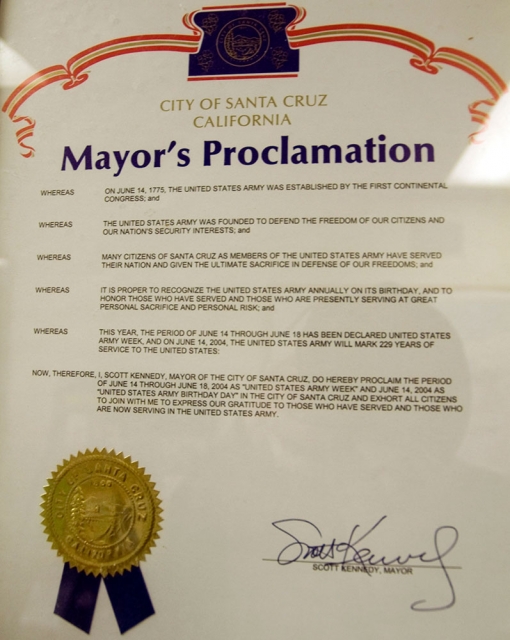 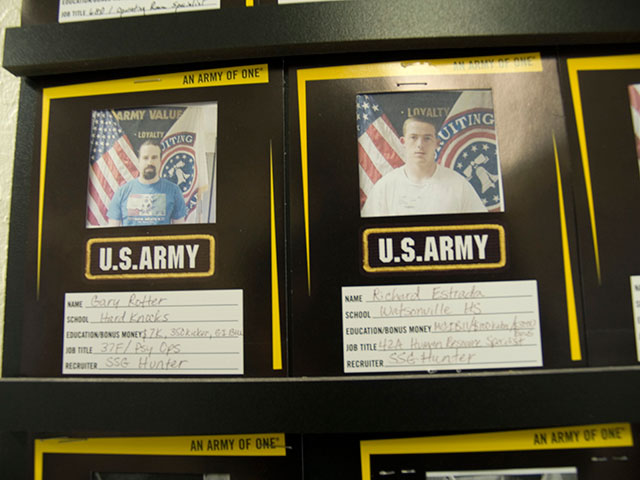 Psychological Operations (PSYOP, PSYOPS), are techniques used by military and police forces to influence a target audience's emotions, motives, objective reasoning, and behavior. Target audiences can be governments, organizations, groups, and individuals, and are used in order to induce confessions, or reinforce attitudes and behaviors favorable to the originator's objectives. These are sometimes combined with black operations or false flag tactics.

This concept has been used by military institutions throughout history, but it is only since the twentieth century that it has been accorded the organizational and professional status it enjoys now.

The word is commonly used by governments, such as the United States, who do not wish to use the term propaganda, which would mar their image. The word propaganda has very negative connotations, and by calling it psychological operations instead, people are much more likely to support it, where they would be unlikely to support the use of "propaganda". This euphemistic naming scheme is ironically an example of psychological operations -- i.e. using psychological techniques to persuade a large number of people to support something that they wouldn't normally support.
http://en.wikipedia.org/wiki/Psychological_operations
§Out of Iraq
by ~Bradley 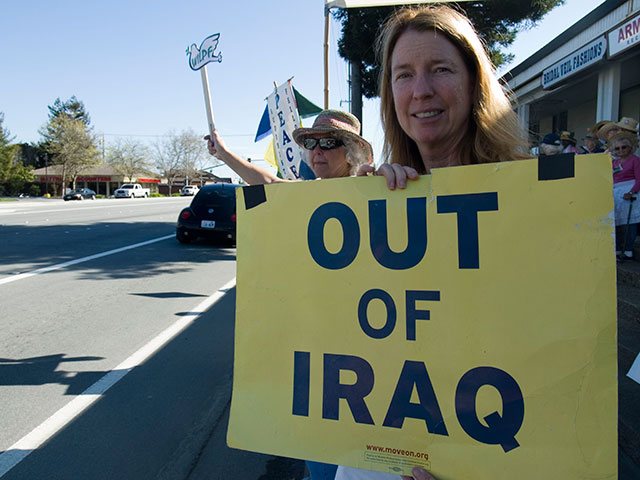 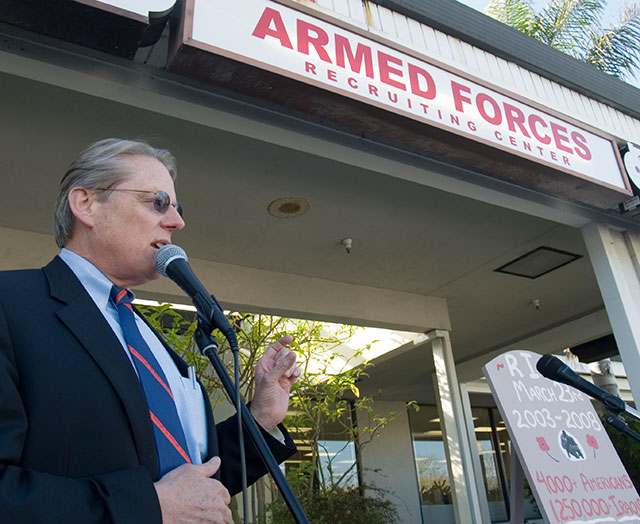 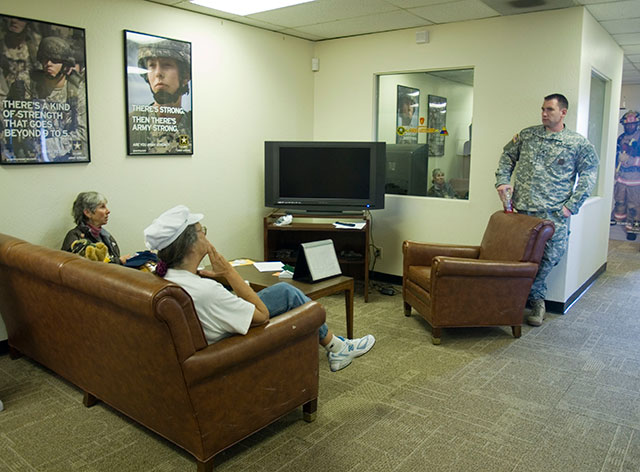 There were many interesting exchanges between Phyllis Greenleaf and Robert Jones inside the Army recruitment office. At one point, Jones stated that recruiters do not really recruit at local high schools. He said that recruiters were not welcome by most of the students and staff, especially in Santa Cruz. Greenleaf kept urging Jones to really listen to the testimonies from Winter Soldier 2008. The testimonies, available at http://WarComesHome.org, are what drove Greenleaf to occupy the Army recruitment office in Capitola.

Jones complained about the media's portrayal of the occupation of Iraq and explained that waterbording is not that bad. He said that only the CIA is allowed to waterboard people, not the Army. Furthermore, Jones insisted that only three people have been waterboarded and it was worth it each time.

According to Wikipedia, "Waterboarding is a form of torture that consists of immobilizing a person on their back with the head inclined downward (the Trendelenburg position), and pouring water over the face and into the breathing passages.[1] Through forced suffocation and inhalation of water, the subject experiences the process of drowning and is made to believe that death is imminent.[2] In contrast to merely submerging the head face-forward, waterboarding almost immediately elicits the gag reflex.[3] Although waterboarding does not always cause lasting physical damage, it carries the risks of extreme pain, damage to the lungs, brain damage caused by oxygen deprivation, injuries (including broken bones) due to struggling against restraints, and even death.[4] The psychological effects on victims of waterboarding can last for years after the procedure.[5]"
http://en.wikipedia.org/wiki/Waterboarding 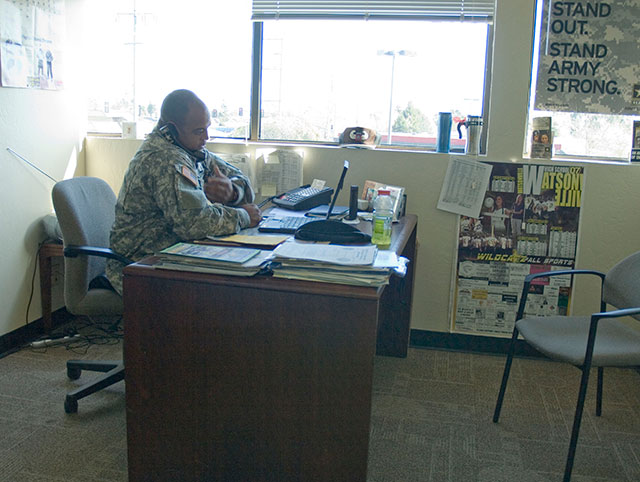 Hunter said that he was not one to engage in debates, so stayed in his office for most of the time that Jones and Greenleaf were discussing the role of the US Army.

I don't want to speculate too much... but the poster on Hunter's wall seems to indicate that he is a fan of Watsonville High School. I wonder why..
§Buckingham
by ~Bradley 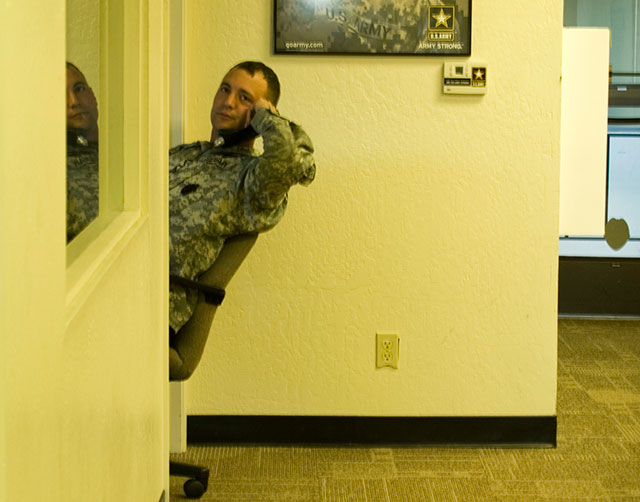 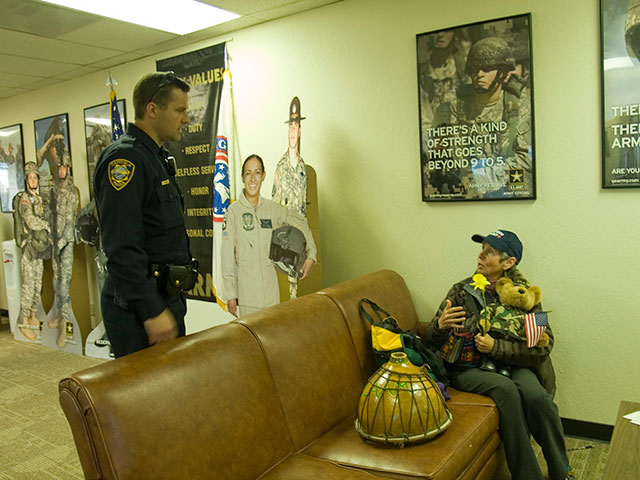 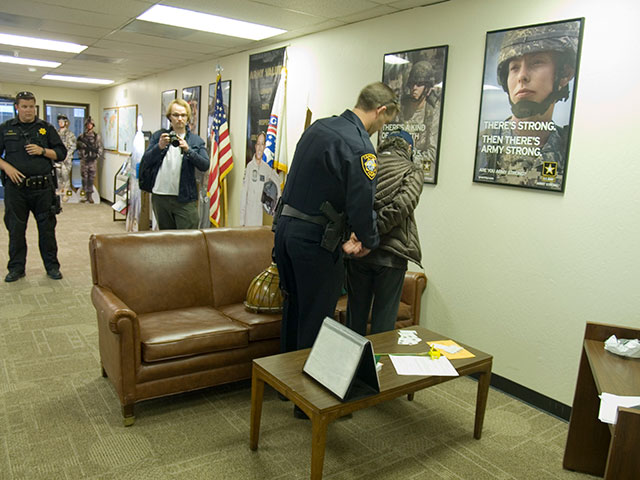 Phyllis Greenleaf is the author of a bilingual book called "I'd Rather Be Learning: How Standardized Testing Leaves Learning Behind and What We Can Do"

"I'd Rather Be Learning" advocates for educational change while focusing on child development and learning and the impacts of standardized testing under No Child Left Behind.
§Phyllis Greenleaf is Issued a Citation
by ~Bradley 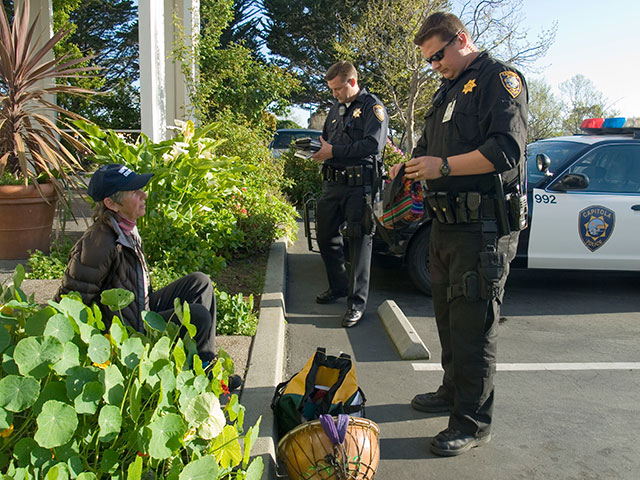 Phyllis Greenleaf was given a citation for trespassing. After officer Blankenship retrieved her identification, Greenleaf was uncuffed and released.
Add Your Comments
Support Independent Media
We are 100% volunteer and depend on your participation to sustain our efforts!