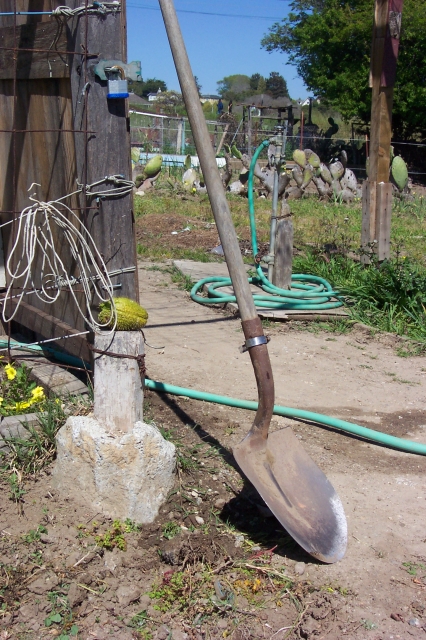 original image (1440x2160)
If you care about food security, open space, green space, public space,... The Beach Flats Community Garden needs your support. The Seaside Company owns the land (Boardwalk) and apparently wants to use the land for something other than feeding local families.

Organize to save our garden! 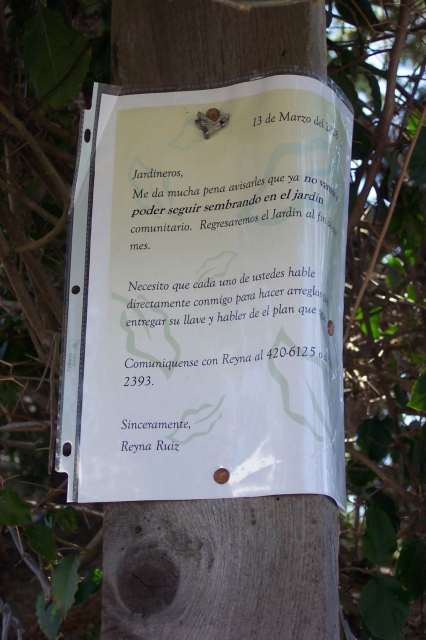 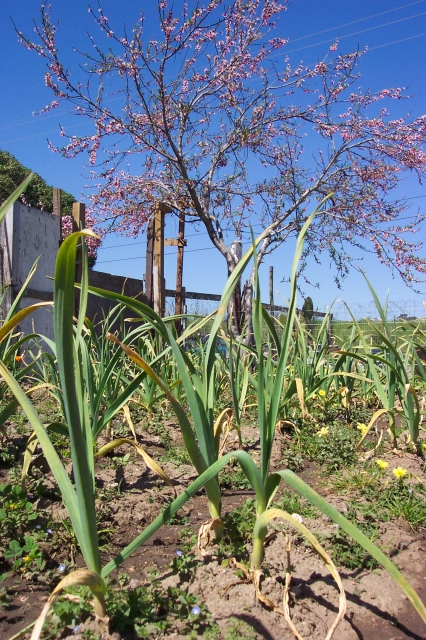 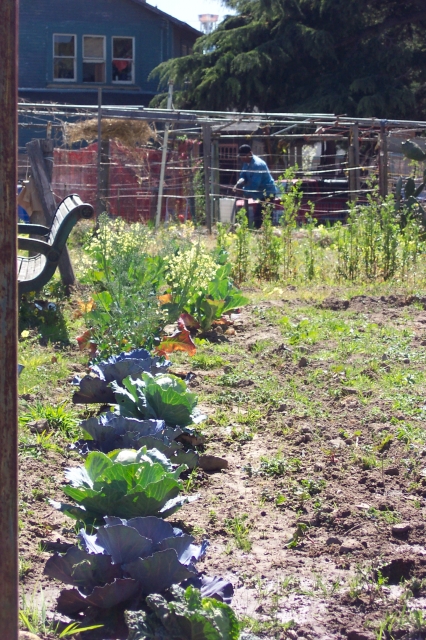 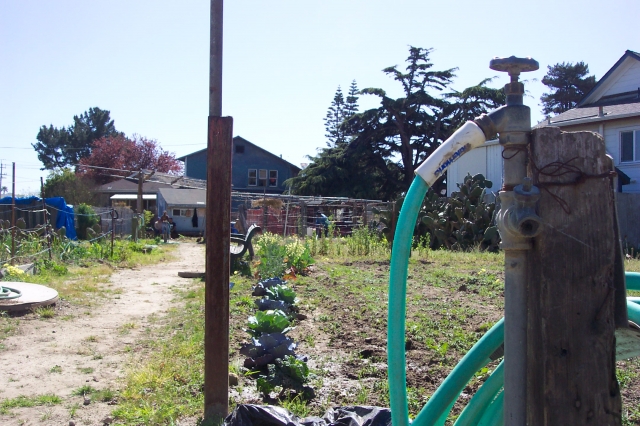 original image (2160x1440)
During the time of year when planting is ideal, when seeds need to be sown, farmers are being asked to abandon their plots, to turn in their keys, to give up their right to work land they've worked for more than a decade.
http://www.indybay.org/newsitems/2008/03/2...
§whole farm
by danielsan
Monday Mar 24th, 2008 10:53 PM 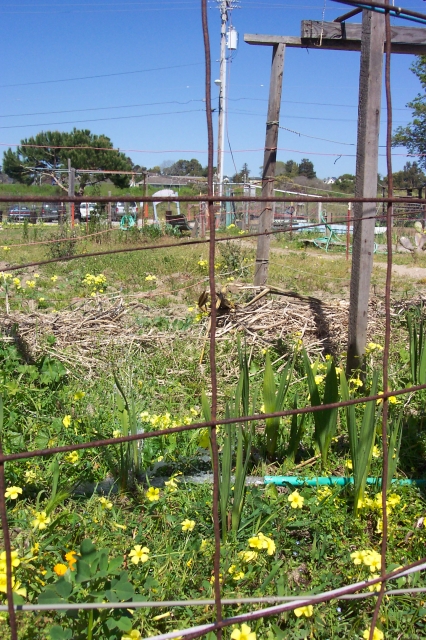 original image (1440x2160)
http://www.indybay.org/newsitems/2008/03/2...
§audio: history (Español)
by danielsan
Monday Mar 24th, 2008 10:53 PM
Listen now:
Copy the code below to embed this audio into a web page:
Download Audio (2.6MB) | Embed Audio
"Q: When did you start working here?
A: I arrived in 1988, and here, planting, I've got about fifteen years.
Q: Fifteen years, continually working this land?
A: Yes, fifteen years, planting. Right now, planting. Here, corn.
Q: What's this over here?
A: That's corn growing.
Q: and what's that growing over there?
A: A flower, called Gladiola. Another guy planted them, but he doesn't come to water them anymore, because he stopped coming after they told him he wouldn't be allowed, since they wouldn't let us garden. He just accepted it. So I'm watering them.
Q: And the plants here produce food, for the tables of the families around here, no?
A: Yes, for the house of those who plant, or those who ask, since they need it, we give to them so nothing goes to waste. It's a good feeling. It's food on the table.
Q: And after all these years, working and planting, there's this announcement. [Foto above] What's it say?
A: The woman who's in charge says not to plant anymore, that they're going to put something else here. They don't want,... well, they're going to clean up around here, and they're not going to let us plant anymore. So that's our problem right now.

Second farmer: I say it's a good thing that they've allowed us to plant food here over the years. We're planting corn, beans, then some flowers. over there, watering flowers, there and here,... the flowers are beautiful.
But the man who planted them, he doesn't come anymore. I come here because I live here. It's like a job.
http://www.indybay.org/newsitems/2008/03/2...
§audio: invitation (Español)
by danielsan
Monday Mar 24th, 2008 10:53 PM
Listen now:
Copy the code below to embed this audio into a web page:
Download Audio (447.0KB) | Embed Audio
"We're throwing out the invitation to everyone to come, for the community to realize what's happening, we're here waiting for you. Come out and work with us. Everyone is welcome. Whomever. We're all equals, so here's something to work on."
http://www.indybay.org/newsitems/2008/03/2...
§sign
by danielsan
Monday Mar 24th, 2008 10:53 PM 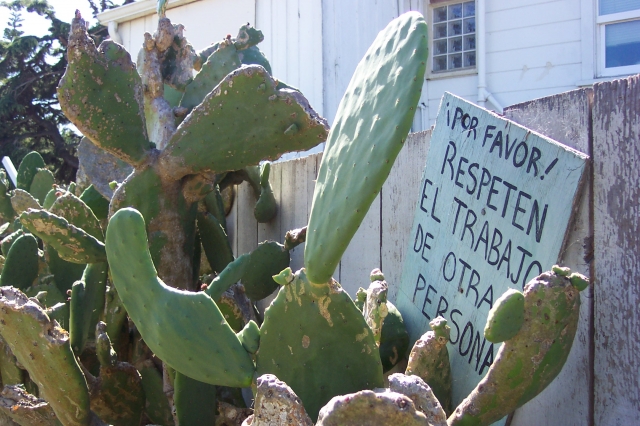 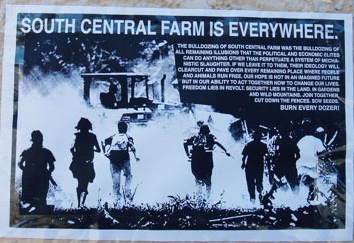 Domingo Mendoza is on the front page of the Santa Cruz Sentinel today, planting romero (rosemary). He's been told he shouldn't plant, that after this week, he'll no longer have access to the land he's worked for about fifteen years.

He pointed out a full grown peach tree in blossom yesterday, and mentioned that he planted it.

The Beach Flats Community Garden has had its ups and downs over the years, constantly reminded that the land is leased, rather than owned, that at any point the land might be taken back. This year, the threat of eviction is a bit more real. The City has created a new garden plot, maybe one twentieth the size of the Community Garden, and has asked the gardeners to give up their keys and stop planting.

The reason? Well, no one really knows, or says. According to the Sentinel, Carol Scurich, Park & Rec's Recreation Superintendent says "It's time to prepare the gardeners for 'the inevitable,'" and move them onto a more manageable plot (the tiny, sandy, adjacent Poet's Park site).

The Seaside Company, which owns the land (and, in fact, most of the Beach Flats in general), didn't return calls from Indybay volunteers, but told the Sentinel's Tom Ragan that the land owners weren't "aware of the change that was taking place" at the garden.

The Beach Flats Community Center, which has managed the garden for years, is headed by Reyna Ruiz. She says the garden is closing because the gardeners lack resources and have been poorly organized. The Poet's Park site will be easier to manage.

No one seems to have a very convincing argument why the gardeners should voluntarily abandon their land, give up access to the garden, and start over in a plot that is dwarfed by the current farm. The gardeners we talked to laughed at the 'replacement' and said they'd never plant there. If the replacement isn't satisfactory and the landowners don't have a plan for the land, why is the transfer so urgent?

For the past two years, anyone who has asked for a plot or expressed interest in helping out has been told that the garden is closing, that no new plots are available, that no one is allowed to get involved. This transition, then, has been in the works for a while. But this was news to most of the neighbors and several of the farmers.

So I've heard three reasons why the garden needs to be abandoned:
1) The Boardwalk wants its land back. Apparently, this is not currently the case. Check.

2) The City wants the farm to move onto a replacement site. It's tough to relocate a working farm, though. After fifteen plus years planting the same dirt--moving is easier said than done. The tiny parcel at Poet's Park is a great starter garden, a wonderful outreach tool to get new people involved in farming, an accessible and visible plot for families, a plot that is significantly easier to manage... but a working farm it is not. Nor is it anything close to a true replacement.

3) The Garden is poorly managed and needs more resources and more involvement from the community. This is the opposite of what has happened for the past several years. This is an excellent reason to have a fundraiser, to open up plots to new folks, to do outreach work, to build bridges with community organizations that support local agriculture, small scale farming, food sovereignty. To talk to CAFF, or Food Not Lawns, or the Free Skool, or UCSC. Of course it's poorly managed and low on resources: it's been practically strangled by mismanagement: No one new has been allowed in for two years in preparation for next week's planned eviction.

If the only reason left for the destruction of the Beach Flats Community Garden is that it is poorly managed, then perhaps management can be put in the hands of the farmers rather than a community liaison. If they lack resources, maybe someone other than Charlie Canfield (Owner, Seaside Co.) or the City of Santa Cruz can lend a hand or send a donation. If the Beach Flats Community Center wants to manage a smaller plot in Poet's Park, I applaud the effort. But that's no excuse for shuttering the current garden. In fact, a demonstration garden is a great idea. Imagine a class at Poet's Park where people learn about gardening and agriculture--and when kids understand how it works, then they're ready to take on a whole plot at the adjacent farm.

Reading the Sentinel today, I was even angrier: They're not even going to pave over the garden and use the land for storing dumpsters or a parking lot or whatever other rumors are out there. The plan is to just abandon the land, to leave it to wilt and collapse in disrepair, untended. It's an injustice that needs a better answer than poor management, especially when that's the reason that's coming from the manager.

Tonight's meeting is a chance to get involved, to find out some answers, to save the garden before it's too late. No one has yet given a good reason to close the garden. If the gardeners need resources, I'm sure there are folks in the community ready to share. If they need more involvement, maybe all the folks who've been turned away in the past few years will come back and plant. If they need better management, then maybe someone will step up and coordinate.

The sun is shining and the soil is rich. It's time to plant. 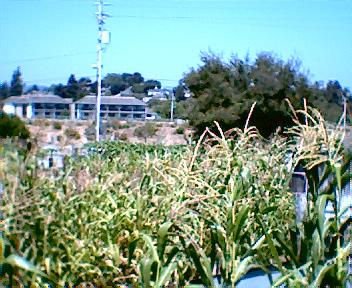 awesome Danielsan.
I don't feel completely qualified to comment on tonight's meeting because I don't speak spanish.
I would like to see something here so here is my paraphrasation.
The city parks n' rec superintendent Carol Scurich and community center leader Reyna Ruiz were
both present as were many of the local farmers, neighbors and farming activists and enthusiasts.
Both Scurich and Ruiz confirmed the sentinel article by stating that it was a management burden and not
the intention of the seaside co. to change the existing arrangement. Several of the farmers expressed
their dismay that the garden would sit unused and increasingly weedy. Reyna insisted that she'd
need to see some commitment to longterm involvement, a contractual agreement of duties by gardeners
and local citizens intent on keeping the garden operating and a grant proposal to help the city pay
its yearly lease to the seaside co. of $4400 and for increasing the "dignity" of the state of the garden.
She admitted to denying a compost dump container program and had closed the garden to new farmers
for the last 2 years. She shared her disappointment in the lack of funds for things like more farming
tools and equipment and an over-all improved state of things. Scurich stated that she would not go to
the seaside co. to report any change in her current plan to close the garden or any new arrangement
with the property and the gardeners unless a firm proposal was in her hands by next week.
Several of the attendees verbally committed to creating a proposal and a phone list was circulated.
All agreed to meet once more at 5pm next Thursday April 3 to discuss a proposal.

Well, that's my memory of the thing.

http://myspace.com/loveguttermusic
Add a Comment
Support Independent Media
We are 100% volunteer and depend on your participation to sustain our efforts!