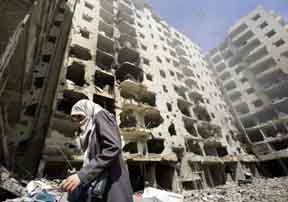 With a report and discussion by Zeina Zaatari—activist with the National Council of Arab American, who traveled to Lebanon during the 2006 war.

“A Summer Not to Forget”
a documentary on the 2006 U.S./Israeli war against Lebanon

On July 12, 2006, Hezbollah captured 2 Israeli soldiers. For the following 34 days, Lebanon witnessed continuous Israeli bombardment. This documentary takes you beyond the headlines into the harsh realities of war. It explores the devastation of a nation and a people caught under siege.

Through powerful and often disturbing images, this film tells the story of yet another war on Lebanon: 1,200 civilians killed and 4,000 injured, more than one million people displaced, 78 bridges destroyed, 15,000 homes damaged, the environmental disaster of 15,000 tons of oil spilled on 80 km of Mediterranean coast, and many more catastrophes. In footage not shown by the western media, the film also exposes the devastation of 57 collective massacres in an attempt to capture the horror of its victims and their families. Directed by Carol Mansour, 27min.

“Children of Shatila”
a story of the Palestinian diaspora

Many people first became aware of the Shatila refugee camp in Lebanon after the shocking and horrific Sabra-Shatila massacre that took place there in 1982. Located in Beirut's "belt of misery," the camp is home to 15,000 Palestinians and Lebanese who share a common experience of displacement, unemployment and poverty. Fifty years after the exile of their grandparents from Palestine, the children of Shatila attempt to come to terms with the reality of being refugees in a camp that has survived massacre, siege and starvation.

Director Mai Masri focuses on two Palestinian children in the camp: Farah, age 11 and Issa, age 12. When these children are given video cameras, the story of the camp evolves from their personal narratives as they articulate the feelings and hopes of their generation. 50min., 1998, Arabic with English subtitles.

END_OF_DOCUMENT_TOKEN_TO_BE_REPLACED
Added to the calendar on Sat, Mar 22, 2008 5:29PM
Add Your Comments
Support Independent Media
We are 100% volunteer and depend on your participation to sustain our efforts!