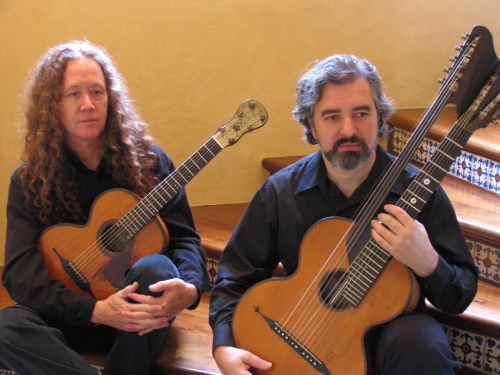 Join the legendary court of Nicholas II in a program featuring rare and delightful 19th-century arrangements of arias by Mikhail Glinka (1804-1857) performed on Russian 7-string guitars.

Program & Artist Information: The Russian 7-string guitar, an instrument that differs significantly from the Spanish guitar in construction, tuning, and technique, became popular in Russia in the late 18th and 19th centuries. The members of the famous “Mighty Handful” – Mussorgsky, Borodin, Rimsky-Korsakov, etc. – were not even born yet, but virtuosic and original music was already being written for the Russian guitar. But after the rise in popularity of the Spanish guitar, following the 1926 Russian tour of the famous guitarist Andres Segovia, fewer and fewer people in Russia still played the national variety of the instrument, and the fascinating art of the Russian guitar tradition was neglected even in Russia.

Starting in the 1990s, the guitarist and musicologist Oleg Timofeyev began researching and reviving this tradition and introduced this beautiful music to Western audiences. For the first time, this beautiful music was introduced to Western audiences. On one of his tours, Timofeyev teamed up with John Schneiderman (himself a virtuosic player of the baroque lute and the 19th-century Western guitar), who was quite interested in pursuing a project involving Russian music. This collaboration was the beginning of The Czar's Guitars!

Their March 14 concert for SC Baroque Festival features 19th-century transcriptions of the works by Mikhail Glinka (these guitar part books are associated with the St. Petersburg guitarist Vladimir Morkov, who knew Glinka personally and made a number of expert arrangements of the composer’s symphonic and operatic works for 2 guitars). Although better known than the Russian guitar tradition, Glinka’s beautiful music is still too rarely heard in the U.S.

Online: http://www.scbaroque.org ~ Per Phone: 831-457-9693 ~ Email Us: info [at] scbaroque.org
(Tickets to all events also available through the UCSC Ticket Office and Santa Cruz Tickets)

All Season Concerts begin at 7:30 and take place at the UCSC Music Center Recital Hall

END_OF_DOCUMENT_TOKEN_TO_BE_REPLACED
Added to the calendar on Wed, Mar 5, 2008 1:46PM
Add Your Comments
Support Independent Media
We are 100% volunteer and depend on your participation to sustain our efforts!