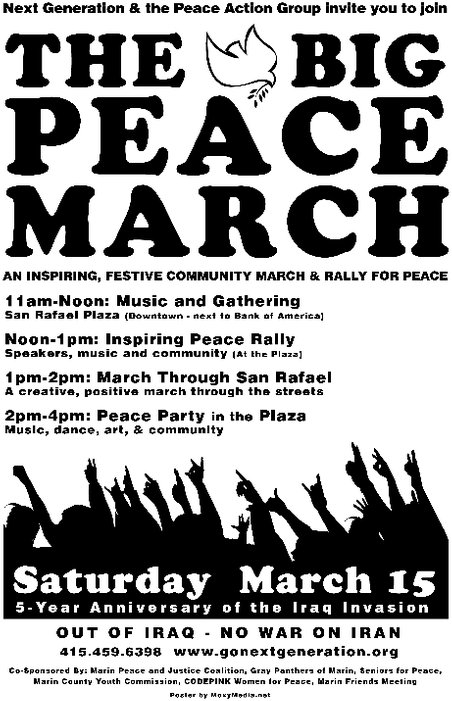 • 11am – Noon: Music and Gathering at San Rafael Plaza (downtown next to Bank of America)
• Noon – 1pm: Inspiring Peace Rally at the Plaza
• 1 – 2pm: March Through the Streets of San Rafael
• 2 – 4pm: Peace Party at the Plaza featuring music, dancing and community

Download the poster and find out more online at:
http://www.gonextgeneration.org

On Saturday, March 15, join Next Generation, the Peace Action Group, and hundreds of people for a positive, hopeful rally, march and party for peace.

As the President calls for increased war spending in Iraq and even pushes for an attack on Iran, our community is coming together to show that the American people stand strongly for peace.

The day will feature:
• Live music during the rally, march, and party
• Inspiring speakers including peace activists, elected officials, students and faith leaders
• A creative march and an engaging community peace party at the Plaza

Join friends and neighbors for an intergenerational, local action, one of hundreds taking place nationwide to mark the 5-year anniversary of the Iraq invasion. Contact us for more information or to get involved!


END_OF_DOCUMENT_TOKEN_TO_BE_REPLACED
Added to the calendar on Wed, Feb 27, 2008 12:23PM
Add Your Comments
Support Independent Media
We are 100% volunteer and depend on your participation to sustain our efforts!