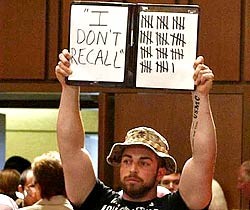 Import event into your personal calendar
Date:
Thursday, February 28, 2008
Time:
7:00 PM - 10:00 PM
Event Type:
Fundraiser
Organizer/Author:
Daniel Young or Dorah Rosen
Email:
dyoung [at] ucsc.edu dorahbee [at] comcast.
Phone:
831.750.7882 or 831.335.1861
Location Details:
Santa Cruz Vets Hall
846 Front St. SC, CA
A growing movement of resistance exists within the military itself towards the US wars of aggression. Troops are refusing (re)deployment, refusing orders and taking measures of resistance as dictated by their consciences. Members of Iraq Veterans Against the War (IVAW) recently re-enacted urban missions in Washington D.C. to show the public what the Iraqi people are subjected to on a daily basis by occupying US forces. Now, to counter the blanket of censorship from the White House and the mainstream media, IVAW will hold a truth forum, The Winter Soldier Hearings, in Maryland next month to give voice to the Iraq and Afghanistan veterans - a voice that has, until now, been suppressed.

To help fly troops to Maryland to testify Veterans for Peace, and other local community groups, will hold a fundraiser. The event will feature IVAW board member Adam Kokesh, who will present a DVD and speak about serving two tours with the Marine Corps in Iraq as well as of his more recent experiences with non-violent civil disobedience in opposition to the war.

Suggested contribution: $10 and up; no one turned away for lack of funds

More on Adam Kokesh- Adam is a decorated combat veteran and devoted opponent of the Iraq and Afghanistan occupations. He is on the Iraq Veteran Against the War board. Adam first got on the national media radar screen when the Marines tried to take away his honorable discharge after he wore his uniform (with insignia removed) during an IVAW demonstration. In a courts-martial, he fought receiving a retroactive other than honorable discharge (which prevents veterans from receiving educational or veterans' benefits) but was busted from an honorable to an honorable under general conditions discharge. This is highly unusual as Adam had received an honorable discharge after fulfilling the active part of his contract- usually actions during the inactive period (non-drilling reserves) don't affect the characterization of discharge.

Adam has a profile on http://www.ivaw.org and at wikipedia. He has been interviewed on Larry King Live, travelled to bases in Europe and the US on an anti-war mission, attended the Alberto Gonzales hearings and kept track of how many times Gonzales couldn't remember something, has been arrested in the Hart Senate Building and at Fort Benning and is a graduate student in political management (whatever that is) at George Washington University in Washington DC. While at GWU, Adam has been involved in several protests against anti-Arab and anti-Islamic movements on campus as well as continuing his fierce commitment to the IVAW goals of immediate troop withdrawal from Iraq, reparations for the Iraqi people, full benefits (including mental health care) for returning troops.
Adam is a member of the Washington DC IVAW chapter and one of the organizers for Winter Soldier: Iraq & Afghanistan, focusing on mental health care for troops and veterans.

Note: The photo below shows Adam keeping track of how many times Alberto Gonzales said "I don't recall" during his testimony to the Congress about the ridiculous actions of the Bush Administration.
END_OF_DOCUMENT_TOKEN_TO_BE_REPLACED
Added to the calendar on Mon, Feb 25, 2008 3:47PM
Add Your Comments
Latest Comments
Listed below are the latest comments about this post.
These comments are submitted anonymously by website visitors.
TITLE
AUTHOR
DATE
American Casualties of Iraq and Afghanistan Web Counter for your Blog, Facebook, Website
Michael Manoochehri
Support Independent Media
We are 100% volunteer and depend on your participation to sustain our efforts!