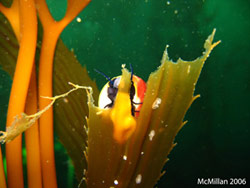 The kelp forests of the Central Coast of California and along the Monterey Peninsula in particular are significant factors contributing to the overall richness and diversity of marine life in the associated waters. As a primary producer Giant Kelp is part of the foundation of many food systems. As a climax species it defines a habitat which supports essential life functions for vertebrates and invertebrates alike.

Our speaker this month, Selena McMillan, will speak about the relationship between the primary producer, Giant Kelp, and one of its consumers, the Brown Turban Snail. While much has been said about abalone and urchin grazing on Giant Kelp, Selena's research focuses on the most abundant kelp forest herbivore in Central California. Her project is unique in that it represents first study of grazing on the entire Giant Kelp sporophyte that has been done in Central California.

Selena is a Masters Degree Candidate at Moss Landing Marine Labs. Her advisor, Dr. Michael Graham, spoke to the Monterey Chapter last year. As a marine ecologist Selena has a particular interest in the trophic relationship between primary producers and their consumers and the effects this relationship has on the overall dynamics of the kelp forest community.

Please join us and learn more about the Giant Kelp Forest and what goes on in that very important coastal habitat.


Photo © Selena McMillan
END_OF_DOCUMENT_TOKEN_TO_BE_REPLACED
Added to the calendar on Fri, Feb 22, 2008 10:36PM
Add Your Comments
Support Independent Media
We are 100% volunteer and depend on your participation to sustain our efforts!