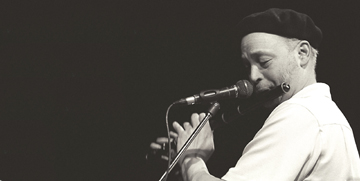 Multi-instrumentalist, composer and arranger John Calloway's Flute Odyssey takes us down different paths of flute playing that represent different cultures, techniques, and philosophies. Five accomplished flute players provide different perspectives on an instrument that has been represented in most cultures and peoples from antiquity to today - not your traditional flute ensemble evening by any stretch of the imagination!

John Calloway is a multi-instrumentalist, composer and arranger who has performed with many renowned jazz and Latin music artists throughout the United States, Europe and Latin America, among them: Israel "Cachao" Lopez, Max Roach, Omar Sosa and Dizzy Gillespie. In the San Francisco Bay Area, John has built a solid foundation, with credits as a performer/arranger with Pete Escovedo, Jesus Diaz, John Santos, Quique Cruz, Rebeca Mauleon, and Wayne Wallace. He has recently traveled to South America with the Chilean jazz group Quijerema, and with Teatro Arcoiris for the critically acclaimed theatre piece "Poeta Pan," based on the life and poetry of Pablo Neruda.

His recording credits as a performer and composer include his debut CD Diaspora, his recently released The Code (Bombo music) and collaborations with John Santos, Jesus Diaz and Omar Sosa. Included in his recording and writing credits are the Grammy nominations given to SF Bay (2003) with the Machete Ensemble, and Ritmo y Candela (1996) and Ritmo y Candela II (1998), produced by Greg Landau and featuring Cuban percussionists Changuito, Patato, and Orestes Vilato.

As an educator, Calloway currently teaches Afro-Cuban music and Latin American music courses at San Francisco State University and at the Jazz School in Berkeley, CA. He is also a clinician at the Stanford Jazz Workshop and at JazzCampWest, based in Oakland, CA. He frequently travels to Cuba as program coordinator for PlazaCuba, an arts company that offers courses in conjunction with the National School of the Arts in Havana, Cuba.

Calloway holds a B.A. in music from the City University of New York, an M.A. degree in Music Education from San Francisco State University, and is currently working on his doctorate in international and multi-cultural education at the University of San Francisco. His passion outside of music is to advocate for quality arts education for all children in the public schools, and is a firm believer in social justice for the marginalized students he has been teaching for many years.
END_OF_DOCUMENT_TOKEN_TO_BE_REPLACED
Added to the calendar on Thu, Feb 21, 2008 5:25PM
Add Your Comments
Support Independent Media
We are 100% volunteer and depend on your participation to sustain our efforts!