June in a Box Opening Night 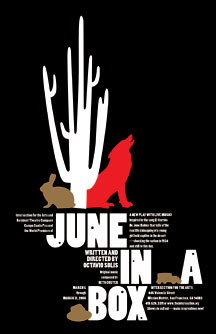 Intersection for the Arts is located in San Francisco's Mission District, on Valencia Street, between 15th and 16th Streets.

June In A Box

March 6-31, 2008
Thursday-Sundays at 8pm | $10-$25/sliding scale
(Thursdays are Pay What You Can)
Make Reservations at: http://www.theintersection.org/reservations/reservations.php


Intersection's Resident Theatre Company Campo Santo present a new play with live music inspired by the song El Corrido de June Robles that tells the tale of the real life kidnapping of 9 year old June Robles in the 1930's in Arizona that shocked the nation. Solis, who previously created The Ballad of Pancho and Lucy (2005) with Beth Custer and Campo Santo, unearths this mystery today told through more than 25 characters in memory, song, past and present.

Campo Santo has "consistently produced by far some of the most exciting and risk-taking productions around...it's fair to say their output has been nothing short of awesome." - Robert Avila, SF Bay Guardian

To make reservations for performances, go to http://www.theintersection.org/reservations/reservations.php or call our box office at (415) 626-3311.

END_OF_DOCUMENT_TOKEN_TO_BE_REPLACED
Added to the calendar on Thu, Feb 21, 2008 4:11PM
Add Your Comments
Support Independent Media
We are 100% volunteer and depend on your participation to sustain our efforts!