A Presidents Day to Remember: Photos from San Francisco

by Robert B. Livingston (gruaudemais [at] yahoo.com)
In a country in turmoil because of its involvement in a war built on lies and its government running roughshod over the rights laid down by the U.S. Constitution-- San Franciscans showed yesterday that that theirs is "The City that Knows How" to celebrate the third Monday in February: By calling on Congress to Impeach! 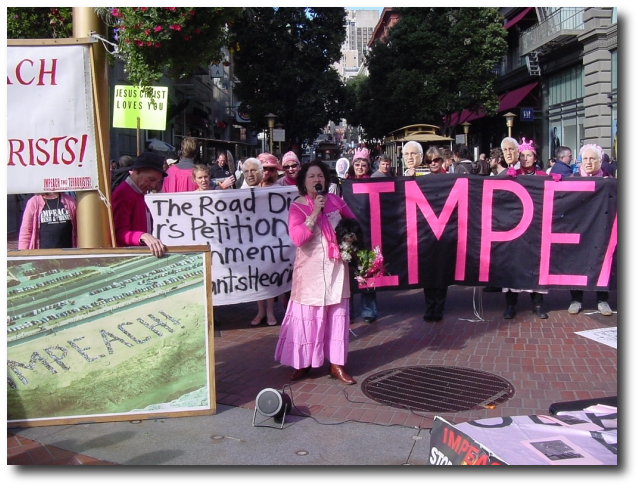 
For most Americans, the third Monday in February is observed as a chance to enjoy a three-day weekend. For historians, the day might officially be called Washington's birthday in honor of the first president of the Revolutionary Republic: George Washington the great general that led the colonies to independence. But Washington was born February 22. Go figure.

Yesterday in San Francisco, many people gathered at the historic cable car turnaround at the corner of Powell and Market Streets to demonstrate that the day meant more to them than a chance to skip work or to take advantage of the numerous "Presidents Day" shopping sales.

For them, the day was a chance for them to publicly proclaim their disapproval of congressional representatives who have taken "impeachment off the table" and are allowing the George W. Bush administration to wind down its eight criminal years of office without ever being held to account.

Attending the demonstration were some illustrious San Francisco Bay Area peace activists, including Cindy Sheehan, the mother whose loss of her son (killed in Iraq) propelled her to challenge first Bush who lied our country into war, and now Nancy Pelosi who failed to stand up to him.

Cynthia McKinney (a favorite for the Green Party's nomination to run for president), CodePink's Medea Benjamin, and Dennis Bernstein of KPFA were not present as expected-- but others turned out-- including Carol Brouillet (the famed 9/11 truth activist), Shirley Golub (a Democrat challenging Pelosi in the Democratic Party primary election), CodePink ladies and their gentlemen supporters and also many Green Party activists... and others too numerous for me to keep up with. (I hope people reading this will contribute helpful references in the comments section below).

Here are some of my snapshots of the day's event.

Many locals and tourists from all lands who were waiting for the famous Powell Street cable car, or just passing by amidst their busy day of shopping expressed their warm support and encouragement to the demonstrators, as did local entrepreneurs who work in the area.

On my way home in the evening, I encountered a nondescript woman on the bus who asked me what the orange button I was wearing on my coat said.

"Impeach The war Criminals!" I replied.

Suddenly, with her heavy backpack slung behind her, she exited through the front door because the bus had reached her stop. Calling out behind her she yelled: "Yeah! They stole two elections!"

After a moment, the driver pulled out to continue his route, and I couldn't help exclaiming aloud: "The whole world knows it! But we won't read it in the newspapers!"

The strangers sitting around me nodded in agreement.

Carol Brouillet needs signatures because she is considering a congressional run against Anna Eshoo
http://www.communitycurrency.org/index.html

The City That Knows How
http://www.crwflags.com/FOTW/FLAGS/us-ca-sf.html

§A local family wants Cheney impeached.
by Robert B. Livingston 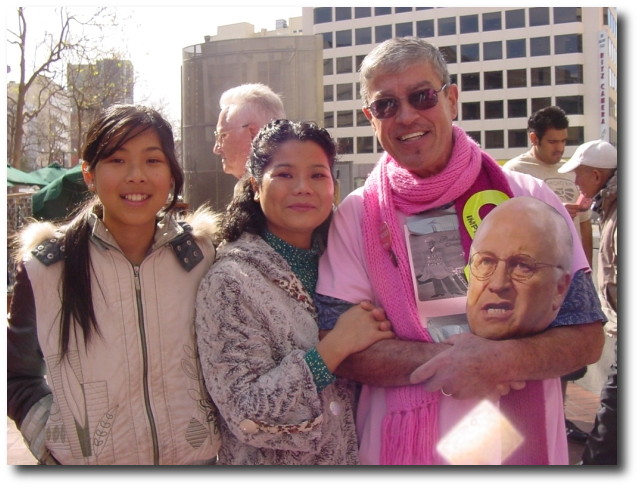 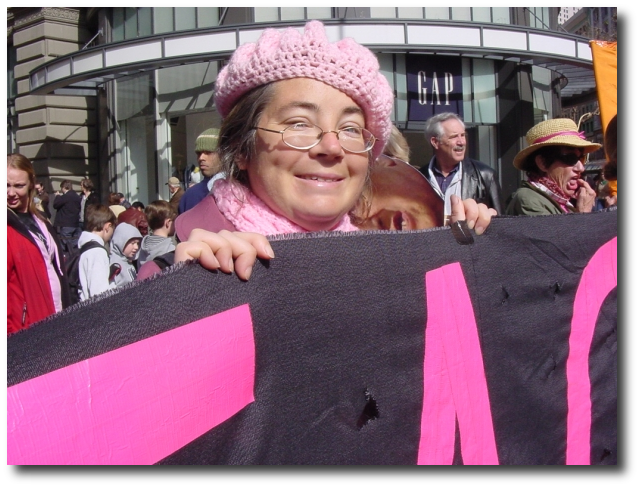 This is Jody's blog: 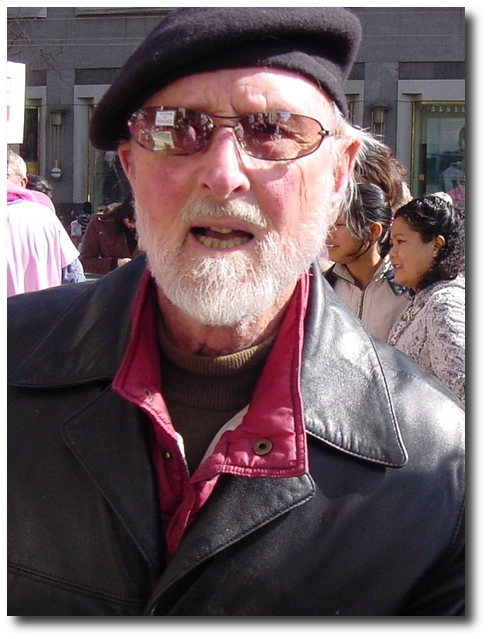 Selwyn gave me my orange button that says "Impeach the War Criminals!" Like many of the ribbons demonstrators were wearing, orange is the color of the jumpsuits illegally detained and tortured prisoners at Guantanamo are wearing; the color symbolizes opposition to torture.
§Cindy Sheehan wants impeachment.
by Robert B. Livingston 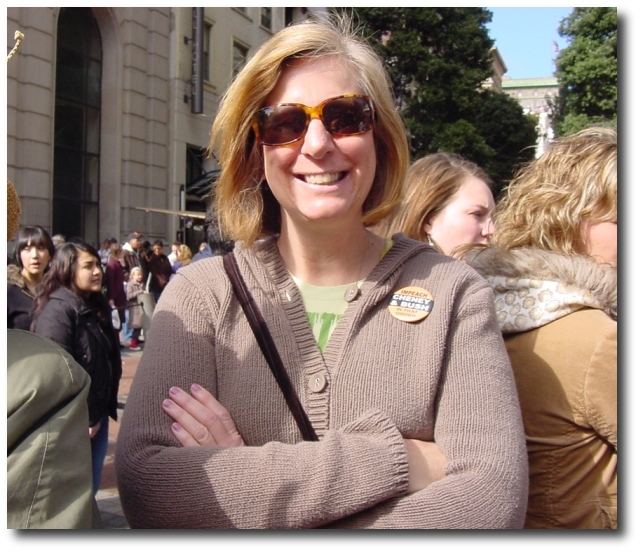 Cindy is running for congress against Nancy Pelosi. In 2002, Pelosi was informed about waterboarding-- a cruel torture that is outlawed by the international law. Pelosi has been silent about it.
Many experts believe that torturing prisoners achieves nothing except to reveal the brutality of the captors. Confessions achieved under torture are suspect-- prisoners will tell what they expect their captors want to hear. Torturing prisoners also invites retaliation. 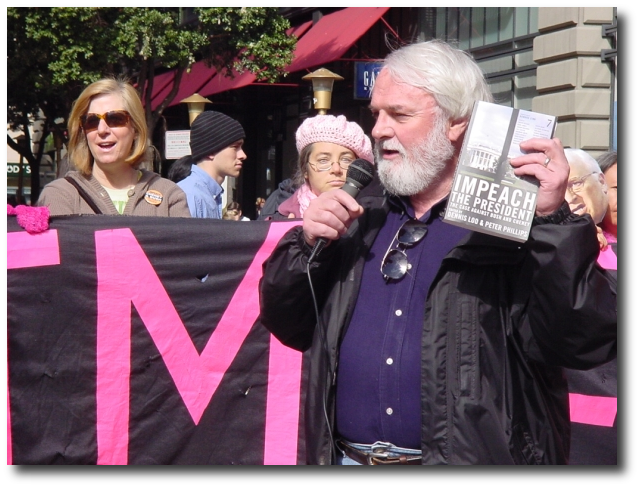 Dr. Peter M. Phillips is a professor at the Department of Sociology at Sonoma State University. He is also the Director of Project Censored, and the author of one of many books which have been published about impeachment since Bush became president.

Impeach the President: the Case Against Bush and Cheney
http://www.projectcensored.org/impeach.htm
§Cindy Sheehan gives a speech.
by Robert B. Livingston 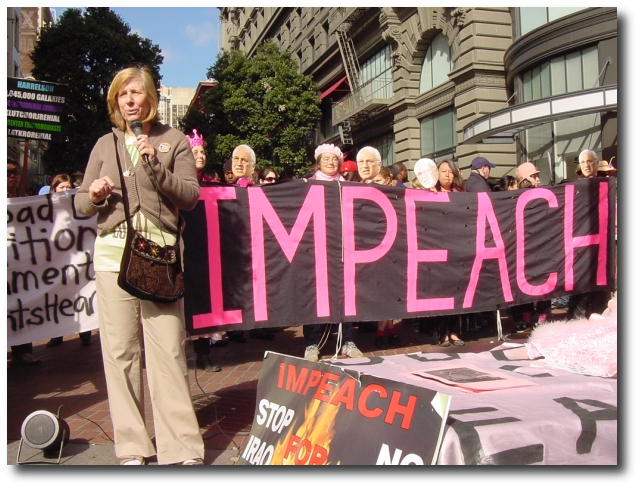 Cindy explains to the crowd that the Consitution must be defended, and that she and many others are running for congress to do just that.

"The Congress Shall Impeach." Article II Section 4:
"The President, Vice President and all civil Officers of the United States, shall be removed from Office on Impeachment for, and Conviction of, Treason, Bribery, or other high Crimes and Misdemeanors."
http://tinyurl.com/26lr4v

Cindy Sheehan for Congress:
http://www.cindyforcongress.org/
§CodePink Chorus for impeachment.
by Robert B. Livingston 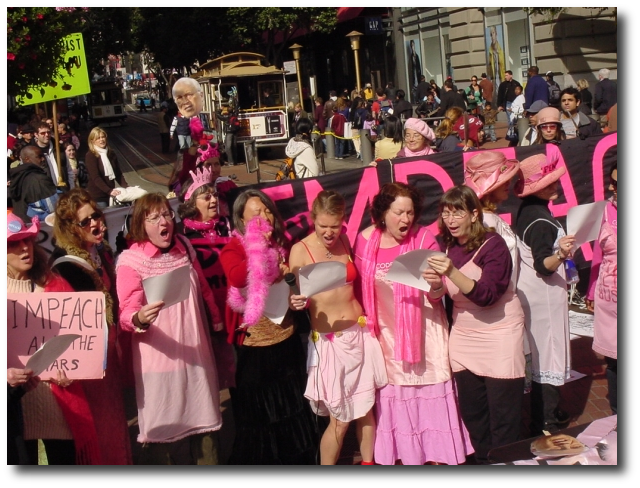 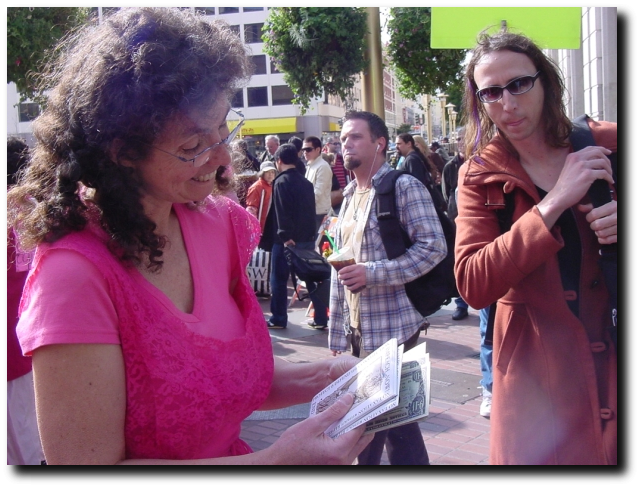 Carol Brouillet is one of the most famous and highly respected leaders among millions of Americans who distrust the official explanation for what happened on 9/11. She has a weekly radio program and is gathering signatures to challenge Anna Eshoo in her own congressional district. She knows her long-shot campaign would be costly, also emotionally and physically draining, -- but she wants to do it anyway because she wants to show others the importance that We the People take command when our current representatives are failing us so miserably. She is a real patriot. 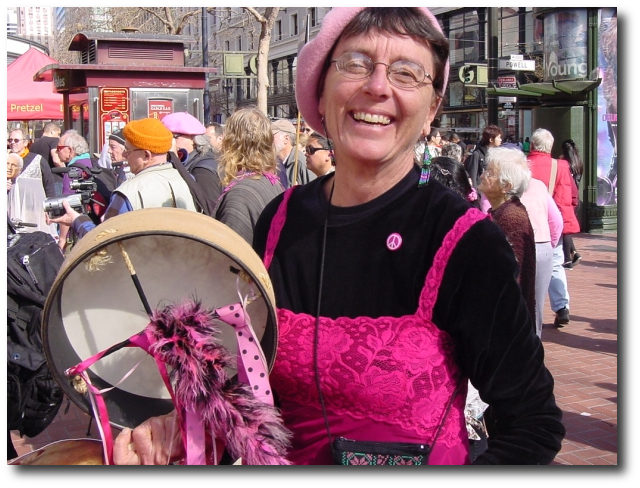 Toby was one of the CodePink ladies who camped out at Nancy Pelosi's Pacific Heights residence for the sake of urging her to impeach Bush and Cheney.
http://www.indybay.org/newsitems/2007/03/21/18381018.php
§A man registers to vote.
by Robert B. Livingston 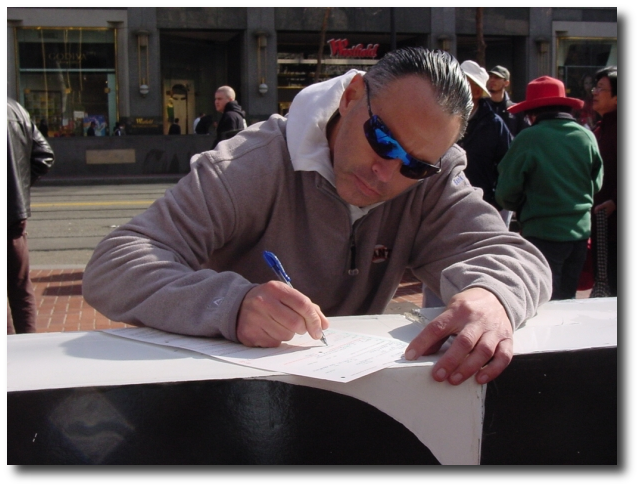 On top of a huge block display that reads "IMPEACH!" a man fills out a voter registration form.

My guess, he wants to vote for Cindy Sheehan or a candidate like her who wants impeachment!
§This man wants Cheney and Bush impeached.
by Robert B. Livingston He also wants Cindy Sheehan for Congress!
§Portrait of a woman who wants impeachment.
by Robert B. Livingston 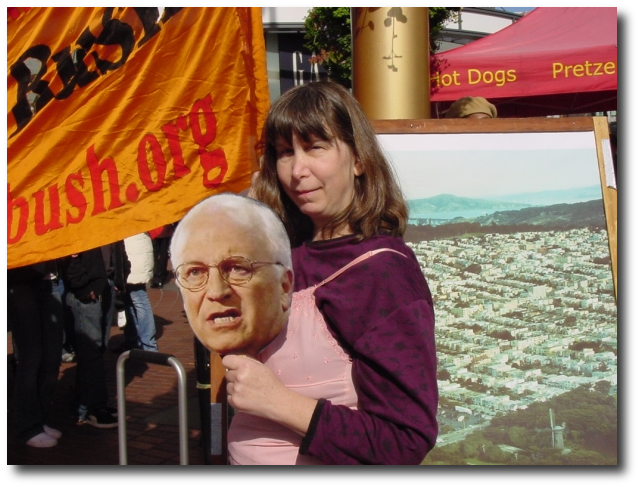 This member of CodePink holds a banner in one hand, and a mask of the "Liar-In-Chief" Vice President Dick Cheney in the other. She stands in front of an enlarged photo of one of Brad Newsham's Beach Impeach demonstrations in the Bay Area-- one of four at which thousands upon thousands of people gathered urging Congress to impeach! A fifth action is planned. To learn about it go to:
http://beachimpeach.com/ 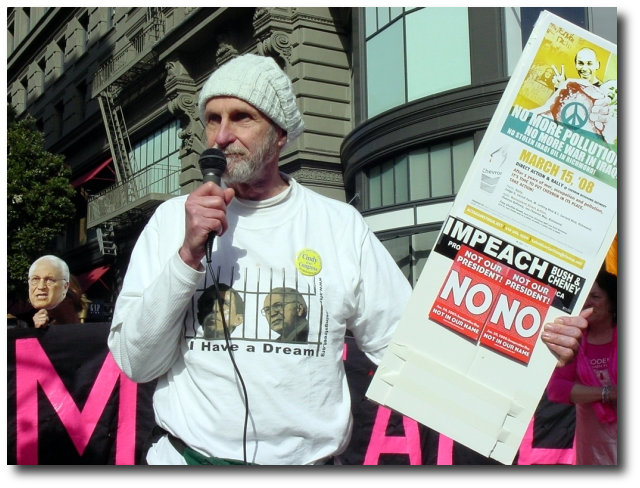 Jim Dorenkott describes a rally planned for Saturday March 15 against Chevron, a local polluter, which has been grossly profitting from the war in Iraq.
Details:
http://www.indybay.org/newsitems/2008/01/25/18474707.php
§June Brashares wants impeachment.
by Robert B. Livingston 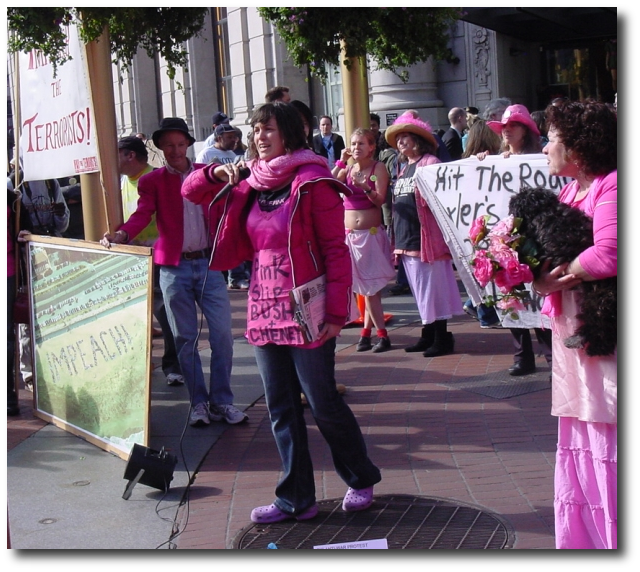 June is a member of CodePink and also a strong supporter of Cindy Sheehan's bid for Congress. Nancy is a member of CodePink. Here she looks thin. No doubt, she is fasting with her "sister" Leslie Angeline who wants Congressman John Conyers who heads the House Judicial Committee to initiate impeachment hearings against Dick Cheney.

During the event, the activists got a long0-distance call from Leslie Angeline who is Washington, D.C.:
http://impeachforpeace.org/impeach_bush_blog/
§This young man agrees: Impeach!
by Robert B. Livingston 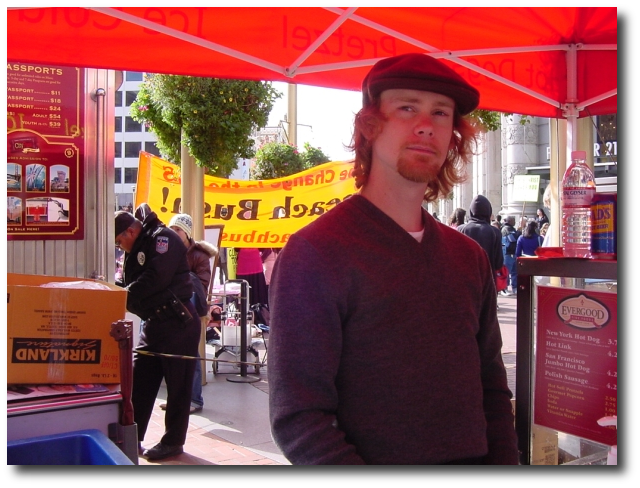 Andy was working at the pretzel and hot dog stand at the famous cable car turnaround. I asked him what he thought about the demonstration nearby. He proudly told me that he didn't think impeachment was likely to happen. I asked him if he wanted it to happen. He said "Yes. Absolutely!" I asked him if I could quote him, and he said, "Yes."
§A CodePink supporter wants impeachment.
by Robert B. Livingston 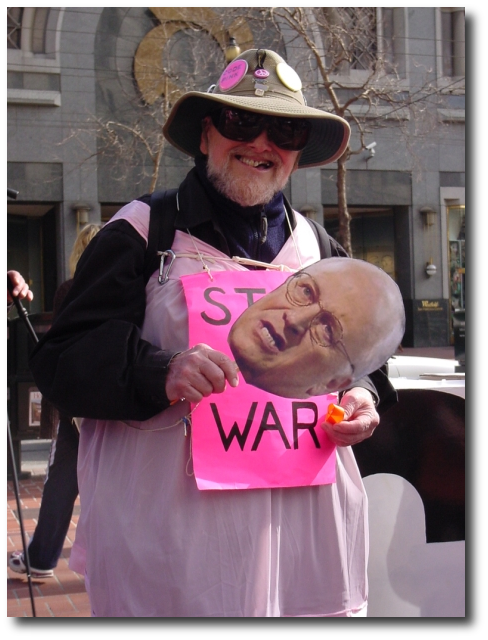 This patriotic gentleman who is retired from the federal government routinely joins CodePink's famous antiwar demonstrations at the Golden Gate Bridge.
http://www.indybay.org/newsitems/2007/11/12/18460300.php
§Others wanting impeachent.
by Robert B. Livingston 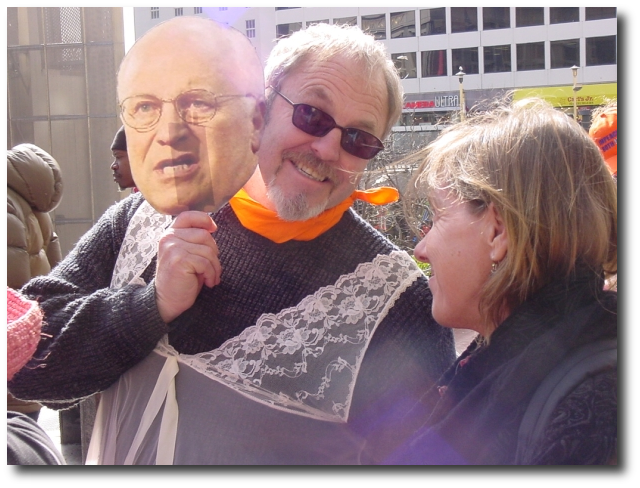 To show their solidarity with CodePink, many men wore slips and pink! Although the demonstration was festive and often light-hearted, the demonstrators were earnest. Many got into heated discussions about the serious state of the nation.
§Impeach them all!
by Robert B. Livingston 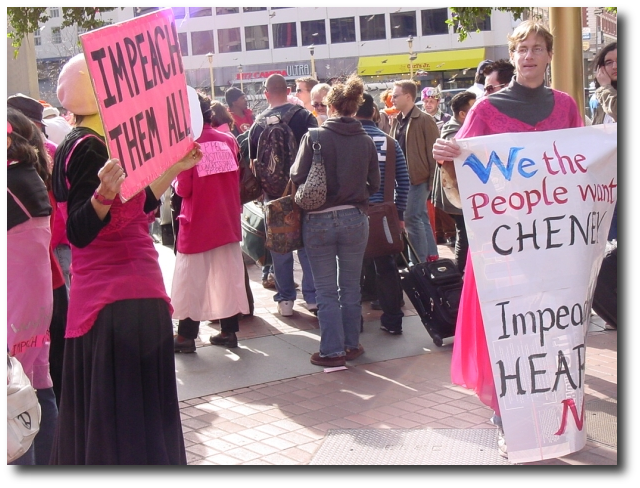 Most demonstators in San Francisco believe Cheney should be impeached first, but it is clear they also want Bush impeached. Ultimately, they hope that all the criminals in the government be exposed and removed from office.
§Short 15 second video clip of the CodePink Chorus
by Robert B. Livingston (gruaudemais [at] yahoo.com)
Copy the code below to embed this movie into a web page:
Download Video (343.7KB) | Embed Video
Here is a short 15 second video clip that I can't resist including (of a cute dog rapt by a chorus of "We defend the Constitution" sung by local members of CodePink).