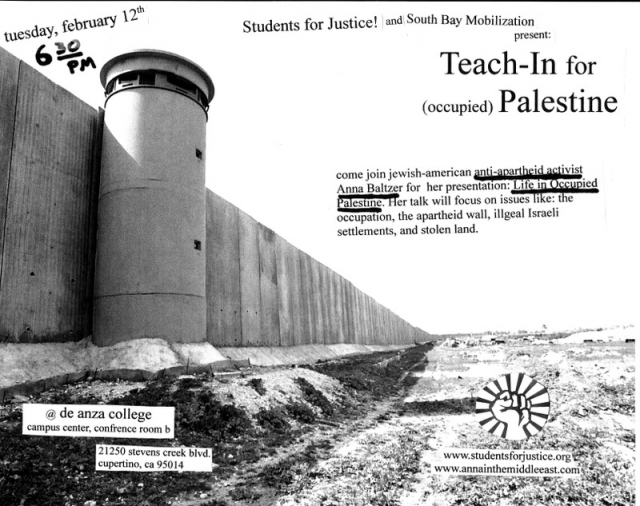 Our campuses are overflowing with literature and speakers about the
Middle
East conflict. But all too often, people and groups spend their time
fighting for sole ownership of history and suffering or choose to
stand up
for their "side" by attacking 'the other."


We've heard endless lectures and seen editorials from politicians,
professors, advocates and others. We know the frustrations and
critiques,
but what do average Israelis and average Palestinians really think? Do
they want to end the conflict? Do they share common ground?

Leading OneVoice youth activists Palestinian Wafa Nazzal Nazzal and
Israeli Noga Ron will be speaking with YOU, their U.S. counterparts,
throughout Northern California during the week of February 8 to 15th,
galvanizing support for their work in the Middle East and giving
students
the opportunity to be part of the solution, rather than part of the
problem.

Wafa and Noga will use their personal experiences to shed light on
several
key questions: Is the Palestinian-Israeli conflict intractable? Can
mainstream Israelis and Palestinians actually agree on what they want
the
future of their region to look like? What is the current pulse of the
young generation and what are they doing to make a difference?

The OneVoice Movement is a mass grassroots movement in the Middle East
that empowers Palestinians and Israelis to seize back the agenda for
conflict resolution.

For more information, please go to
http://www.OneMillionVoices.org.
Add a Comment
Support Independent Media
We are 100% volunteer and depend on your participation to sustain our efforts!