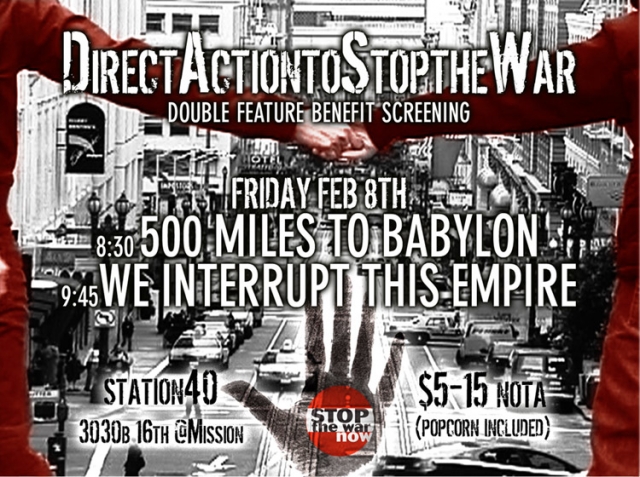 $5-15 (no one turned away for lack of funds)
Popcorn included!

A fundraiser for Direct Action to Stop the War (http://www.actagainstwar.net), a decentralized, unaffiliated network of Bay Area affinity groups and activists, working together to organize a day of coordinated, independent, and nonviolent direct actions against the government and war profiteers in San Francisco on March 19, 2008 as well as actions leading up to that date.

500 Miles to Babylon is a one-hour documentary shot in multiple cities in Iraq in 2003-4. Narrated by the filmmaker, it addresses the current war not simply as a conflict over petroleum profits or a scheme to fill a company's coffers, but as part of a larger American imperial project. Through impromptu interviews, glimpses of daily life, still photographs, and footage of car-bombs, demonstrations, night-time graffiti artists, Sufi rituals, and the celebrations following Saddam's capture, 500 Miles To Babylon charts the early days of the U.S. occupation as it blundered its way and Iraqi society began to collapse.

It is a film not about soldiers, not about governments, but about Iraqi civilians and a handful of independent journalists in a country being turned into hell. A cinema verite narrative of daily life, disintegration, and the humor that ordinary people adapt when living in a warzone.

The story ends with rare footage from inside besieged Fallujah, where the filmmaker went in April 2004 with a group of volunteers to deliver medical aid to the town's inhabitants and subsequently reported to the world about the conditions of civilians during the fighting.

With a soundtrack of Iraqi Choubi songs compiled by Sublime Frequencies.

We Interrupt This Empire... (2003, DV, 52:17) is a collaborative work by many of the Bay Area's independent video activists which documents the direct actions that shut down the financial district of San Francisco in the weeks following the United States' invasion of Iraq.

With the audio backdrop including live broadcasts of Enemy Combatant Radio from the San Francisco Bay Area Independent Media Center, the documentary takes a look at the diverse show of resistance from the streets of San Francisco as well as providing a critique of the corporate media coverage of the war and exploring such issues as the Military Industrial Complex, attack on civil liberties, and the United States' current imperialist drive.
END_OF_DOCUMENT_TOKEN_TO_BE_REPLACED
Added to the calendar on Tue, Feb 5, 2008 10:36PM
Add Your Comments
Support Independent Media
We are 100% volunteer and depend on your participation to sustain our efforts!