Add an Event
Newswire
Calendar
Features
Home
Donate
From the Open-Publishing Calendar
From the Open-Publishing Newswire
Indybay Feature
Publish to Newswire
Add an Event
Related Categories: International | Animal Liberation
Sea Shepherd: Australian Government too timid on Whaling
by Takver - Sydney Indymedia
Sunday Feb 3rd, 2008 8:23 AM
The Sea Shepherd ship Steve Irwin arrived in Melbourne early Saturday afternoon to an enthusiastic crowd of about 150 people to greet the ship. Captain Paul Watson vowed to refuel and be ready to sail back to the Southern Ocean in 7 to 10 days time. The Whalers are expected to continue whaling for another 2 months. 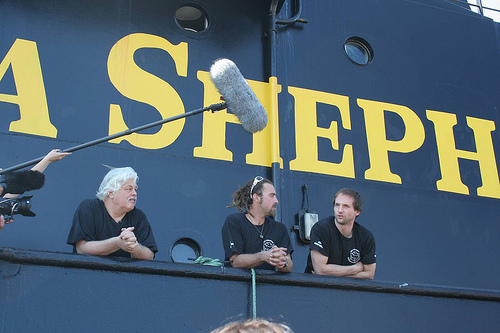 The problem for Captain Watson and the Steve Irwin will be locating the fleet in the millions of miles of ocean.

The Steve Irwin was tracked for two weeks by the Fukuyoshi Maru No. 68, which only left them at the 200 mile Australian territorial limit. It is believed this ship has Japanese coast guard officers on board, and the ship is used to communicate the location of the Steve Irwin to the whaling fleet.

Paul Watson told reporters he is keen to go back out and disrupt whaling again this season. Next season he has indicated Sea Shepherd may use two ships to track and disrupt the whaling fleet in a tag team effort. He also accused the Australian Government of hypocrisy and timidity in challenging Japanese whaling, citing the rigid enforcement of fisheries poaching by Uruguay flagged vessels while the Japanese whaling was allowed to continue unmolested, the essential difference being the respective economic power of the countries involved.

Australian Federal Police will be interviewing Benjamin Potts and Giles Lane on their boarding of the Yushin Maru No 2 to give a letter to the Captain of the ship. They were held hostage for 3 days and returned through the intermediary efforts of the Australian Patrol Ship Oceanic Viking.

The Japanese Government would like the two men charged. But the Federal Police at this stage are only undertaking "preliminary inquiries into the events that occurred in the Southern Ocean in accordance with Australian legislations and Australia's obligation under international law," an AFP spokeswoman said. Paul Watson would like nothing more than there to be a show trial, especially as under Australian law whaling in the Whale Sanctuary has been found to be illegal by the Federal Court earlier in January.

Benjamin Potts and Giles Lane, who both volunteered to board the Japanese ship at the direction of Captain Watson, are keen to continue with the Steve Irwin when it returns to the Southern Ocean to harass the whaling fleet.

On Sunday evening the Esperanza sailed into Hobart to cheering crowds. Greenpeace have said this ship will not be returning to the whaling grounds this season. Greenpeace believe more focus needs to be applied within Japan for internal pressure on the Japanese Government to stop whaling.

The Australian Patrol Ship Oceanic Viking is believed to be following the Whaling fleet documenting its activities in preperation for possible legal challenges under various international laws and treaties. Paul Watson criticised this approach likening it to filming a bank robbery in progress rather than catching and prosecuting the offenders.

The whaling issue in Japan is now receiving substantial media coverage showing whaling in a negative light with the Prime Minister appealing for calm. This has been a breakthrough of sorts. 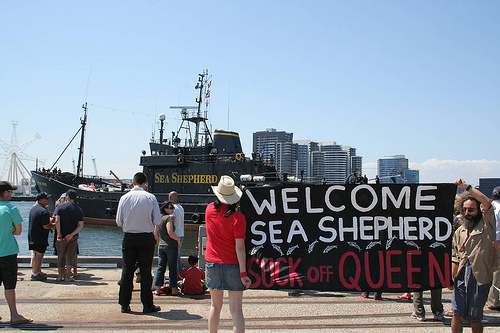 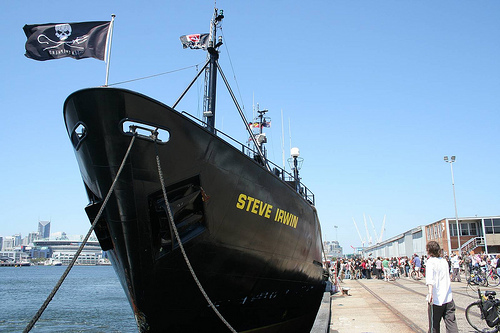 Paul Watson has referred to the fact that it took a pirate, Henry Morgan, to bring to an end the heyday of the pirates of the Caribbean. And so a modern day conservation pirate is attempting to end pirate whaling. Japanese whaling is done in the name of scientific research but in reality is thinly disguised commercial whaling.
Add Your Comments
LATEST COMMENTS ABOUT THIS ARTICLE
Listed below are the latest comments about this post.
These comments are submitted anonymously by website visitors.