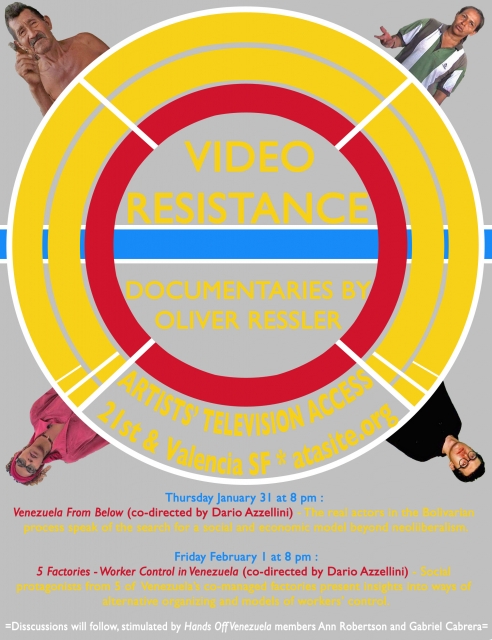 Karen Bennett, Clif Ross, and Christene DeJong from the Berkeley Art Museum will be on hand to discuss the presentation of Oliver Ressler's work there in 2006.
Plus Ann Robertson and Gabriel Cabrera of Hands Off Venezuela

Oliver Ressler is an artist doing projects on various socio-political themes. Since 1994 he has been concerned with theme specific exhibitions, projects in public space, and videos on issues of racism, migration, genetic engineering, economics, forms of resistance and social alternatives. The films "Venezuela from Below" and "5 Factories–Worker Control in Venezuela" made with political analyst Dario Azzellini, will be screened on consecutive evenings, with his most recent video "The Fittest Survive", accompanying "Venezuela from Below" on January 31.

In their second film regarding political and social change in Venezuela, after "Venezuela from Below" (67 min., 2004), Azzellini and Ressler focus on the industrial sector in "5 Factories–Worker Control in Venezuela". The protagonists portrayed at the five production locations present insights into ways of alternative organizing and models of workers' control. Mechanisms and difficulties of self-organization are explained as well as the production processes. The portrayal of machine processes could be seen as a metaphor for the dream machine of the "Bolivarian process", and the hopes and desires it inspires among the workers. The situation in the five factories varies, but they share the common search for better models of production and life. This not only means concrete improvements for the workers.

For more information on Oliver Ressler's work visit http://www.ressler.at/
END_OF_DOCUMENT_TOKEN_TO_BE_REPLACED
Added to the calendar on Mon, Jan 28, 2008 10:13AM
§5 Factories
by Andrew Wilson 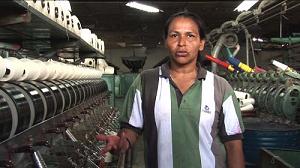 video still
END_OF_DOCUMENT_TOKEN_TO_BE_REPLACED
Add Your Comments
Support Independent Media
We are 100% volunteer and depend on your participation to sustain our efforts!