Add an Event
Newswire
Calendar
Features
Home
Donate
From the Open-Publishing Calendar
From the Open-Publishing Newswire
Indybay Feature
Publish to Newswire
Add an Event
Related Categories: San Francisco | Government & Elections
Impeachment Letters Delivered to Pelosi
by Johnnie Burrell & Ben Terrall
Wednesday Jan 23rd, 2008 9:38 AM
On January 14, Cindy Sheehan and her supporters held a rally at the San Francisco Federal Building where they presented an aide to Nancy Pelosi with more than 8,000 signed letters from U.S. voters urging impeachment of Cheney and Bush. 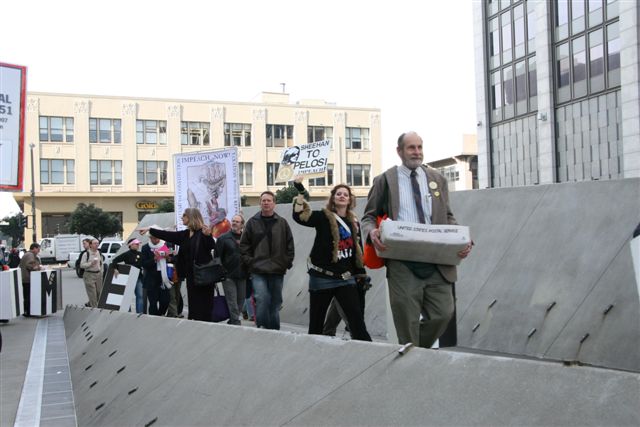 Though it seems to have made little impression on the Democratic Party’s leadership, grassroots pressure for impeachment proceedings against Vice President Cheney and President Bush continues to grow in the U.S.

Cindy Sheehan, whose decision to run as an independent against Pelosi in the next election was precipitated by the Democratic Congresswoman’s refusal to support impeachment, spoke to the assembled protestors. Sheehan, whose son Casey was killed in Iraq, said, "I believe that when George Bush commuted Scooter Libby’s sentence for a crime that he was complicit in, he committed treason. A president can commute sentences, a president can pardon people, but not when they are involved in the crime."

The former Georgia congresswoman Cynthia McKinney, who is running for the Green Party’s Presidential nomination, appeared at the San Francisco demonstration and spoke in support of Sheehan’s campaign. McKinney said, “People who betray the values of their constituents do not deserve to be part of the government. The government, actually, is us; it’s supposed to be us.

McKinney added, “We have an opportunity to learn from countries where people power has stepped up and through the power of the ballot they have changed things, like in Venezuela, like in Bolivia, like in Chile, like in Argentina, like in Ecuador. They have changed things. People power… and so our campaign is called the power to the people committee, and we are asking people of every political persuasion to join with us in the creation of a new people power movement that can change our country, that can change the policies and the values of our country, and take our government back.”

Wexler said, “In the history of our nation, we have never encountered a moment where the actions of a President or a Vice President have more strongly demanded the use of the power of impeachment.”

Wexler, a member of the Judiciary Committee, noted that though “a growing chorus of American citizens are calling for this Administration and this Vice President to be held accountable … the response from Congress thus far has been silence and denial.”

Wexler’s office set up a website for U.S. voters to endorse the Florida congressman’s call for hearings. As of January 16, more than 189,000 people had signed on to the site’s petition.

Bay Area-based impeachment activist Brad Newsham, organizer of multiple “Beach Impeach” actions, told me, “Wexler is the Man of the Moment in the impeachment movement. Shortly after Wexler appeared on the Randi Rhodes show Thursday morning, his “Impeach Cheney” petition <a href="//wexler.house.gov/”>(http://wexler.house.gov/) cracked 200,000 signatures and has added nearly 10,000 since then.” Newsham emphasized, “Pro impeachment phone calls and emails have been pouring in to the offices of members of Congress, and Wexler has asked that we keep up the pressure (especially on John Conyers).”

At a January 17 press conference, Speaker Pelosi responded to a question about her reluctance to hold Cheney’s “feet to the fire” by insisting she was sticking to her long-stated view that “an impeachment of the Vice President or the President of the United States would be divisive in our country.” She added, “the unity of our country is something that we all value, and that would not be in furtherance of promoting that unity.”

I contacted Cindy Sheehan for a response to Pelosi’s comments. Ms. Sheehan told me, “What George Bush and Dick Cheney have done with the cooperation of Congress is divide the country -- this country is the most polarized it's ever been in my lifetime.” Ms. Sheehan said Congress needs to be focus on “justice and a commitment to rule of law and the constitution. About impeachment, she said, “I don't know if it would bring unity to our country, but it would show our leaders are committed to the principles of the Founding Fathers.”

Sheehan speculated that “one of reasons for not digging too deep” is the complicity of leading Democrats with much that is impeachable: “Like in 2002, Pelosi was briefed on torture.” Further, “There's been a consolidation of power in one branch of government, and the Democrats know that, [but] think they can win and take advantage of that power when it becomes theirs.”

Cindy Sheehan said in Spring 2007 that if Pelosi agreed to support impeachment by July 23, she wouldn’t continue to run against the veteran Democrat. But now the maverick campaign is underway and Sheehan is meeting with housing rights, immigration, environmental justice and other activists throughout San Francisco, and her campaign is pulling in veteran Green Party and other progressive activist volunteers. Sheehan told me, “if [Pelosi] came out tomorrow to let articles of impeachment go forward,” the campaign would continue. “We think the war and accountability are major issues, but we want and advocate for single payer universal health care, good and free or cheap education … and want the environment cleaned up.” Sheehan especially stressed the need to push for environmental and economic justice in Hunter’s Point, a traditionally African-American San Francisco neighborhood where a decommissioned naval shipyard doubles as a superfund cleanup site. The area now faces accelerating gentrification and construction of a new 49ers stadium on toxic land.

Sheehan noted these domestic concerns won’t be addressed “when our government is spending twelve million dollars an hour in Iraq … our futures are being sucked dry.” She concluded, “We need to solve the problem of militarism, especially the war in Iraq and Afghanistan, to solve pressing social issues.”
http://www.cindyforcongress.org/
§Impeachment Letters for Speaker Pelosi
by Johnnie Burrell & Ben Terrall Wednesday Jan 23rd, 2008 9:38 AM 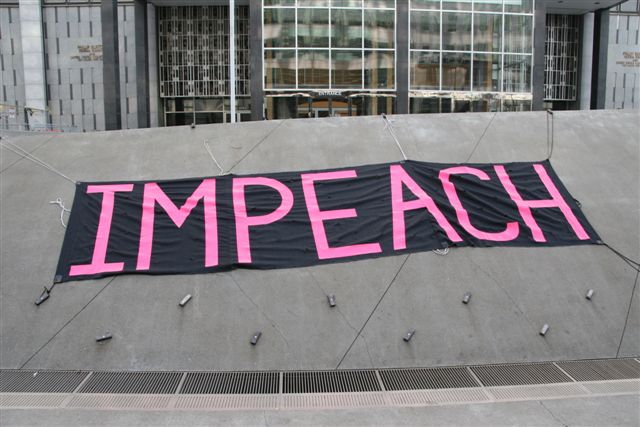 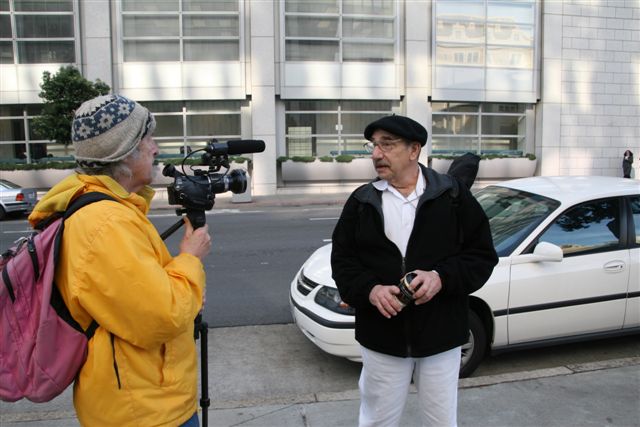 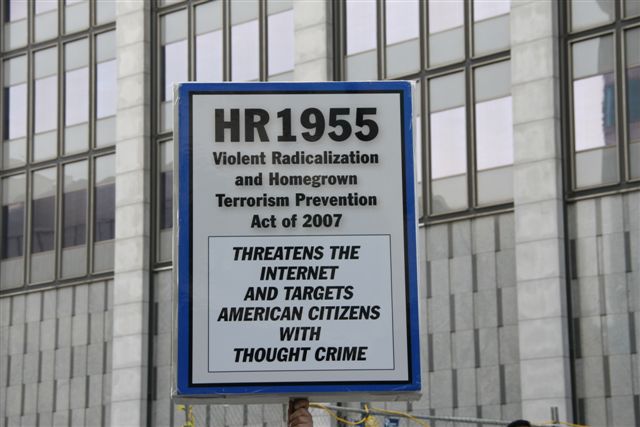 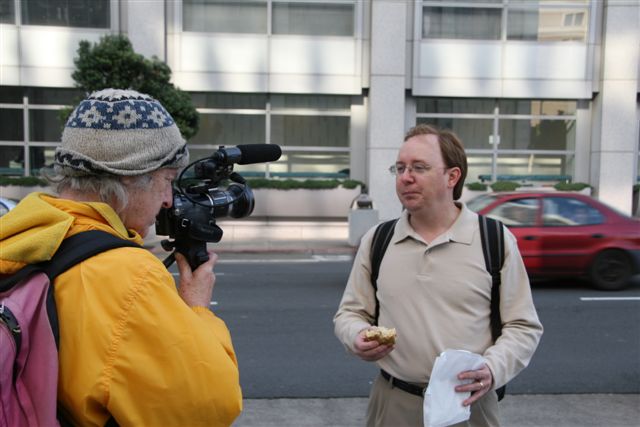 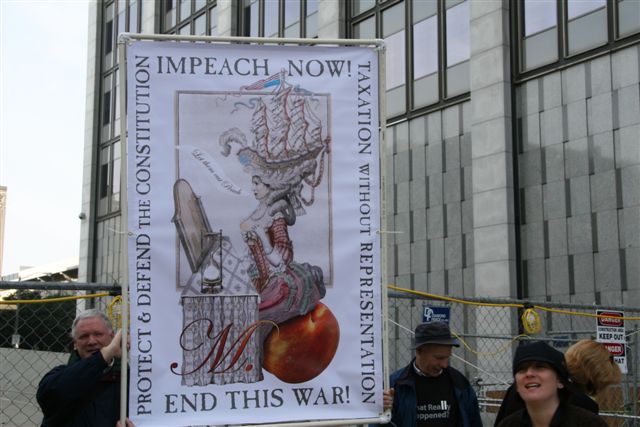 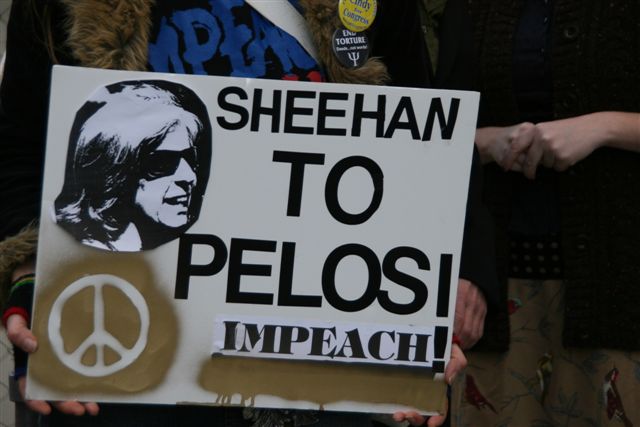 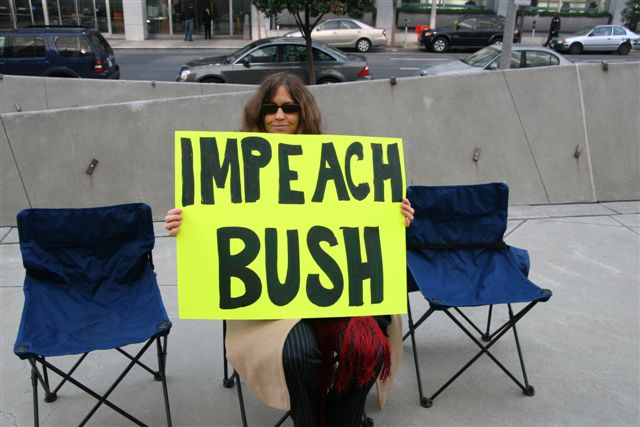 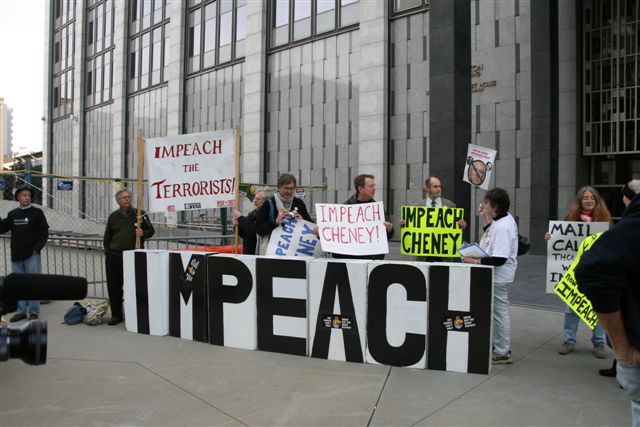 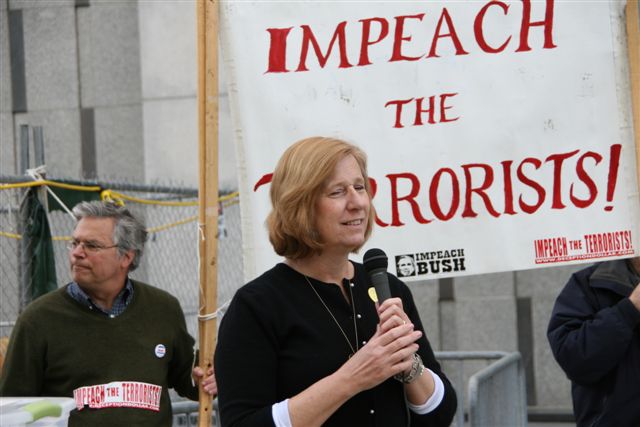 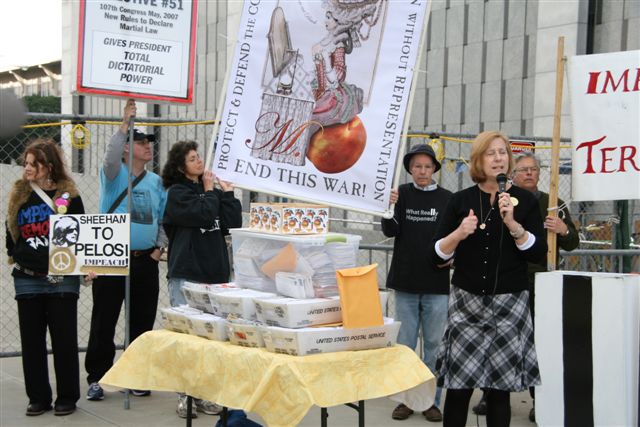 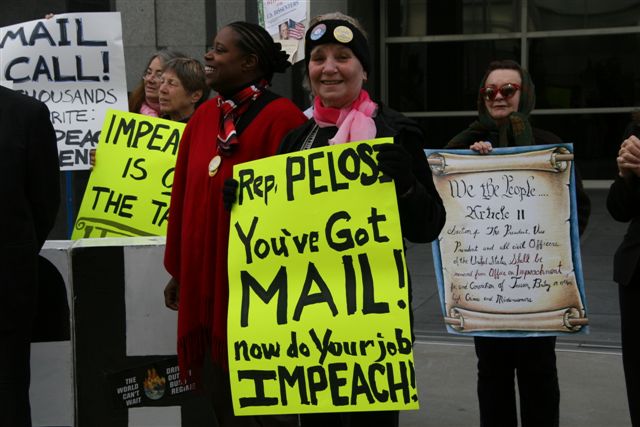 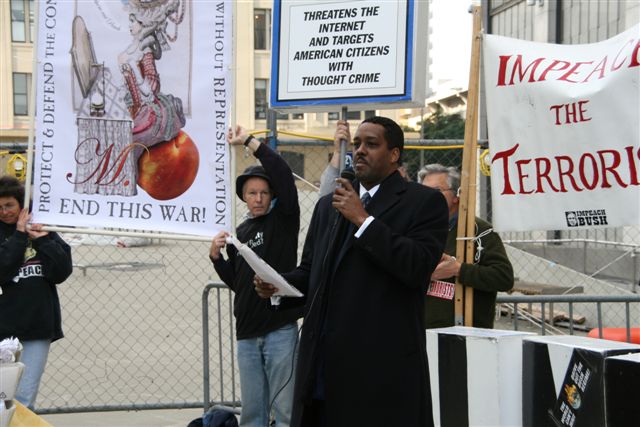 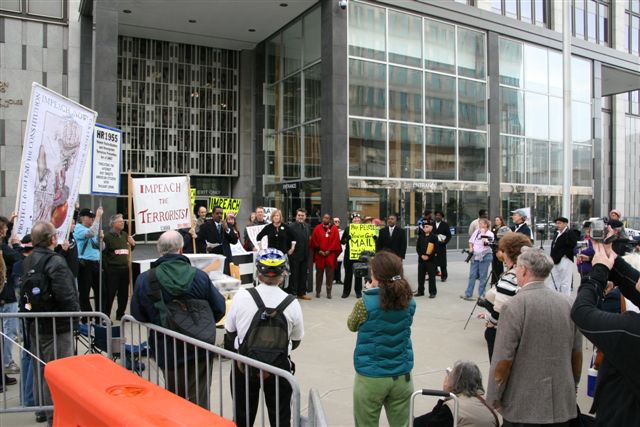 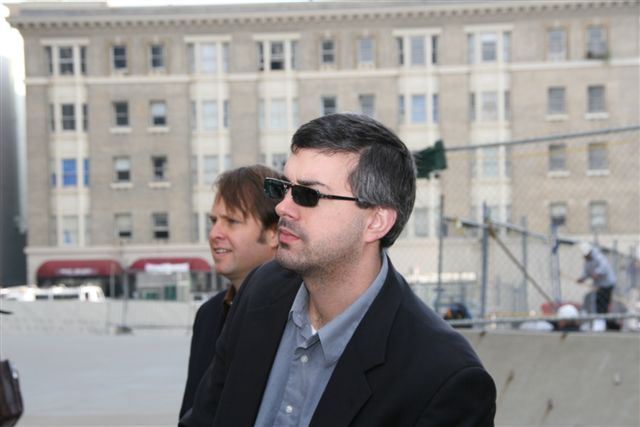 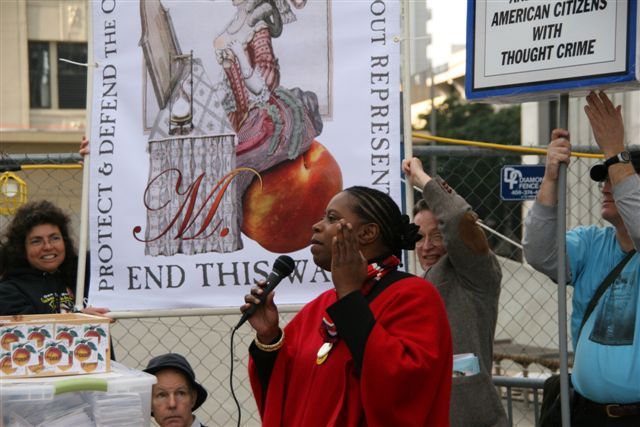 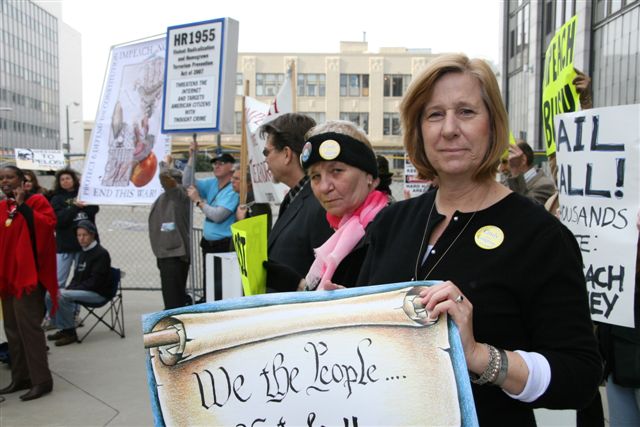 http://www.cindyforcongress.org/
Add Your Comments
LATEST COMMENTS ABOUT THIS ARTICLE
Listed below are the latest comments about this post.
These comments are submitted anonymously by website visitors.