Add an Event
Newswire
Calendar
Features
Home
Donate
From the Open-Publishing Calendar
From the Open-Publishing Newswire
Indybay Feature
Publish to Newswire
Add an Event
Related Categories: San Francisco | Government & Elections
Cindy Sheehan and thousands of nation-wide supporters want impeachment on the table
by Robert B. Livingston (gruaudemais [at] yahoo.com)
Monday Jan 14th, 2008 8:31 PM
Today the world-renowned peace activist and congressional candidate Cindy Sheehan was joined by numerous supporters outside of the San Francisco Federal Building to deliver thousands of letters and signatures urging Nancy Pelosi to impeach Vice President Richard B. Cheney for crimes against the U.S. Constitution and the American people. 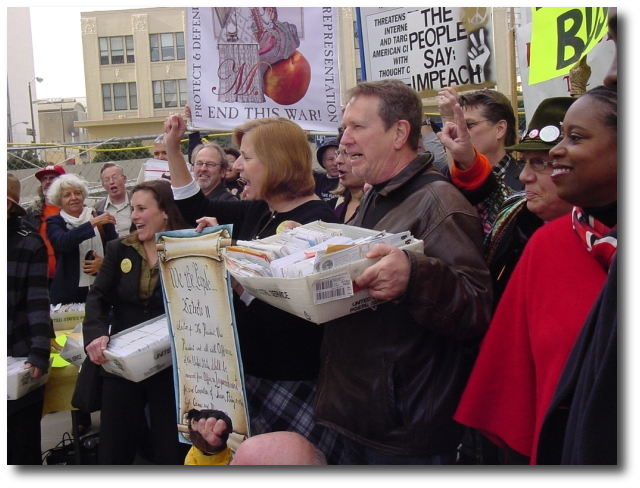 
Today U.S. Congressional Candidate Cindy Sheehan and supporters delivered approximately 8,000 hand-written letters and 3,000 signatures to Nancy Pelosi's San Francisco district office urging the House Speaker to initiate impeachment against Vice President Richard B. Cheney. The letters and signatures had been sent to Pelosi c/o Cindy Sheehan after it was rumored that Pelosi might consider impeachment if public outcry was great enough-- a rumor that was denied early by Pelosi who had adamantly declared that "impeachment is off the table."

Despite Pelosi's denial that she might ever consider impeachment-- Sheehan continued to collect the letters from people living all over the country-- and dutifully delivered them today to a representative at Pelosi's office after displaying them outside and addressing supporters about their significance.

All expressed their support for Representative Robert Wexler (D-Fl), a member of the House Judiciary Committee who will table his second motion tomorrow urging Congress to support impeachment hearings.  Wexler has generated a huge national interest in impeachment at his website wexlerwantshearings.com. Currently, over 188 thousand people have signed his petition urging Congress to impeach Cheney.

Cindy Sheehan stated today that "it is clear that the will of the people support the Impeachment of Vice President Dick Cheney.... Nancy Pelosi has a Constitutional duty to hold the President and Vice President accountable."

Cindy Sheehan is running against Pelosi as an independent candidate in the 2008 elections because Pelosi has NOT done her duty. 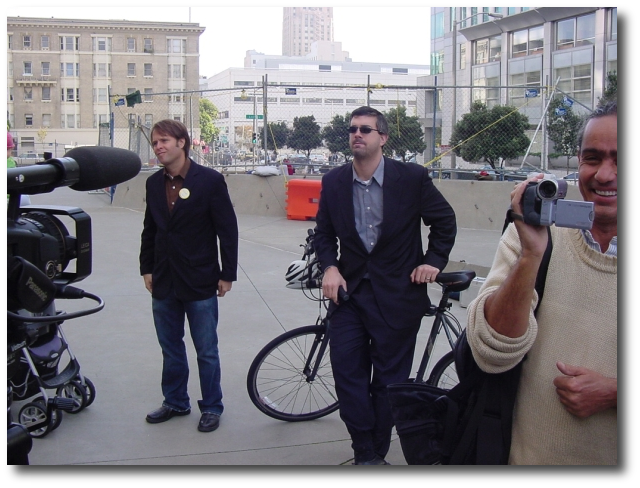 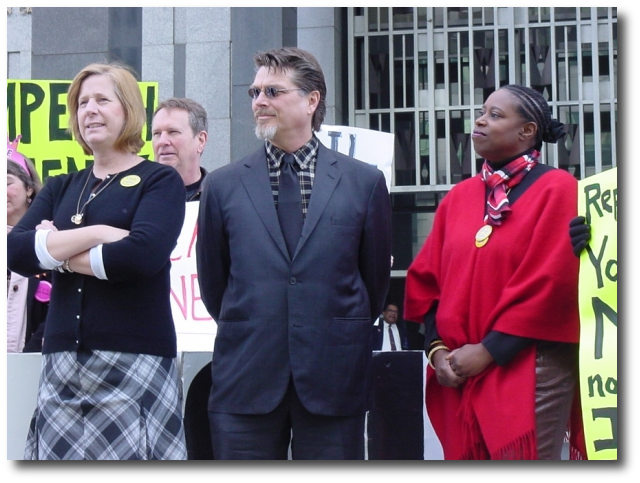 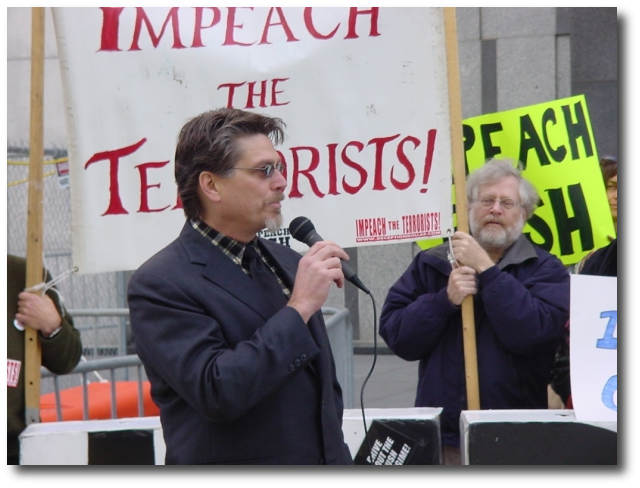 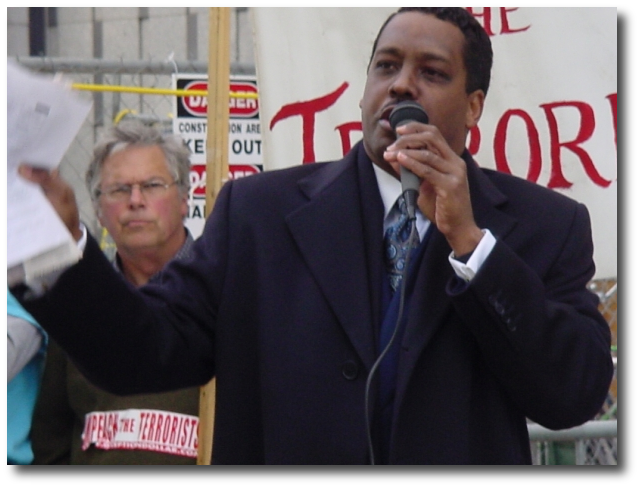 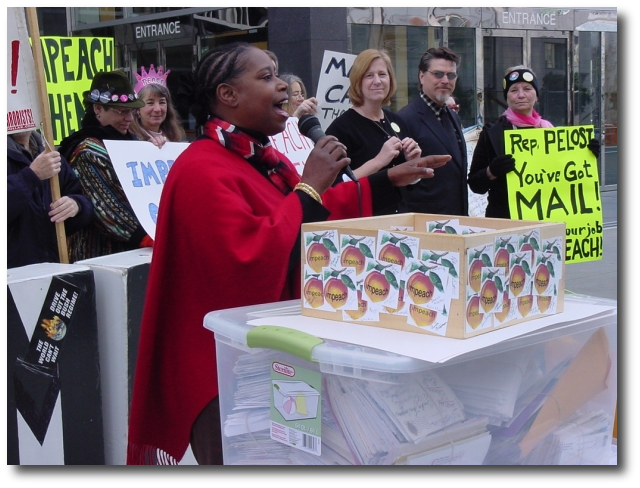 Former Democratic Party Congresswoman Cynthia McKinney was the first person to introduce articles of impeachment against President George W. Bush. She has since joined the Green Party, and is running for the its U.S. 2008 presidential nomination. Her website is:
http://www.allthingscynthiamckinney.com/
http://www.cindyforcongress.org/
§Cynthia McKinney's Speech
by Robert B. Livingston Monday Jan 14th, 2008 8:31 PM
Listen now:
Copy the code below to embed this audio into a web page:
Download Audio (7.6MB) | Embed Audio
McKinney explains the change she wants to see occur in America and why she wants impeachment.
http://www.cindyforcongress.org/
§Cindy Sheehan
by Robert B. Livingston Monday Jan 14th, 2008 8:31 PM 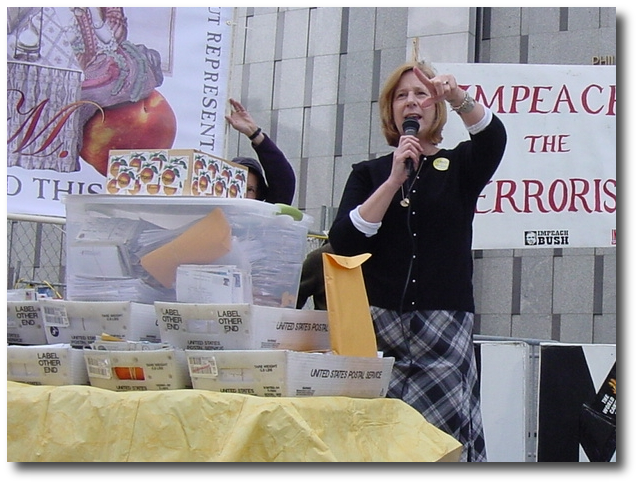 Despite being largely ignored and trivialized by the mainstream corporate media, Cindy Sheehan perseveres in her quest for justice and peace-- now by running against America's third most powerful politician, Nancy Pelosi. Pelosi refuses to meet with San Francisco peace activists, and she refuses to impeach Bush and Cheney whose lies to the American people are well-documented.
http://www.cindyforcongress.org/
§Cindy Sheehan speech before delivering letters to Pelosi's office
by Robert B. Livingston Monday Jan 14th, 2008 8:31 PM
Listen now:
Copy the code below to embed this audio into a web page:
Download Audio (3.0MB) | Embed Audio
http://www.cindyforcongress.org/
§Activists pick up the thousands of letters to deliver to Pelosi
by Robert B. Livingston Monday Jan 14th, 2008 8:31 PM 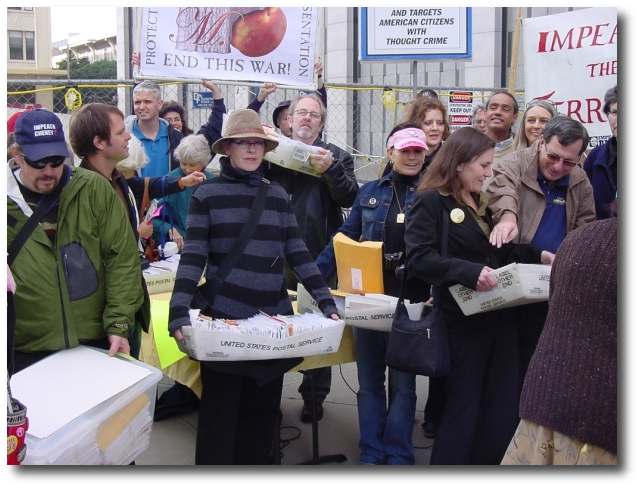 Cindy Sheehan reads a letter someone sent to her that was meant for Nancy Pelosi:
http://www.youtube.com/watch?v=kXv9s52zpzw
http://www.cindyforcongress.org/
§Standing at the entrance of the San Francisco Federal Building
by Robert B. Livingston Monday Jan 14th, 2008 8:31 PM 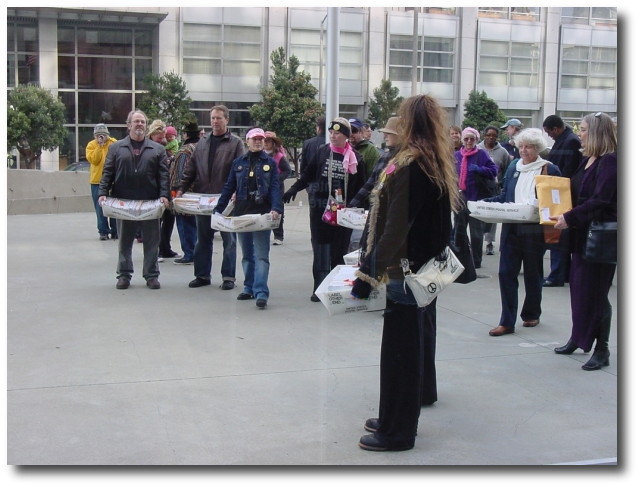 http://www.cindyforcongress.org/
§Activists deliver the letters through security to take to a Pelosi representative
by Robert B. Livingston Monday Jan 14th, 2008 8:31 PM 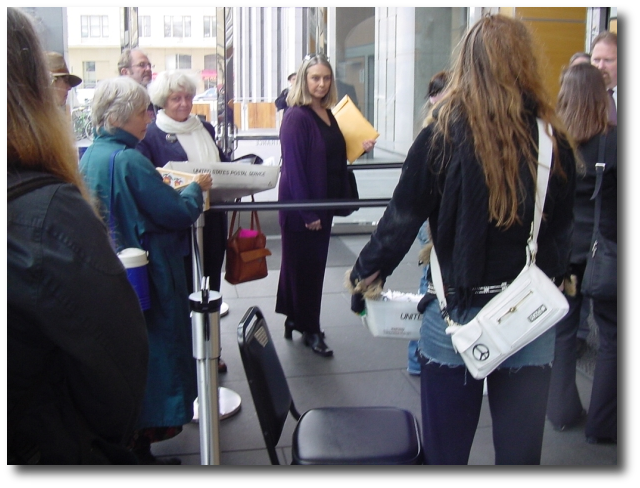