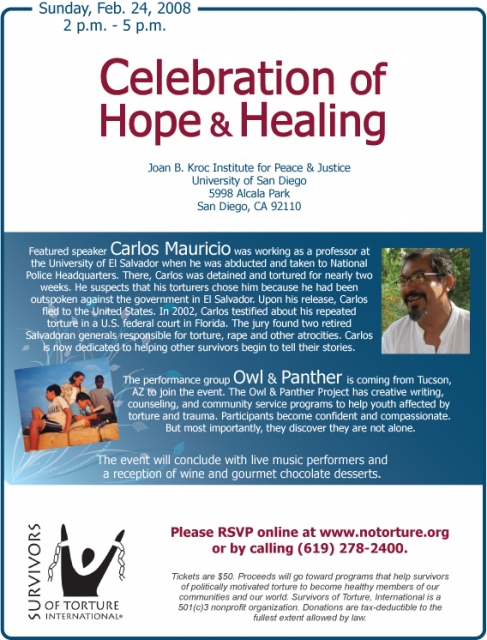 Description: The featured speaker will be Carlos Mauricio, a torture survivor from El Salvador.

Carlos was working as a professor at the University of El Salvador when he was abducted and taken to National Police Headquarters. There, Carlos was detained and tortured for nearly two weeks. He suspects that his torturers chose him because he had been outspoken against the government in El Salvador. Upon his release, Carlos fled to the United States. In 2002, Carlos testified about his torture in a U.S. federal court in Florida. The jury found two retired Salvadoran generals responsible for torture, rape and other atrocities. Carlos is now dedicated to helping other survivors begin to tell their stories.

The expressive arts group Owl & Panther is coming from Tucson, AZ to join the event. The Owl & Panther Project offers creative writing, counseling, and community service programs to help youth whose families have been affected by torture and trauma.

The event will conclude with live music performers and a reception of wine and gourmet chocolate desserts.

END_OF_DOCUMENT_TOKEN_TO_BE_REPLACED
Added to the calendar on Fri, Jan 11, 2008 10:30AM
Add Your Comments
Support Independent Media
We are 100% volunteer and depend on your participation to sustain our efforts!