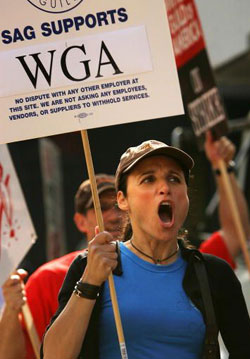 Labor On The Job Presents

Thousands of writers and musicians have been on strike against some of the biggest multi-nationals of the world. These writers will be the focus of this one hour show. Why are they striking, how does this affect other workers in the industry including actors and what this issue means for working people in other industries. We will also examine the role of new technology and how this can be used by media workers to produce their own material. Labor On the Job also goes on the picket line at the Disney store in San Francisco.
http://www.youtube.com/watch?v=Y4bs7gReixM
http://www.youtube.com/watch?v=Dg23x58zMYo&eurl=
http://unitedhollywood.blogspot.com/
http://www.youtube.com/watch?v=oQAzNsPLlDk