Add an Event
Newswire
Calendar
Features
Home
Donate
From the Open-Publishing Calendar
From the Open-Publishing Newswire
Indybay Feature
Publish to Newswire
Add an Event
Related Categories: Santa Cruz Indymedia | Environment & Forest Defense
Santa Cruz wind trees
by leni
Friday Jan 4th, 2008 4:33 PM
Everyone in northern California noticed a large windstorm starting Thursday January 3rd, so the experience was not unique. In Santa Cruz, my first thought was to check how the two month old redwoods tree-sit conducted in protest of the Long Range Development Plan at UC Santa Cruz were doing. This style of protest uses a lot of personal commitment, and the wind gusts might pose one of the greatest risks of the endeavor so far.
Copy the code below to embed this movie into a web page:
Download Video (3.3MB) | Embed Video
In the morning, the winds were not hurricane strength in my location, and were perhaps 45mph during gusts. Right when the front moved through around noon, it was probably higher, with intense rain causing flash flooding in the Santa Cruz mountains. In contrast, some friends in Sacramento reported much faster winds. At 9am, campus police had shut the main entrance to campus, although it was accessible through the west gate, and no downed trees or damage was visible anywhere. Lights were on in most academic buildings in central campus.
In the parking lot by the tree sit, a passive aggressive sign describing the sitters above had been installed. The trees were waving around, but I believe the intensity was mitigated by the rest of the forest. Two security guards got out of a car and appeared to be ready to dart over and stop me from tossing up any food. However, the presence of the guards suggested that the sitters were indeed up there and had not left. So hopefully they did okay during the stronger winds towards noon. I personally almost wish they would occasionally leave and then pick a different tree to use because the style of protest seems to register that they have been 'defeated' or gave up if they ever come down. With other important issues, we are lucky to get commitment from residents to attend a public meeting. The rain isn't clearly visible in this low resolution film clip, but it is fogging the lens.
§San Lorenzo
by leni Friday Jan 4th, 2008 4:33 PM 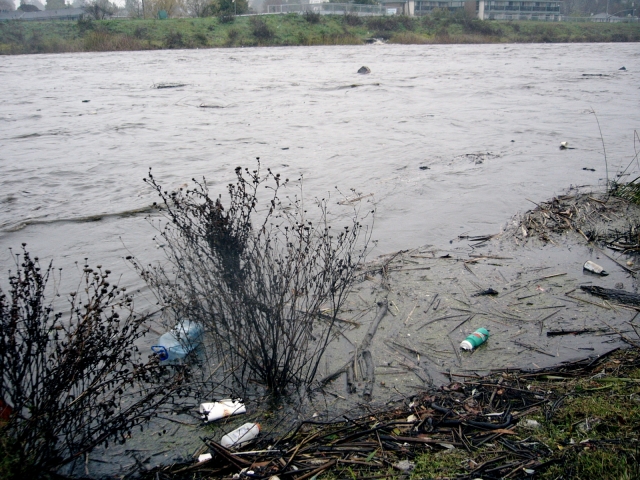 original image (1600x1200)
Later in the afternoon quite a bit of rain had fallen in the higher elevations, and all of this hydrologically drains through the San Lorenzo River or Soquel or Scott's creek. The water level is much higher than summer levels, where typically there is a small channel among the willows. It was still 10ft below the levee where it could flood, although it could potentially reach the footpath if it rose 2 feet.

Conceptually I have always had a problem with believing that the central Pacific garbage patch is caused by people littering plastic bags and six-pack rings at the beach. It seems like it must be caused by municipal garbage dumping at sea, because it is hard to believe that more than 1% of garbage could be escaping landfills, yet the garbage patch is so large.
But sure enough, at the river, there was a pretty impressive volume of plastic material going downstream, 90% of it plastic bottles, but also glass liquor bottles and styrofoam. Wouldn't you think that plastic bottles would sink if they didn't have their lids on? The police were going down the levee looking for people sitting on the banks. 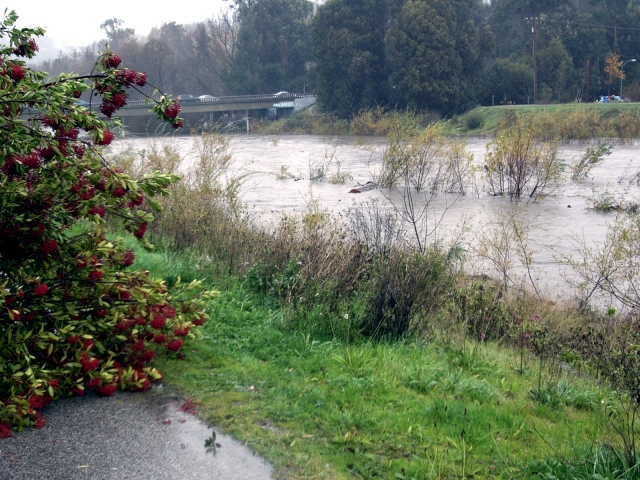