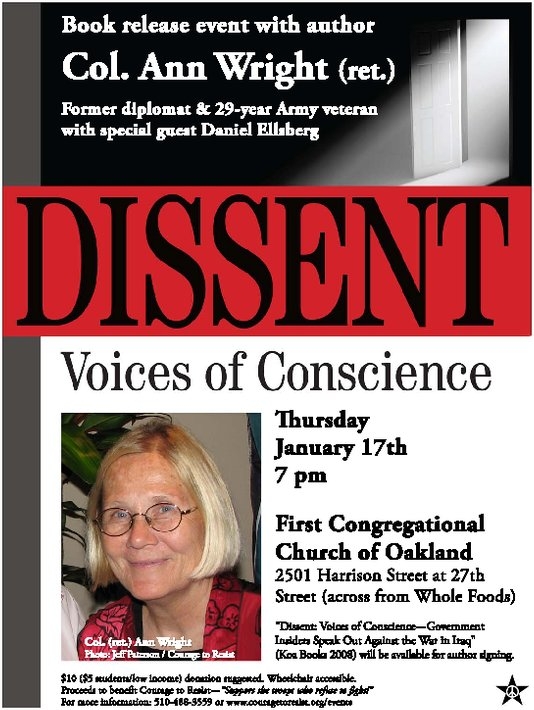 "Dissent: Voices of Conscience--Government Insiders Speak Out Against the War in Iraq" (Koa Books, January 2008) profiles government officials whose loyalty to the Constitution and the American people ultimately transcended partisan politics. Originally scheduled for release in 2007, publication has been delayed until now by the State Department's clearance process. Books will be available for author signing.

Author Colonel (ret.) Ann Wright resigned from the U.S. Foreign Service on March 19, 2003, while serving as Deputy Chief of Mission at the US Embassy in Mongolia, in protest of the war in Iraq and unnecessary curtailment of civil liberties. She joined the Foreign Service in 1987 and served in US Embassies in Sierra Leone, Micronesia, Uzbekistan, Kyrgyzstan, Grenada, Micronesia, Nicaragua, and Afghanistan. Before entering the Foreign Service, she served in the Army and Army Reserve for 29 years combined. She has Master's and Law Degrees from the University of Arkansas and a Master's Degree in National Security Affairs from the U.S. Naval War College.

With introduction from Daniel Ellsberg, the former military analyst who risked life in prison to release the "Pentagon Papers".

Also a brief report back from Courage to Resist organizers who attended a successful Parliament hearing in Ottawa on December 6th in favor of a provision to allow Iraq War military resisters to stay in Canada. A noon vigil and delegation to the Canadian Consulate in downtown San Francisco on Friday, January 25th is planned.

For more information, contact Courage to Resist at
510-488-3559 or http://www.couragetoresist.org/events

END_OF_DOCUMENT_TOKEN_TO_BE_REPLACED
Added to the calendar on Fri, Dec 28, 2007 12:53PM
Add Your Comments
Support Independent Media
We are 100% volunteer and depend on your participation to sustain our efforts!