Add an Event
Newswire
Calendar
Features
Home
Donate
From the Open-Publishing Calendar
From the Open-Publishing Newswire
Indybay Feature
Publish to Newswire
Add an Event
Related Categories: Afghanistan | International | Global Justice & Anti-Capitalism | Government & Elections
Benazir Bhutto: The fall of a corrupt puppet.
by asmani noor
Friday Dec 28th, 2007 12:05 AM
Benazir Bhutto, far from being a martyr for "democracy" was nothing more than a petty thief, and a corrupt US puppet. 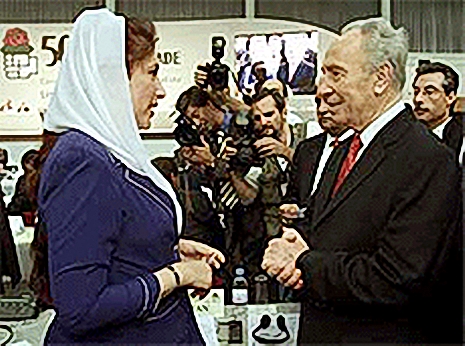 "I had the chance to meet her (Benazir Bhutto) on several occasions, in which she expressed interest in Israel and said that she hoped to visit upon returning to power." -Shimon Peres (President of "Israel", pictured above with Benazir Bhutto at a "socialist international" (sic) conference)

A few months back (October 18th, 2007) Benazir Bhutto returned to Pakistan at the behest of a three way arrangement between herself, the hated dictator puppet Musharraf, and the United States. At the outset of this arrangement, it was clear that Bhutto would provide the democratic facade to the neo-colonial project of the US in Pakistan.

In many ways she was the ideal US face on the "democracy promotion" lie: Benazir was "educated" at the Imperial University of Harvard, she was articulate when speaking the lies of imperialism (couched in terms of "democracy") and could even appeal to some of the lslamophobic liberal-left crowd with her fake social-democratic credentials, and she was considered "beautiful" by the gossip rags. The icing on the cake was her recent conversion to staunch secularist ideas (wrapped in a half covered head scarf ) and she now opposed the Islamic political parties within Pakistan (not that these "Islamic parties" in Pakistan have much to offer). I say recent conversion, because Benazir was the one who gave the go ahead to the horribly sectarian anti-Shia (and anti-Iran) Taliban, who took over Afghanistan in the late 1996s.

The Taliban took power in Kabul in September 1996. It was during Bhutto's rule that the Taliban gained prominence in Afghanistan. She viewed the Taliban as a group that could stabilize Afghanistan and enable trade access to the Central Asian republics, according to author Stephen Coll.[18] He claims that her government provided military and financial support for the Taliban, even sending a small unit of the Pakistani army into Afghanistan.


But before Benazir could return to Pakistan there was some work to be done:

1. Musharraf had to be convinced that his time was up - and now it was Benazir's time to serve the US.

This took some arm twisting, but he was convinced, he would allow Benazir to become the PM if he was allowed to remain the President.

2. The pending corruption charges in Pakistan had to be dropped.

Since few, if any of the big landlords (feudals) or capitalist industrialists are prosecuted for corruption anyways, this was no big deal.

3. Two acts had to be passed in order to allow Benazir to take the helm.

ii) Another constitutional amendment was to allow her to become the Prime Minister of Pakistan for the third time (and allow Musharraf to remain President).

These two ammendments were pending challenges in Pakistan's Supreme Court when Busharraf declared his martial law, got rid of the judges, and installed his own kind. These new judges, in blind obedience, did whatever was asked of them.

The declaration of martial law by Busharraf led to some minor concerns for Benazir because she came under some slight pressure from her liberal-elite supporters - so she made some half hearted attempts to challenge the measures. However, the declaration of martial law, and deposing of the judges were as much for her benefit, as for Musharraf. And she eventually backed off any direct confrontations, and was happy to continue as if nothing had changed. Benazir, now free of the corruption charges, free of any other constitutional road blocks, went into political deal making mode for her party to "win" the biggest share of seats.

These deals were to maintain the status quo in Pakistan, it would allow her to gain Prime Ministership with a host of loyal landlords and industrialists backing her, who would continue to have a free hand to loot the country of its wealth and resources. And her patron, the US, would continue its neo-colonial project unhindered about any worries about Pakistan not being a "democracy."

A Pakistani NGO reported that nearly half of the candidates on the PPP (Benazir's party) are feudal landlords, and most of the rest are connected to super wealthy industrialist types. Far from being a savior of democracy (in the better sense of this word) Bhutto was a savior of the feudals and industrialists.

Benazir was indicted at a Swiss court on charges of creating off shore companies to receive kick backs from government contracts.


It does need to be noted that none of what Benazir and her husband Zardari (aka Mr. 10%) did was out of the ordinary for the Pakistani elites. This is more of a reminder that, while the mainstream media is potraying her as a martyr for "democracy," she was, in reality, nothing more than a petty thief who deserved to have been tried in a court of law, and should have been serving out a jail sentence for corruption, not running for Prime Ministership.

Benazir's closeness to the present US regime was even more disturbing; in a recent statement, she made the incredible claim that

“In the past the United States would support dictatorships but now it is supporting democratic forces, which is a sign of encouragement for all the democracy-loving people."

Aside from her unstinting support of the US war on "terror" (i.e. war on Islam and Muslims) she did not have a single word of criticism for the continued US occupation of Afghanistan, and Iraq, and was all for having regular consultative meetings with US state department officials to coordinate her return to power.

Pakistan is undergoing its most difficult crisis yet, and without leadership, and no cohesive indigenous based ideology, the army is the only institution that can manage to stay in power. But a center that is based on such a high level of corruption, and obedience to imperial masters will not be able to hold on for any length of time. And unless there emerges a real grassroots movement for social and economic justice with an Islamic identity that would appeal to the masses, it will be difficult, if not impossible for the country to maintain its integrity.
http://ihsan-net.blogspot.com/2007/12/bena...
Add Your Comments
Support Independent Media
We are 100% volunteer and depend on your participation to sustain our efforts!