Delivering Food to Tree-sitters at UCSC on Christmas

Since November 7th, 2007, Coast Redwood trees on UCSC's Science Hill have been bases of resistance to campus expansion with students sitting on platforms situated in the crowns of numerous trees. Many students, staff and faculty at UCSC, as well as residents of Santa Cruz County, feel that UCSC's campus expansion plans are anything but beautiful. UCSC's 2005 Long Range Development Plan (LRDP) includes an additional 4,500 students by 2020, the destruction of 120 acres of forest, and a Biomedical Sciences Facility engaging in controversial, corporate-driven practices such as biotechnology, nanotechnology and invasive experimentation upon living animals (vivisection).

On December 25th, I explored a little bit of the UCSC campus and stopped by the parking lot on Science Hill to see if anything was going on at the tree-sit. This contentious parking lot is located where UCSC plans to build their Biomedical Sciences Facility. The facility would be the first project under UCSC's 2005 LRDP. During my brief time on Science Hill, numerous people brought food to the tree-sitters, including Michael Urban, a professor of politics at UCSC. 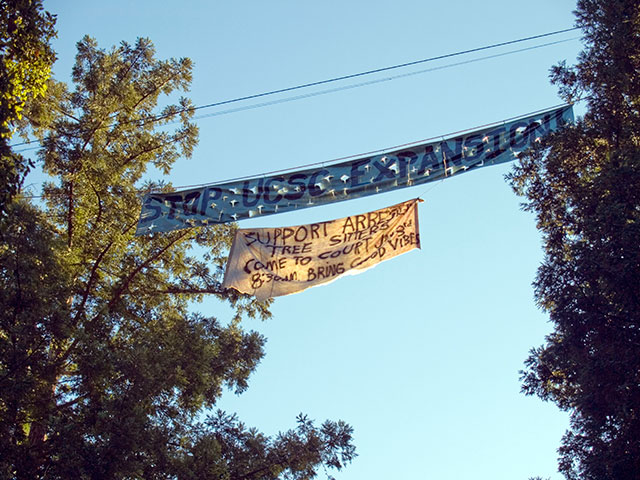 The Biomedical Sciences facility would be the first project under UCSC's plan to develop 120 acres of forest in order to accommodate 4,500 new students by 2020. The Biomedical Sciences facility will have no allotted classroom space, despite student complaints about overcrowded class sizes. However, the facility will have room for live animal experimentation, which includes such practices as food/air deprivation, infection, and non-anesthetized surgery, according to UCSC campus guidelines.

In Defense of Animals (IDA) is a registered 501 (c) 3 non-profit organization based in San Rafael, California that states, "Our mission is to end animal exploitation, cruelty, and abuse by protecting and advocating for the rights, welfare, and habitats of animals, as well as to raise their status beyond mere property, commodities, or things." In addition to their principal website, www.idausa.org, IDA also maintains a special website called, "The Truth about Vivisection" located at www.vivisectioninfo.org. The following information about vivisection was taken from VivisectionInfo.org. Learn more by reading the Frequently Asked Questions at VivisectionInfo.org.


The Truth about Vivisection

Every year, tens of millions of animals are dissected, infected, injected, gassed, burned and blinded in hidden laboratories on college campuses and research facilities throughout the U.S. Still more animals are used to test the safety of cosmetics, household cleansers and other consumer products. These innocent primates, dogs, cats, rabbits, rodents and other animals are used against their will as research subjects in experiments and procedures that would be considered sadistically cruel were they not conducted in the name of science.

Researchers claim that they must be allowed unfettered access to animals for experiments in order to find cures for human diseases, yet they refuse to address the serious ethical problems of torturing sentient creatures for research purposes. On top of that, over-reliance on animal experimentation has historically hindered scientific advancement and endangered human safety because results from animal research typically cannot be applied to humans. In fact, scientists could save more human lives by using humane non-animal research and testing methods that are more accurate and efficient.

For these reasons, IDA has been fighting to end the needless torture and death of animals and advance human medicine since 1983. Here are some of the major campaign victories we have achieved for animals in that time.

Eleven "CU-34" Monkeys Transferred to Sanctuary
For years, the Committee for Research Accountability, a project of IDA, fought to secure the release of 34 monkeys from the University of Colorado at Denver Health Sciences Center (UCDHSC). These monkeys, who had lived at UCDHSC their entire lives, were the subjects of cruel alcoholism and maternal separation studies conducted by researcher Mark Laudenslager. In September 2006, the University of Colorado Regents finally voted to relocate 11 of these monkeys from a 100 year old basement to a sanctuary in Texas where they will be able to experience freedom from abuse for the first time in their lives.

USDA Charges UCSF for Animal Welfare Act Violations
In 2005, the U.S. Department of Agriculture (USDA) charged the University of California, San Francisco (UCSF) with 89 violations of the federal Animal Welfare Act (AWA). The USDA's action followed years of protests by IDA and other Bay Area groups to expose the cruelty secretly taking place behind the walls of UCSF's laboratories. Instead of defending themselves in court and revealing their mistreatment of animals to public scrutiny, UCSF chose to pay a $92,500 fine, one of the largest ever levied against a research institution by the USDA.

In Defense of Animals has an active campaign against Stephen Lisberger's Monkey Experiments at the University of California - San Francisco. You can learn more about the campaign by visiting: http://www.vivisectioninfo.org/lisberger.html 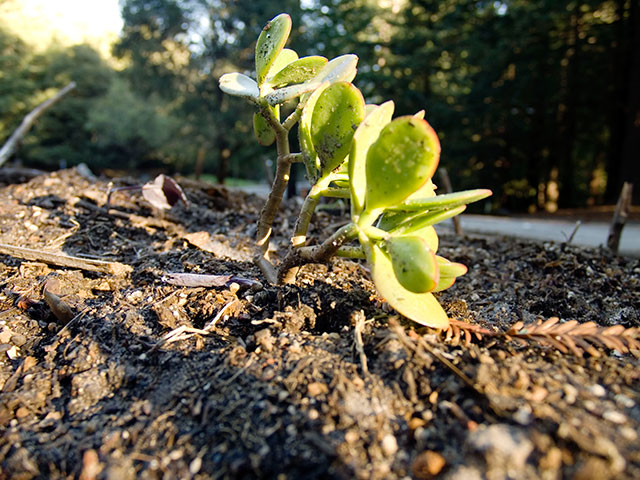 On December 17th, UCSC sent police officers, a clean-up crew, and a bulldozer to remove a few colorful garden-boxes from Science Hill. On December 25th, a succulent grows strong. For photos and video clips from December 17th, see: 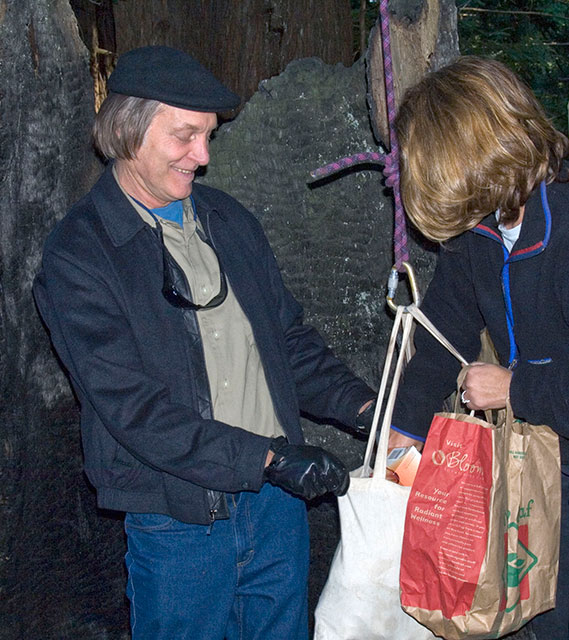 §Food Up!
by ~Bradley 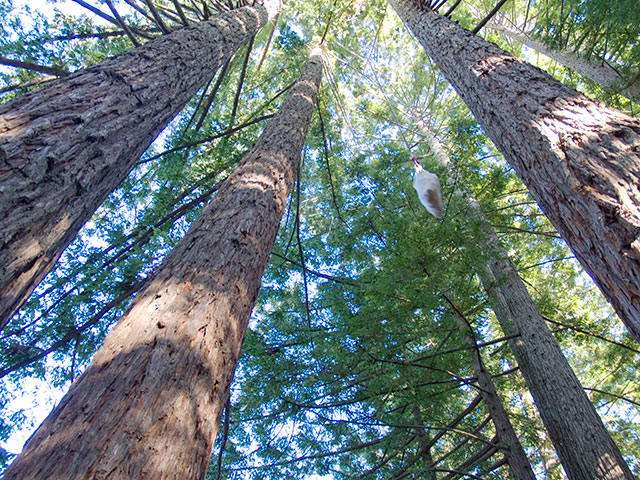 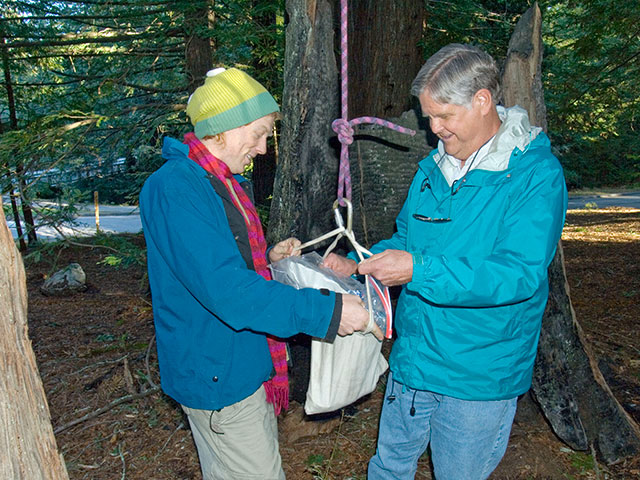 §Michael Urban is Armed with Two Pecan Pies
by ~Bradley 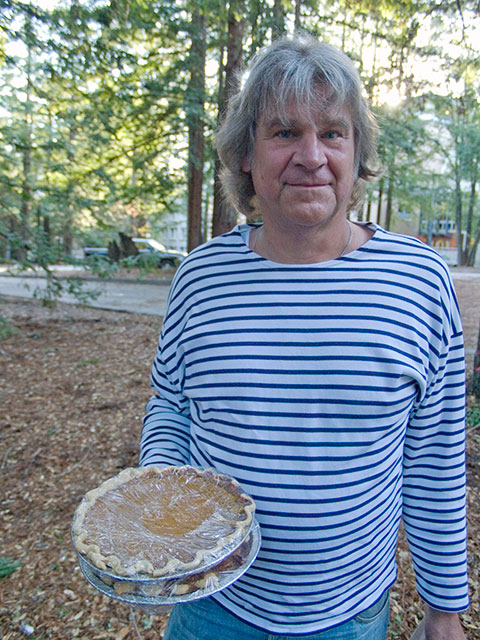 Michael Urban is a professor of politics at UCSC.
Add Your Comments
Latest Comments
Listed below are the latest comments about this post.
These comments are submitted anonymously by website visitors.
TITLE
AUTHOR
DATE
university official calls professor Michael Urban after seeing his photo on SC-IMC
Do university officials read Indymedia?
Served
Dragon Lover
Tree-sitters at UCSC on Christmas
Pat
where
WM
Surveillance Cameras Trained on Tree-Sit
JS
Delivering Food to Tree-sitters at UCSC on Christmas
Bradley
Support Independent Media
We are 100% volunteer and depend on your participation to sustain our efforts!