by Mike Rhodes (MikeRhodes [at] Comcast.net)
A memorial service for homeless people who have died in Fresno over the last couple of years was held today. 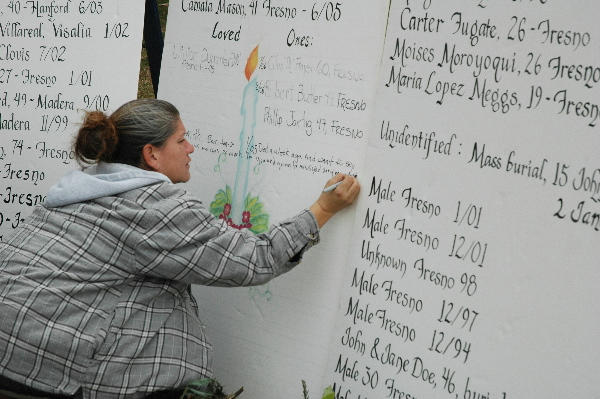 Al Williams, a homeless man in the Roeding Park area, spoke at the event. His wife Sherri, who died last Thursday, was the most recent homeless person to die on the mean streets of Fresno. Sherri needed surgery earlier this year to resolve several health issues, but was refused service at Community Hospital (they have a contract with Fresno County to provide health services for people who have no insurance and can’t afford the cost). At that time, Community Hospital gave Sherri a voucher for a taxi that left her in a dirt field. Some people call that patient dumping. Because of the conditions she was living in, Sherri’s health deteriorated and she was taken back to Community about a week ago. This time, she did not come back. Her life was honored at today’s memorial service. There will be an additional memorial service for Sherri on Saturday, January 5.

Pam Kincaid, another homeless woman who died this year, was also remembered. Pam was the lead plaintiff in the lawsuit against the City of Fresno to stop them from taking and immediately destroying homeless peoples property. She died under extremely suspicious circumstances. For more information about the circumstances of Pam’s death, see: http://www.indybay.org/newsitems/2007/08/18/18441458.php

The Homeless Person’s Memorial day in Fresno was coordinated by a grassroots group of homeless advocates and homeless people. Some transportation was provided from a homeless encampment in downtown Fresno, but most homeless people attending were from the Roeding Park area. This was one of many homeless memorial services held throughout the nation. For more information about these events, coordinated by the National Coalition for the Homeless, see: http://www.nhchc.org/memorialday.html

The group stood in a circle and read the names of homeless people who have died in the Fresno area.
END_OF_DOCUMENT_TOKEN_TO_BE_REPLACED
§Al, Jose, and Gloria
by Mike Rhodes 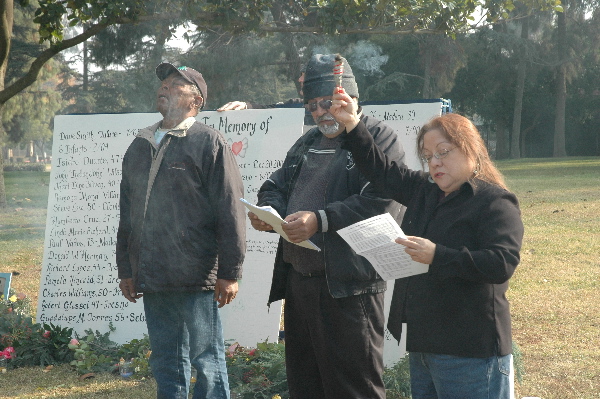 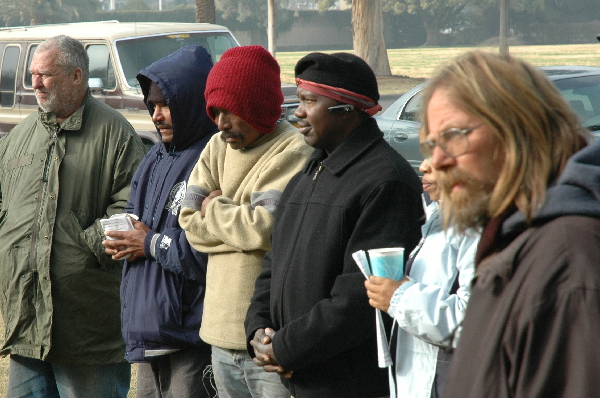 All photos by Mike Rhodes
END_OF_DOCUMENT_TOKEN_TO_BE_REPLACED
Add Your Comments
Comments (Hide Comments)
§A Christmas Blessing
by Cynthia Chapman Manuszak
I just wanted to say that I attended the memorial with my two youngest children and was so grateful to be able to honor my fathers memory.
This was a very touching event. The community should know how much Mike Rhodes and his wife do to help the homeless community. Treating them with the dignity that they deserve. It is wonderful! However, going back in my mind to all the suffering my father endured in his life on the street, it saddens me so that he has died and left behind his family. There was no one there for him when he lived that life, but I am glad to see that now a difference is being made and will continue to improve. We are all human beings on this earth together. By the grace of God go you or I.
God bless your sweet soul daddy!
Add a Comment
Support Independent Media
We are 100% volunteer and depend on your participation to sustain our efforts!