Add an Event
Newswire
Calendar
Features
Home
Donate
From the Open-Publishing Calendar
From the Open-Publishing Newswire
Indybay Feature
Publish to Newswire
Add an Event
Related Categories: Santa Cruz Indymedia | Education & Student Activism | Environment & Forest Defense
Report & more photos from Dec. 17 police actions at UCSC tree-sit
by Shreve
Wednesday Dec 19th, 2007 1:10 AM
The police action on Monday morning (Dec. 17) at the Science Hill Tree-Sit was little more than an intimidating ruse. About five uniformed officers and at least as many plainclothes officers accompanied a "clean-up crew" consisting of a backhoe, a giant dumpster, a cherry-picker and a street-sweeper with accompanying workmen. But what did they find to fill their gargantuan dumpster with? 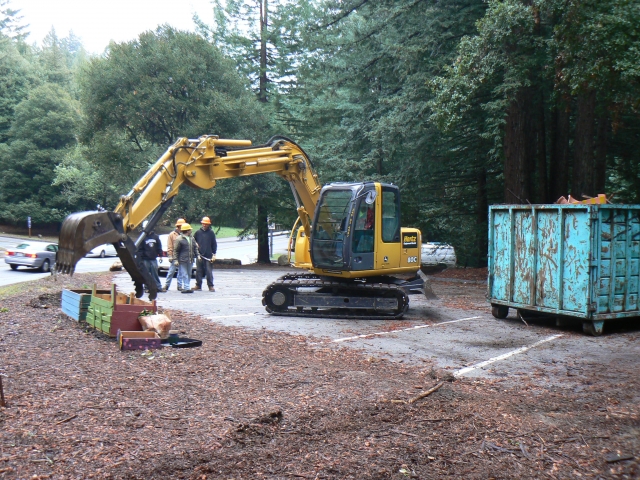 original image (2816x2112)
The real "clean-up" action at the site was taken by tree-sit organizers themselves, who removed the ground camp in its entirety and extensively cleaned the area last Friday (Dec. 14th) in preparation for Winter Break. All that the tree-sitters left on the ground was the empty Elfland-style "dens" made of branches, a picnic table, a "Save Upper Campus" info-board and a few colorful garden-boxes.

Naturally, tree-sitters and their supporters did not take the appearance of a police-accompanied cherry-picker lightly. Emergency phone calls and emails were made, and over the next couple of hours, 40 or so people showed up to see what was going on and show support. As the University-ordered antics proceeded, observers stood nearby with cameras and loud mouths.

The starring role of the backhoe was to take a few small planter boxes harboring young kale, beets and lettuce in to its steel jaws. The cherry-picker noisily lifted in to the air to clip down a giant banner that was suspended between trees. It then reached menacingly higher, towards the upper banner ("Stop UCSC Expansion"), only to stop in mid-air and retreat back to the ground. The next toy that rolled up was a street-sweeper, which rolled around in circles, removing all the redwood "duff" (leaf-litter) that had accumulated in the parking lot.

Were we about to witness an attempt at forcibly removing the tree-sitters? Although an officer stated that extraction was not part of the plan, cops lie, and there was no way to be sure until the cherry-picker made a final retreat.

It has been suggested in other reports that this police maneuver may have been a way of testing the water in preparation for removing the tree-sitters at a later date. But most everyone, UC administrators included, agree that extraction remains far too dangerous to be a feasible option for the University. In Berkeley, where a tree-sit on UCB campus has been established for over a year, extraction has been considered at length by administrators, and ultimately dismissed. 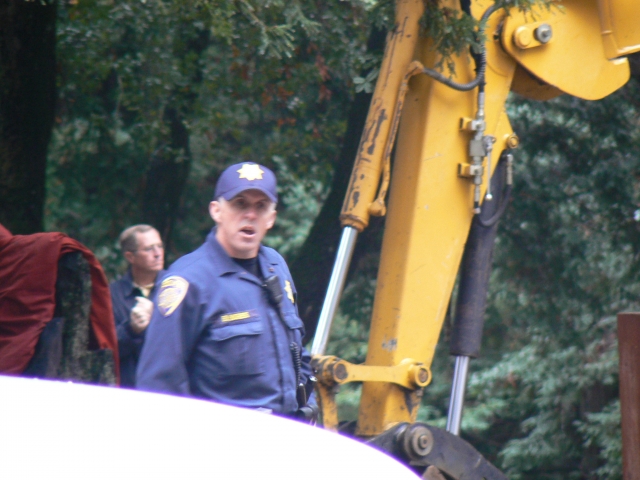 original image (2816x2112)
Infamous UCPD Officer Brian Hughes was there, posturing and glaring with a hand on his club.
Read about Hughes record of excessive force and aggression:
http://www.indybay.org/newsitems/2007/11/08/18459337.php 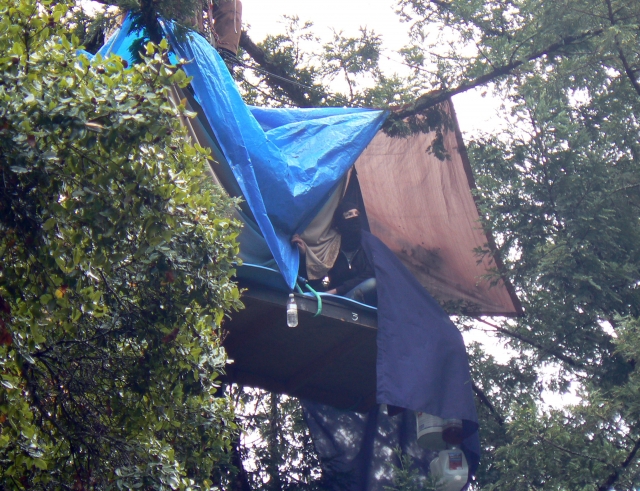 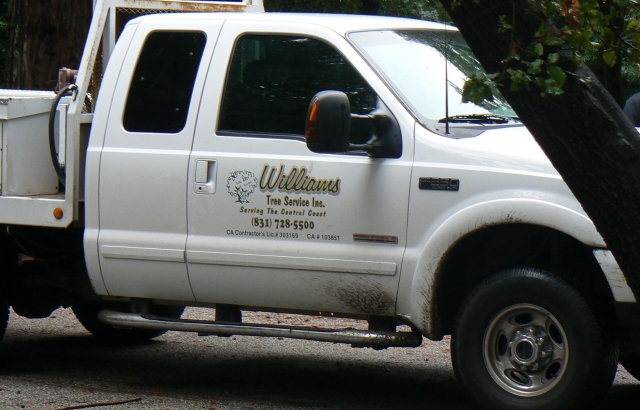 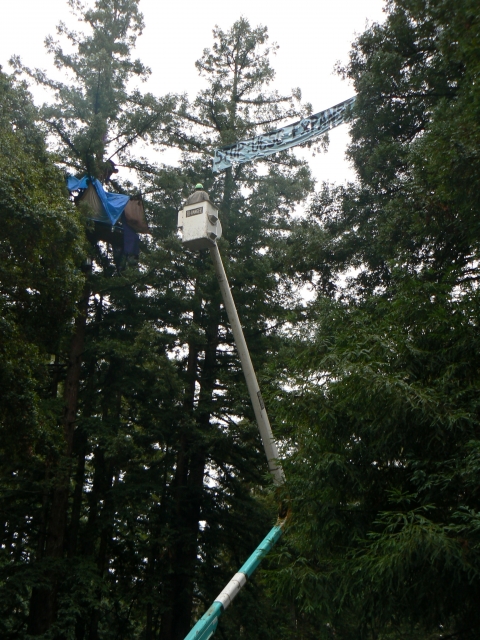 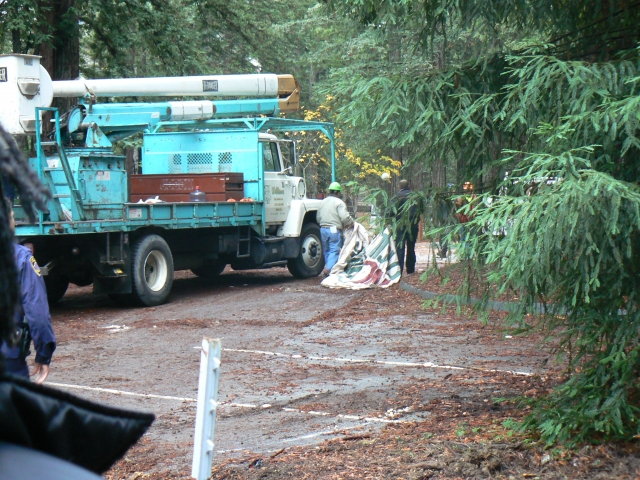 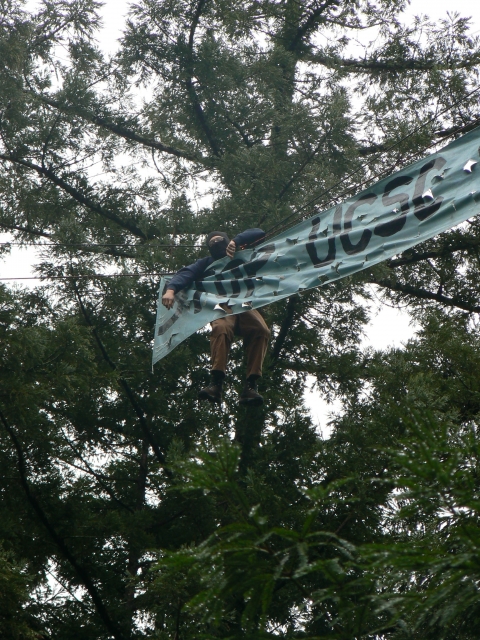 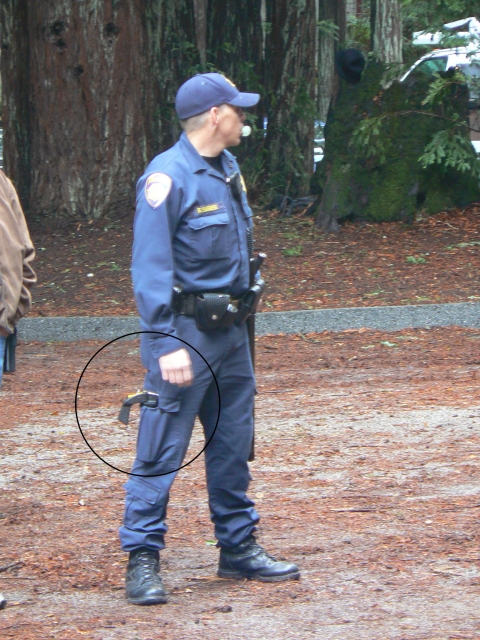 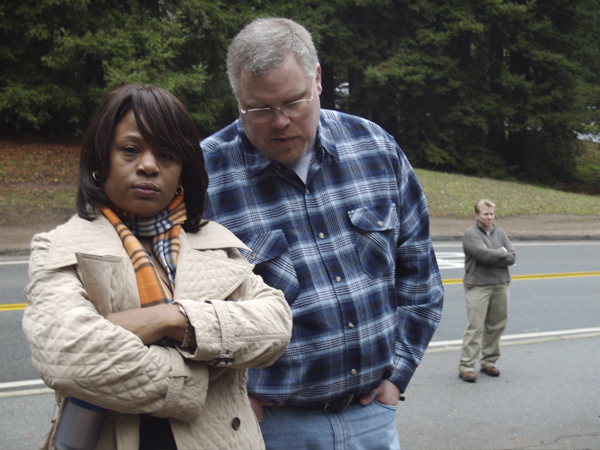 For McGinty, the University's "Time, Place and Manner" regulations for political demonstrations are of the utmost importance. Free Speech must be confined to the proper zones, and planned in cooperation with administration!
mcginty [at] ucsc.edu
§Crunch - backhoe eating garden beds, officers catching flack
by Shreve Wednesday Dec 19th, 2007 1:10 AM
Copy the code below to embed this movie into a web page:
Download Video (4.9MB) | Embed Video
"You call this progress? I call that progress! You're putting my progress in the fucking trash can!"
§Re-planting the rescued seedlings
by Shreve Wednesday Dec 19th, 2007 1:10 AM 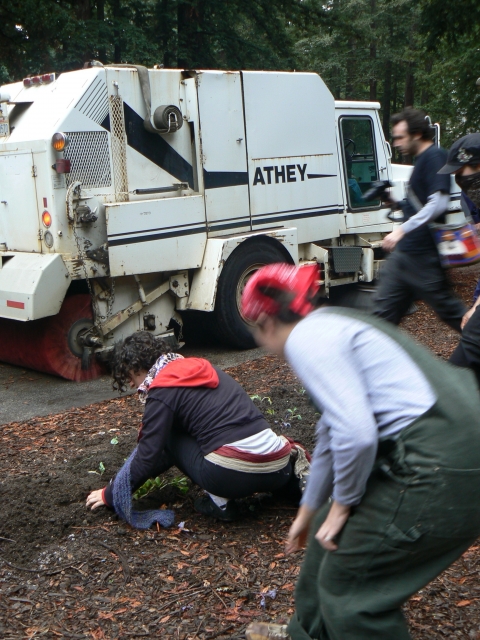 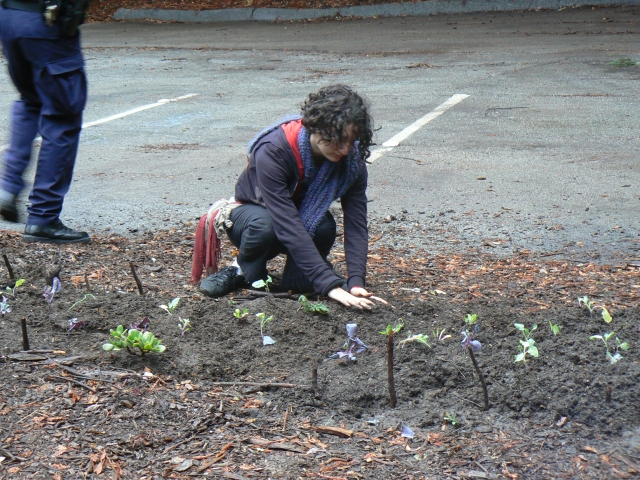 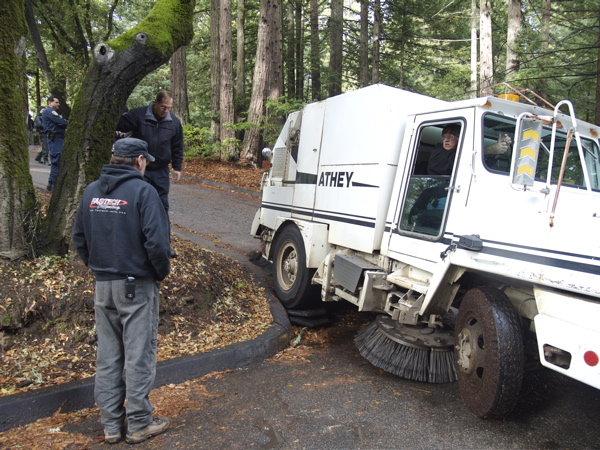 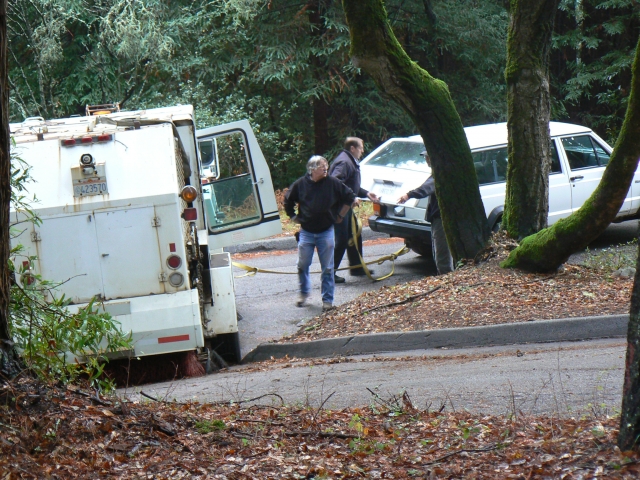 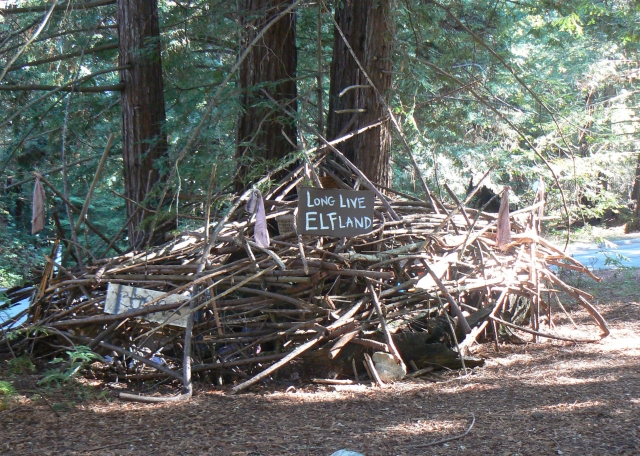 original image (2530x1806)
Elfland was a part of the Upper Campus forest that was particularly treasured by students, until it was destroyed amid heated protests in 1990 to build Colleges 9 and 10.
Elfland was made up of a series of dens, created by weaving branches in to "fairy circles" of redwood trees. Each den had a name and a theme of sorts, they were all decorated and full of treasures.
http://geocities.com/scpeopleshistory/files/elfland-pressrelease.html
§The info board that was taken by cops
by Shreve Wednesday Dec 19th, 2007 1:10 AM 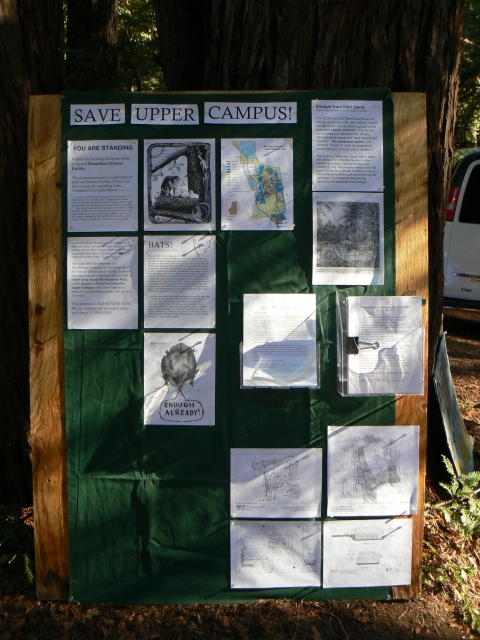 original image (2112x2816)
§To clarify
by Chris Wednesday Dec 19th, 2007 1:22 AM
To clarify, for those who have read inaccurate reports elsewhere - no tree-sit supplies, food, sleeping bags, literature tables, phone lists, trash piles, or anything of the sort was present on the site when the police arrived. Tree-sit organizers fully expected a police raid and prepared for it in advance. The site was clean.