Add an Event
Newswire
Calendar
Features
Home
Donate
From the Open-Publishing Calendar
From the Open-Publishing Newswire
Indybay Feature
Publish to Newswire
Add an Event
Related Categories: San Francisco | Anti-War
SF 9/11 Truth Tea Party Dumps Tyranny!
by Sojourner Truth
Tuesday Dec 18th, 2007 4:53 PM
The spirit of '73 -- that is 1773 -- was proven to be alive and well as San Francisco Bay Area activists and concerned citizens came out on Sunday, December 16, 2007, to reenact a modern-day version of the Boston Tea Party, albeit with a twist: Instead of dumping tea into the Boston Harbor to protest unjust taxation by an oppressive king, they dumped the 9/11 Commission Report into the Bay to protest tyranny under another King George. 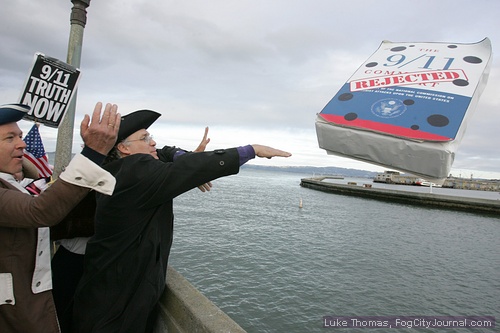 The crowd of about 50, many of them dressed in Revolutionary-period clothing, congregated under a large replica of the 9/11 Commission Report covered with holes at Pier 41 to hear activists read a 9/11 Truth Proclamation and denounce other recently passed legislation that take away Americans' Constitutional rights.

Similar reenactments were held in Boston, San Diego, Cincinnati and other U.S. cities.

Carol Brouillet, founder of the Northern California 9/11 Truth Alliance read from the 9/11 Truth Tea Party Proclamation, which outlined a lengthy series of "Whereas" highlighting multiple lies and deceptions regarding the events surrounding September 11, 2001 as well as the whitewash of the 9/11 Commission Report which didn't even mention World Trade Center Building 7, one of the most outrageous omissions in the Report. The Proclamation also calls for a new, independent investigation, with input from family members and independent researchers regarding the events of that day.

This year, citizens expanded on the list of grievances by speaking about recent legislation that further erode Americans' civil liberties and freedoms. Dylan Avery and Jason Bermas, two of the filmmakers who created the Internet blockbuster film "Loose Change" discussed the recently passed H.R. 1955: The Violent Radicalization and Homegrown Terrorism Bill, which criminalizes speech, and Presidential Directive #51, an executive order that would allow the executive branch to effectively take over all aspects of government under martial law. Other speakers spoke on the Patriot Acts I and II and the Military Commissions Act of 2006, two bills which destroy various parts of the Bill of Rights.

After arousing the attention of the crowd, and the Pier 39 security who insisted that the sidewalk was private property, the group started marching up Jefferson Street where they handed out Deception Dollars, 9/11 fact sheets and glossy cards with a representation of Nancy Pelosi as Marie Antoinette sitting on a large peach. The image, created by Santa Cruz artist Sandra Taylor, was designed to call on Nancy Pelosi to fulfill her constitutional duties by impeaching Dick Cheney and George Bush for committing high crimes and misdemeanors.

The marchers then ended up at the entry way to Aquatic Park and were met with park police who refused to let the group walk through the park to reach the Municipal Pier where they planned to toss facsimiles of the 9/11 Commission report and other legislation into the Bay. Organizers had waterproofed the items and intended to retrieve them immediately after they were thrown so as not to pollute.

According to one of the organizers, there were some tense moments when the park police decided at the last minute to revoke the temporary permit they had just granted to the group. After intense negotiations with a Sgt. Hart, the group was permitted to throw one item into the Bay, however, they were told they would not be allowed to walk on federal property to do so.

Baffled by the claims that citizens could not walk on federal property to a municipal pier, organizers started to remind the police of their Constitutional rights.

"According to the First Amendment, we have a right to free speech and to carry signs in public. Do you remember your oaths to defend and protect the Constitution?" said John Wright, one of the organizers of the event.

Eventually, after one more Rally at the Hyde Street cable car turnstile, marchers made it to the Municipal Pier and recited the Proclamation one more time before tossing the 9/11 Commission Report into the Bay to the cheer of boisterous "hoorays!" from onlookers. 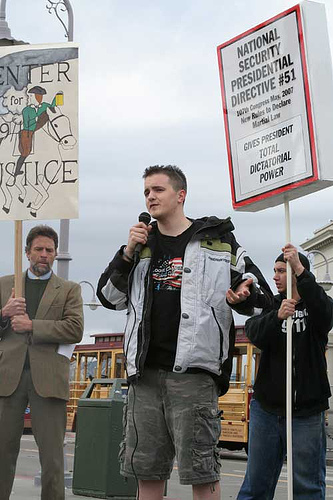 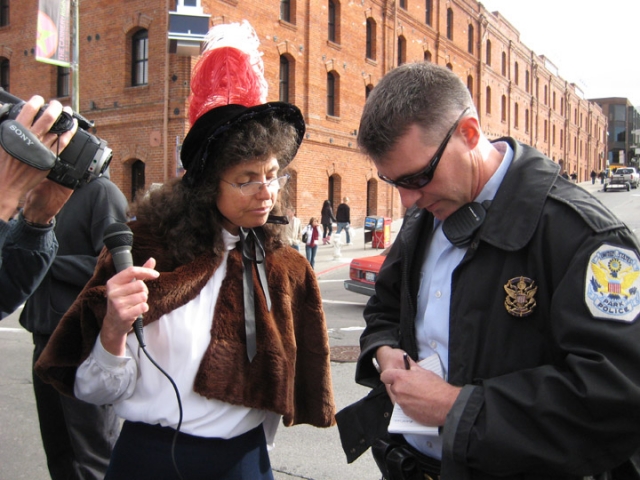 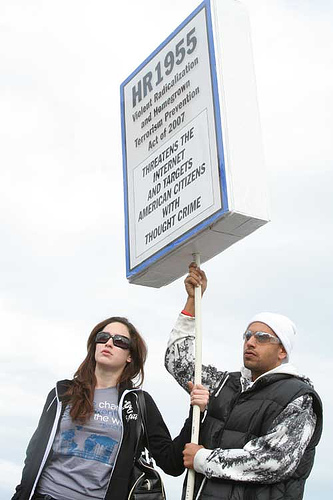 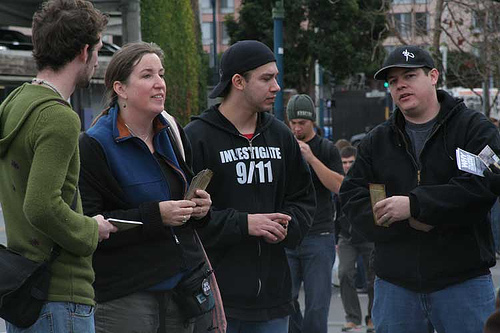 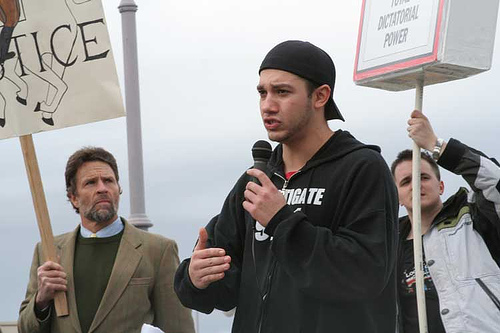 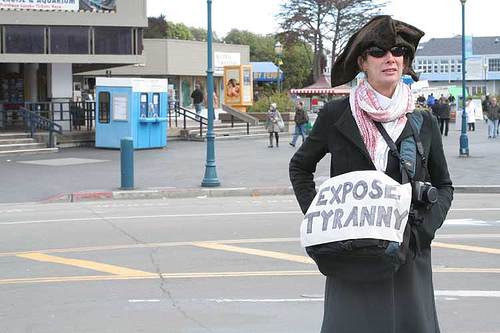 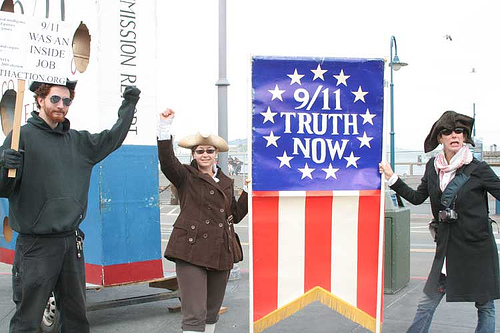 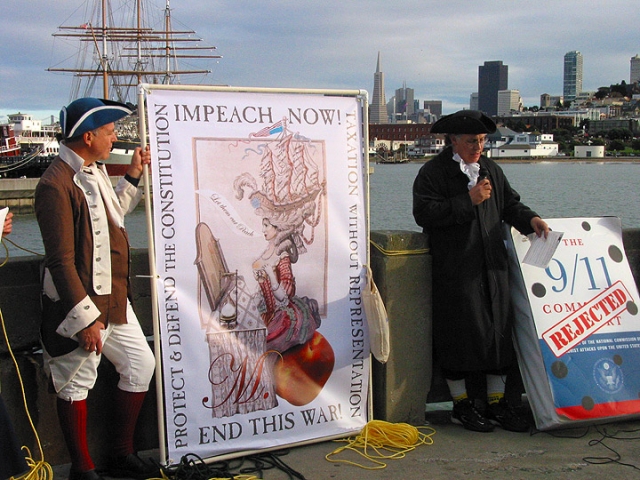 original image (720x540)
Photo by Sandra Taylor
http://sf911truthteaparty.blogspot.com
Add Your Comments
LATEST COMMENTS ABOUT THIS ARTICLE
Listed below are the latest comments about this post.
These comments are submitted anonymously by website visitors.