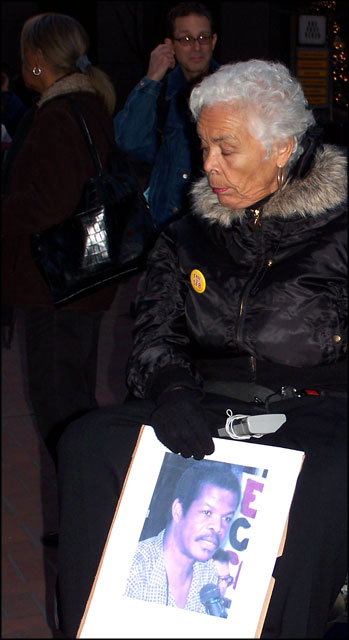 Haiti Action Committee Member Leslie Mullin told the crowd of about sixty people, “We are here to keep up pressure on those who hold power in Haiti, and that’s the UN and the United States.” She described the nature of the UN mission in Haiti, which was put in place shortly after the U.S.-backed 2004 coup which ousted the democratically-elected government of Jean-Bertrand Aristide, as being characterized by recent scandals involving sex trafficking and abuse of Haitian women and girls by UN “peacekeepers.” Mullin said that the Aristide government, and the Lavalas movement that elected him, were on a path away from misery for the country’s majority, but that the 2004 coup showed “the U.S. and its allies will do anything to crush opposition.”

Pierre Labossiere, co-founder of the Haiti Action Committee, held up his cell phone so activists in Haiti could hear the crowd shout out raucous chants in support of Lovinsky and Lavalas. Labossiere said he’d spoken earlier in the day to protestors in London, and that British members of the group Global Women’s Strike had helped shepherd a resolution calling for the return of Lovinsky through Parliament.

Labossiere saluted Danny Glover, Martin Sheen, Margaret Prescod and others in Los Angeles who had launched a “rolling fast” for Lovinsky. Several Bay Area activists were also participating in the fast. (Each Tuesday, an international alliance of activists formed under the initiative of the Ad Hoc Working Group on Haiti is sponsoring vigils and a fast in front of Brazilian consulates from Los Angeles to London.)

Labossiere said of the UN mission (MINUSTAH), “Haiti is occupied – let’s not pretty it up” and that “instead of improving things, they’ve made it worse.” He also condemned Amnesty International and Human Rights Watch for saying nothing about Lovinsky Pierre Antoine’s abduction.

(After the demonstration I emailed human rights lawyer Brian Concannon of the Institute for Justice and Democracy in Haiti. Concannon echoed Labossiere’s criticism: “Grassroots human rights activists in Haiti know that their work is dangerous. Believing that people overseas would respond if something happened to them used to help keep them going. But now the most prominent grassroots activist has been missing for four months, without a word from the established international human rights organizations. That makes them
feel scared, and alone.”)

Javad Jahi of the Malcom X Grassroots Movement recently returned from Port-au-Prince, where he attended the trial (on trumped up charges) of activist priest Fr. Gerard Jean-Juste. Jahi told the San Francisco demonstrators that what he saw in Port-au-Prince was “systematic terrorism going on.” He encouraged everyone to educate friends, coworkers and others about the truth in Haiti, and asked the crowd “we have people who rose up in arms about South Africa, how come people are not rising up about Haiti?” Jahi condemned the UN role in Haiti, denouncing the international body for “shut[ting] down hospitals and schools … [to house] UN troops.”

Before the demonstration left Market Street, activist Marilyn Langlois read a statement from Richmond Mayor Gayle McLaughlin calling for Lovinsky’s safe return to his family. It read, in part:

“Richmond also shares with Haiti a vital asset that cannot be discounted: the wealth of human spirit found in the resourceful and courageous people who live there and persist in standing up for everyone's right to a decent living, a supportive community and full inclusion in charting the future.

“When Mr. Lovinsky is safely returned, he will be welcome to visit us in Richmond any time, and I will gladly declare him an honorary resident of our city.”

By the time that statement was read, the protest had swelled to more than seventy people, who followed assorted banners and three African drummers up Montgomery Street past hordes of salarymen and women getting off work in the financial district. Once at the Brazilian Consulate, Pierre Labossiere used the nice acoustics of the street’s artificial canyon to further denounce the military occupation of Haiti, under the command of Brazilian general Major-General Carlos Alberto Dos Santos Cruz. The spirited drumming continued, and activists engaged passersby in political discussion.
http://www.haitisolidarity.net/
§Haiti Action Committee
by Ben Terrall & Bill Carpenter Friday Dec 14th, 2007 4:24 PM 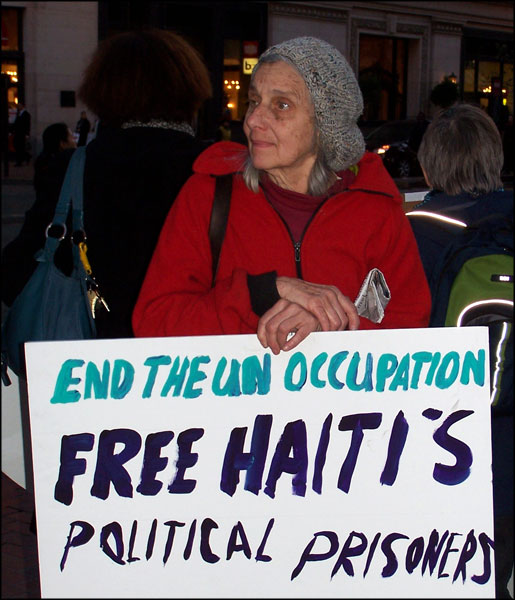 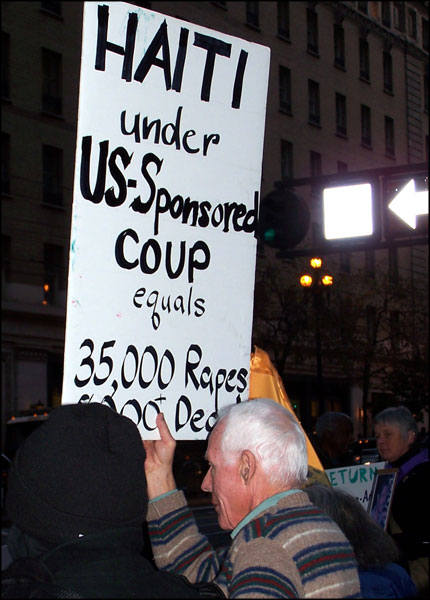 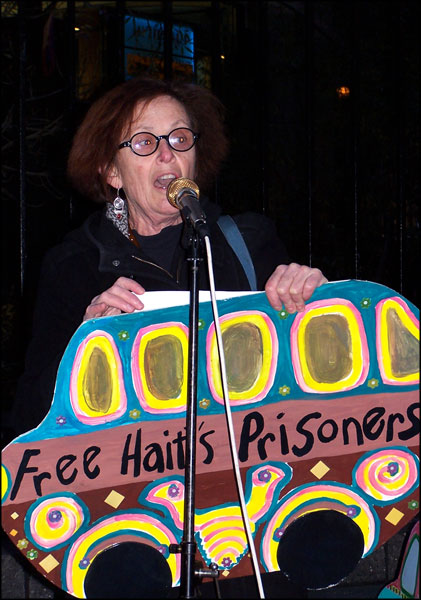 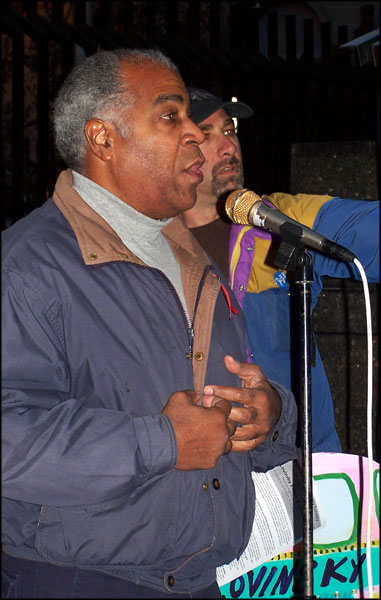 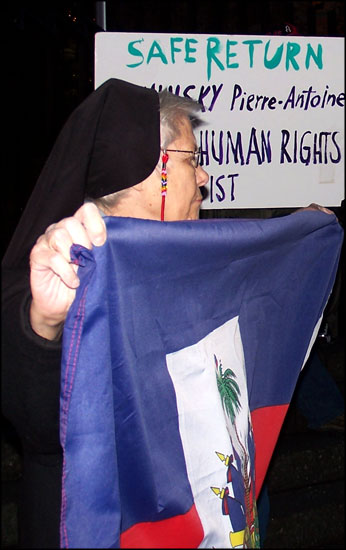 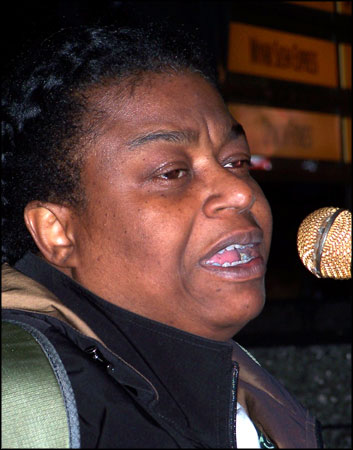 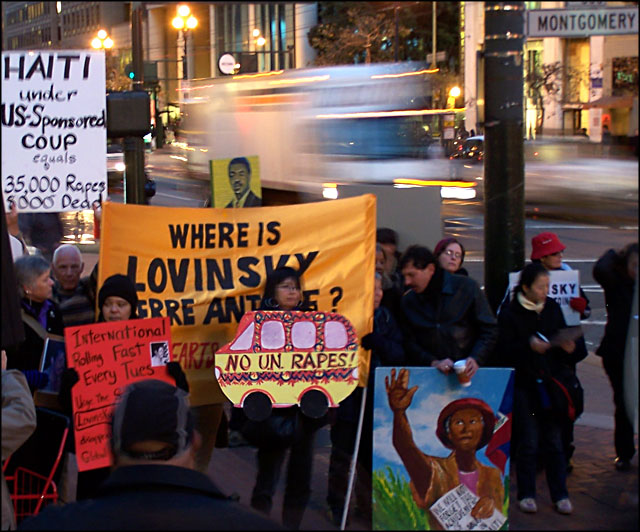 http://www.haitisolidarity.net/
Add Your Comments
LATEST COMMENTS ABOUT THIS ARTICLE
Listed below are the latest comments about this post.
These comments are submitted anonymously by website visitors.