Homelessness Policy in Fresno - A Kinder and Gentler Plan?

by Mike Rhodes (MikeRhodes [at] Comcast.net)
Fresno policy on homelessness is changing. This article describes what those changes are and looks at the dynamics that are motivating those changes. The article focuses on a meeting that took place on December 7, 2007. This public hearing included the mayor of Fresno, all Fresno City Council members, all but one member of the Board of Supervisors, and the executive director of the Bush administration’s Interagency Council on Homelessness, Philip Mangano. 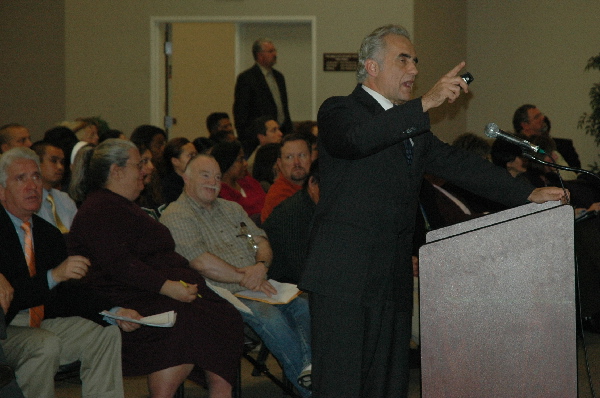 Homelessness Policy in Fresno - A Kinder and Gentler Plan?
By Mike Rhodes

A new policy, one that will treat homeless people with more dignity and respect, is being considered by elected officials from the City and County of Fresno. These changes, if they are approved, are expected to include converting unused buildings in the downtown area into decent and affordable housing for the homeless. This new policy would be a significant and strategic shift from previous policies that included bulldozing homeless encampments, passing quality of life ordinances, and forcing people into unheated tool sheds. Advocates of this new policy say that providing affordable and decent housing to the homeless is a part of a national trend that is making the social service/shelter model (like the Rescue Mission and Poverello House) obsolete.

There are powerful economic interests and harsh realities driving this change of policy. By every objective measurement, the policy that the City of Fresno pursued was a failure. The police and other city agencies were simply not able to eliminate the homeless in Fresno by harassing them, making their lives so miserable that they left town, got off the streets, or died. It was not for a lack of trying that these draconian policies against the homeless failed. In the end, the result has been increased homelessness and a more visible homeless population than when these policies began.

The City of Fresno’s policy of bulldozing homeless encampments led to a lawsuit that forced the city to stop taking and immediately destroying homeless peoples property. It got so bad, that in November 2006, the city had to be reminded by a federal judge to uphold the constitution of the United States. A trial in that case is expected to begin next summer. The city has also received nationwide attention critical of its ruthless policies against the homeless.

In the end, it does not appear that the negative publicity, homeless advocates, or the lawsuit created enough pressure to change public policy. While those actions played a role, the tipping point seems to have come as a result of the economic re-development in the downtown area led by Forest City Enterprises Inc. Forest City has exclusive rights to redevelop the southern section of downtown Fresno and plans to carry out this development in three phases. Without a solution to the massive number of homeless people in that section of downtown, Forest City simply would not move ahead with re-development.

It is in this context that City of Fresno elected officials asked the Board of Supervisors to discuss the issue of homelessness. City officials believe that a partnership with the county is a critical component in bringing in outside funding to address this issue. A rare meeting between city and county officials finally took place on December 7, 2007. This meeting included the mayor of Fresno, all Fresno City Council members, all but one member of the Board of Supervisors, and the executive director of the Bush administration’s Interagency Council on Homelessness, Philip Mangano.

Mangano presented the Housing First model that seeks to provide decent and affordable housing to the homeless. He said that providing housing for the homeless is less expensive than the current “shelter model” used in cities like Fresno and it has better success at reducing homelessness. Mangano cited a study in San Diego where “after they had expended three million dollars on 15 people at the end of 18 months those same 15 people were in the same condition and situation that they were at the beginning of the 18 months. They were on the same streets, the same street corners, same doorways and more importantly ready to randomly ricochet through those very expensive systems once again.” Mangano said that the City of San Diego could have provided these homeless people with luxury condo’s on beachfront property and spent less money.

The reason, according to Mangano, that it is so expensive to maintain the current system is that the city and county has to pay for emergency medical services, police, sanitation, food, shelter, and other services for homeless people. He said that “by providing them with permanent supportive housing you can actually achieve cost savings.” The cost/benefit analysis was clearly a major selling point for the Housing First program and Mangano returned to that theme time and again.

“In the cost studies that have been done around the country, the range of chronically homeless people going through those expensive health and law enforcement systems ranges from $35,000 - $150,000 per year per person. The cost of providing housing, a room, or an efficiency apartment with support services is between $13,000 - $25,000. So, for public policy makers, the choice is an obvious one. We can pay a lot to have people continue to be homeless and randomly ricocheting through expensive systems or we can pay much less to actually solve the problem by providing permanent and supportive housing,” Mangano said.

In a warning to local elected officials who might have missed the theme of his talk, Mangano quoted Albert Einstein as saying “the very definition of insanity was doing the same thing over and over and over again expecting a different result.” Mangano said that quote by Einstein “characterizes what we did with homelessness for twenty years. Now we are choosing in this country a Ten Year Plan to do things in a completely different way and to frame the effort in a business frame.”

Mangano spoke about the success of the national Ten Year Plans to end homelessness. He said “Portland Oregon has had a 70% decrease in chronic homelessness in the three years they have been implementing their 10 year plan.” Portland was on the mind of City Council member Larry Westerlund earlier in the week when he talked to me about the city’s new direction in its homeless policy. Westerlund spoke highly of Portland’s Central City Concern project that has revitalized downtown with housing for the homeless and social services to address their many needs. He said he would like to see Fresno do something similar.

As described at the December 7 meeting, Housing First is essentially a plan to get chronically homeless people off the streets and into decent housing. After their housing situation is stabilized they are provided with the opportunity to address the issues that led to their homelessness in the first place. That could mean getting job training, mental health services, or help in addressing drug or alcohol addiction. Housing First is an integrated program that first provides a homeless person with a decent place to live and then helps them improve the quality of their life be offering social services.

Mangano, in closing quoted Dr. Martin Luther King who said “the long moral arc of history, of the American experience bends toward justice.” Mangano said “the Ten Year Plan we will be creating here in Fresno is your entire community reaching out together, your arms uniting up to that arc of history to bend that arc into the lives of your poorest citizens so that every citizen of your city and county will be known by a single name - neighbor - and treated as one and provided with the opportunity as one and the resources as one not to leave any neighbor outside on the street or languishing in a shelter.” That, he said, is the goal of the Ten Year Plan.

At the conclusion of the public hearing both the City Council and Board of Supervisors passed a resolution in support of the development of a Ten Year Plan. Both bodies agreed to direct staff to bring together the stakeholders on the homelessness issue and begin this work in early January 2008.

If successful, the new city/county plan will accomplish multiple goals. Forest City will proceed with the mixed use re-development of downtown, older unused buildings will be converted into housing for the homeless, and people who are homeless will be housed and treated with the dignity and respect they deserve.

This will be a wonderful event to benefit homelessness among women and children. Margaret Hudson’s Gallery is located at 1936 E. Swift Ave near Ashlan and 41. Coming off 41 take the Ashlan exit going west and your first right on Effie. Then make another right on Swift Ave.

Local artists will be displaying and selling art for this cause bringing the art to the backyard where hot refreshments will be served. Live art and a vigil for Pamela Kincaid will also be present. Margaret will have a beautiful display in her gallery and studio. Desert will also be served in the pottery studio. Contact information: Cynthia 559 709 2263 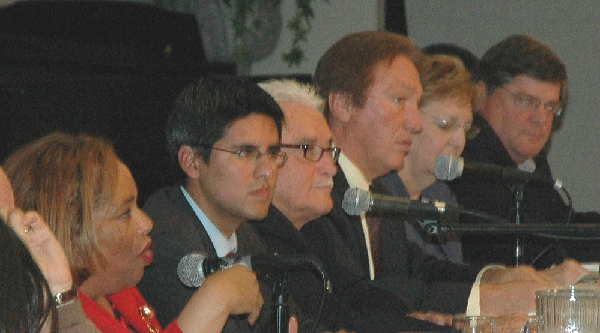 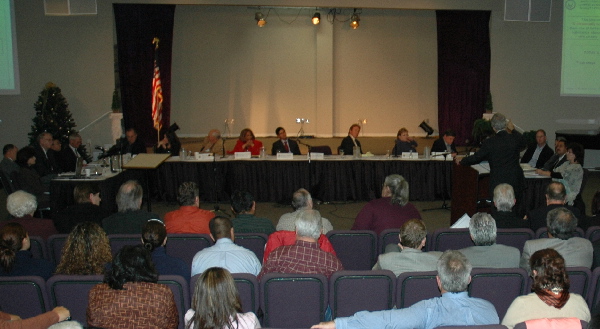 There were about 150 people that attended the December 7 public hearing.
END_OF_DOCUMENT_TOKEN_TO_BE_REPLACED
§Al Williams
by Mike Rhodes 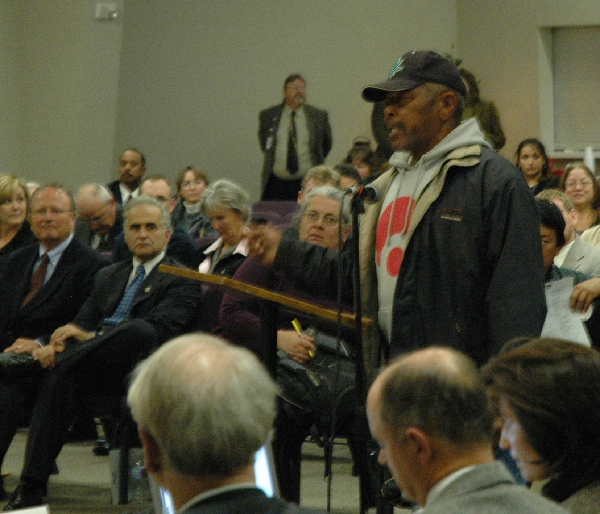 Al Williams is a homeless man who lives in the Roeding Park area. Al told me he is not sure if he wants to wait ten years to implement a plan to end homelessness. Al says he would like a job that pays a living wage NOW.

END_OF_DOCUMENT_TOKEN_TO_BE_REPLACED
Add Your Comments
Support Independent Media
We are 100% volunteer and depend on your participation to sustain our efforts!