Add an Event
Newswire
Calendar
Features
Home
Donate
From the Open-Publishing Calendar
From the Open-Publishing Newswire
Indybay Feature
Publish to Newswire
Add an Event
Related Categories: U.S. | Global Justice & Anti-Capitalism | Government & Elections
Regional organizing against the 2008 political conventions grows
by via baltimore imc
Thursday Dec 13th, 2007 12:55 PM
With the failure of the Democratic Congress to meaningfully challenge the Bush administration's agenda painfully apparent, renewed interest in direct action against the spectacular machinations of the political process itself has been growing across the country. 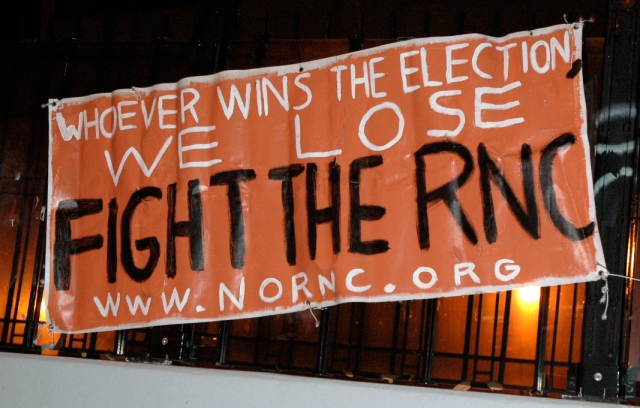 original image (1067x681)
Activists in Denver and Minneapolis/St. Paul are busy preparing for mass mobilizations against the 2008 Democratic and Republican National Conventions. In the Baltimore area, a few signs expressing support for protest against the RNC have been spotted, including this one at MICA and this banner off I-83, which has stayed up for more than a week. More substantial regional activity against both conventions will be happening on January 26th and 27th in Frederick, MD, during a regional Anti-RNC/DNC consulta.