The date of her headquarters opening coincided with the date John Lennon was assassinated in New York 27 years ago. Lennon's widow, Yoko Ono, hoped his passing would be remembered by people everywhere imagining a world of Peace and Love. 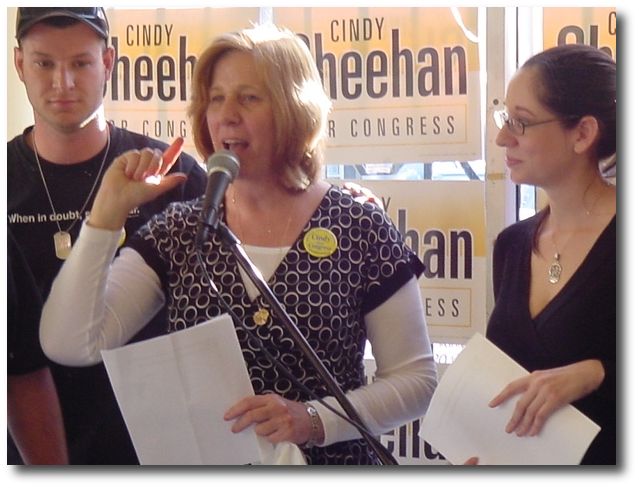 Except for a short factual broadcast by Don Knapp of local television station KPIX Channel 5, Cindy Sheehan's official opening of her new campaign headquarters in San Francisco yesterday was virtually ignored by the establishment media. There was no coverage in the San Francisco Chronicle. If one searches "Cindy Sheehan" from Google's news page and glances over the search offerings, one might even get the impression that Cindy had given up her activism. But it isn't so. Far from it.

Especially since yesterday afternoon-- when many friends and supporters met Cindy and her surviving children (her son, Casey, was killed in Iraq) at 1260 Mission Street in San Francisco. There, Cindy addressed the issues that spurred her to directly challenge California District 8 Congressional incumbent Nancy Pelosi, considered by many as the third most powerful person in America today behind George W. Bush and Richard Cheney.

Pelosi has famously vowed to "keep impeachment off the table," and has disappointed most of her constituents and many people around the nation for not helping bring an end to America's involvement in Iraq. The Washington Post reported yesterday that under Pelosi's "leadership" Democrats will have for the third time since they took control of Congress failed to force Bush to change course in Iraq. Tomorrow, they plan to give Bush a half-trillion-dollar spending package that will include billions of dollars for the war in Iraq without timelines for the withdrawal of combat forces. http://tinyurl.com/2jj7y5

During Cindy Sheehan's Campaign Headquarters Open House, Cindy expressed her contempt for such measures which suggest that the Democrats are colluding with the Bush administration and not presenting a true opposition that reflects the will of the people-- particularly in San Francisco where Cindy is now running as an independent. She also expressed her desire to implement healthy changes which will begin by bringing American troops home from a war that is universally known today as having been founded on lies.
END_OF_DOCUMENT_TOKEN_TO_BE_REPLACED
§Readers of the San Francisco Chronicle know nothing about yesterday's event
by Robert B. Livingston 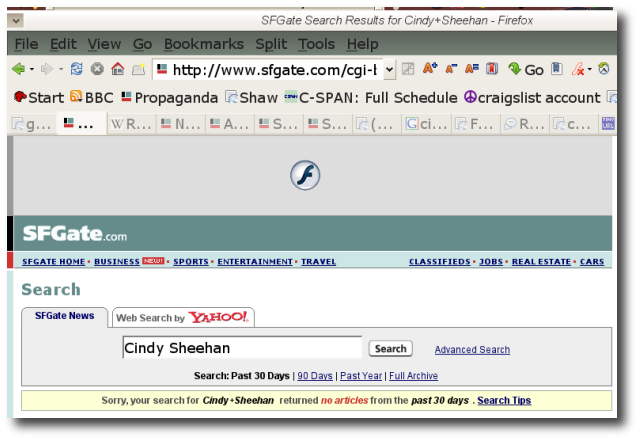 This is a screenshot I took about 9 am this morning to show what a search of the San Francisco Chronicle's web portal archive turns up when one searches for news about Cindy Sheehan.
END_OF_DOCUMENT_TOKEN_TO_BE_REPLACED
§Cindy Sheehan and volunteers about a month ago
by Robert B. Livingston 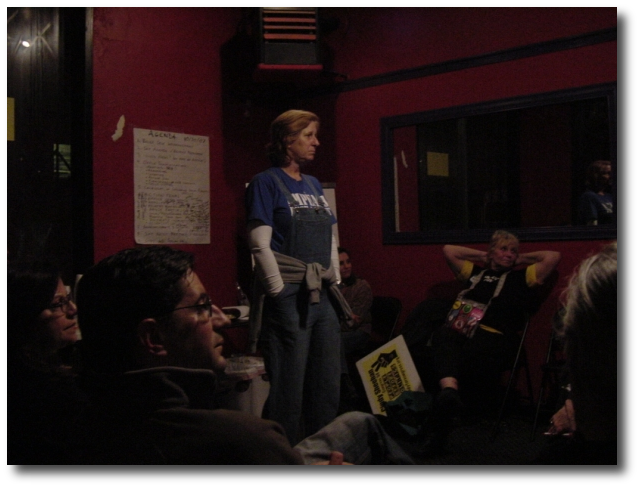 About a month ago, Cindy Sheehan and volunteers take stock of the dismal interior of 1260 Mission (once a seedy adult night club in a run-down neighborhood), where she will have her campaign headquarters.
END_OF_DOCUMENT_TOKEN_TO_BE_REPLACED
§Only days ago volunteers make final touches for Cindy's Open House
by Robert B. Livingston 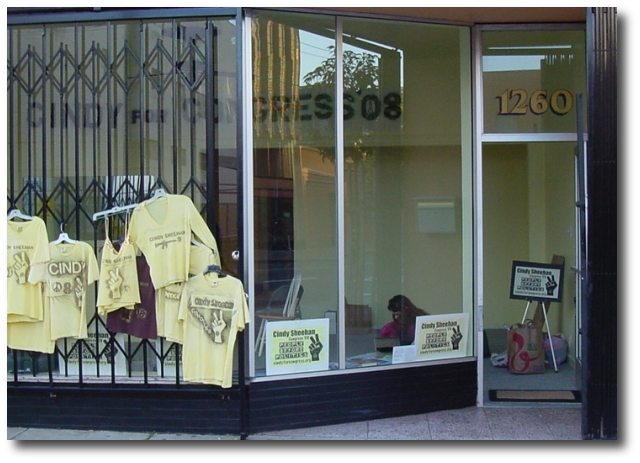 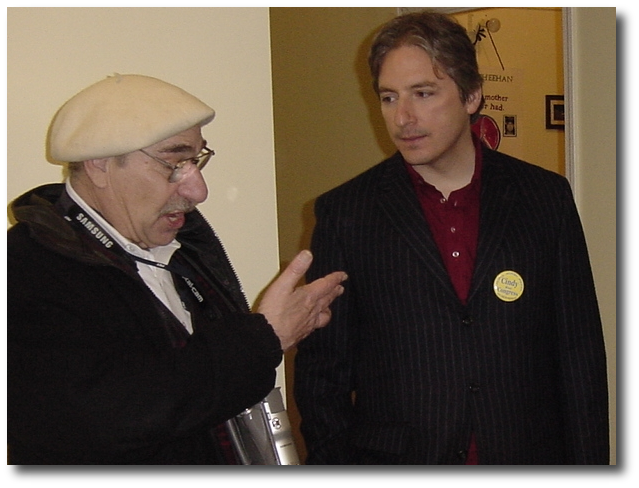 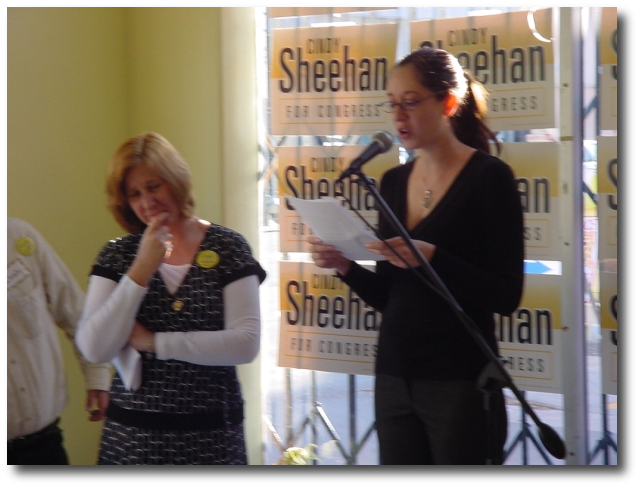 Cindy Sheehan chokes back emotion as her daughter Carly reads her poem "A Nation Rocked to Sleep". http://tinyurl.com/5xq5r
END_OF_DOCUMENT_TOKEN_TO_BE_REPLACED
§Barry Hermanson wipes away tears as he listens to Carly's poem about her brother Casey
by Robert B. Livingston 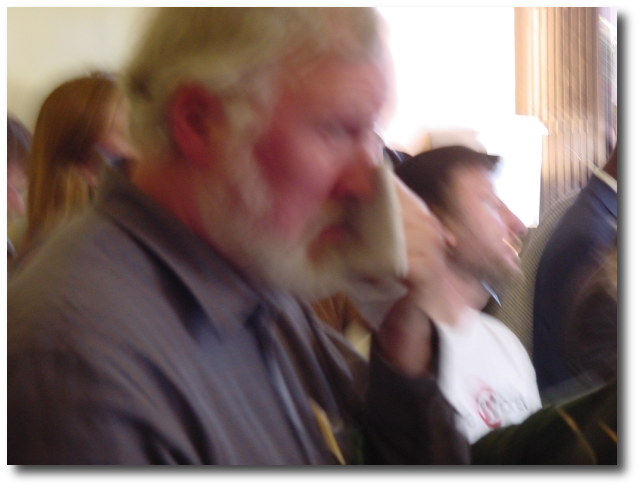 The Green Party activist and working person's advocate is running for Congress in California's 12th District. Hermanson's efforts helped make San Francisco's minimum wage one of the highest in the nation.
http://www.barryhermanson.org/
END_OF_DOCUMENT_TOKEN_TO_BE_REPLACED
§Having reached a new milestone, Cindy Sheehan beams with pride
by Robert B. Livingston 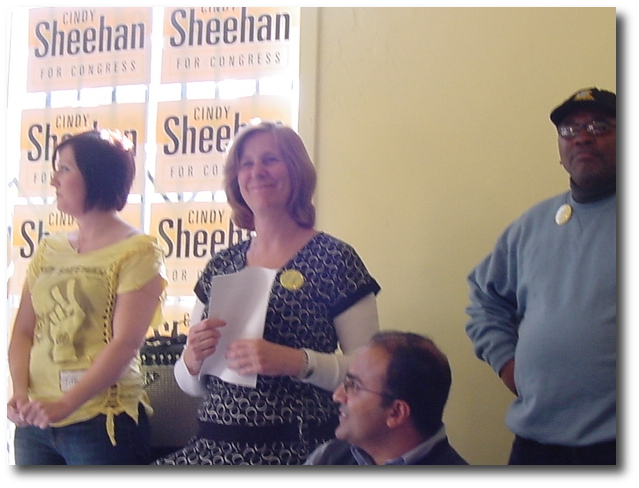 Looking at her transformed headquarters crowded with devoted volunteers, family, and friends, Cindy Sheehan reflects on how much has been accomplished in such a short time... and how feasible and productive her independent campaign has already become.
END_OF_DOCUMENT_TOKEN_TO_BE_REPLACED
§War Is Over!
by Robert B. Livingston 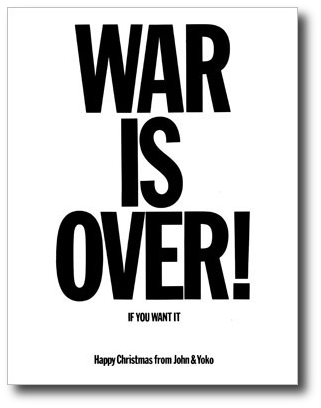 What was once in a previous incarnation a dingy nondescript "clip joint" that preyed on people's weaknesses has been transformed into a lovely office devoted to implementing productive and practical political change.

Now, if only people can imagine what Cindy can do if she is elected, and support her with real efforts, maybe the "clip joint" that is modern day Washington D.C. can be transformed as quickly.

In rememberance of John Lennon, here is Yoko Ono's website:
http://www.imaginepeace.com/
END_OF_DOCUMENT_TOKEN_TO_BE_REPLACED
Add Your Comments
Latest Comments
Listed below are the latest comments about this post.
These comments are submitted anonymously by website visitors.
TITLE
AUTHOR
DATE
Cindy For Congress
Link to James Lesley Video
Open Letter to the Antiwar Left: Why Ron Paul's Campaign Deserves Our Attention
Joshua Frank (excerpt and link)
Ron Paul
Jeanette Doney
No Union leaders present
Teddy Diaz
"People Befor Politics", POWER TO THE PEOPLE !
Idriss Stelley Foundation
Support Independent Media
We are 100% volunteer and depend on your participation to sustain our efforts!