by Mike Rhodes (MikeRhodes [at] Comcast.net)
The City of Fresno cleaned-up a large homeless encampment today. It turned out better than most people expected. 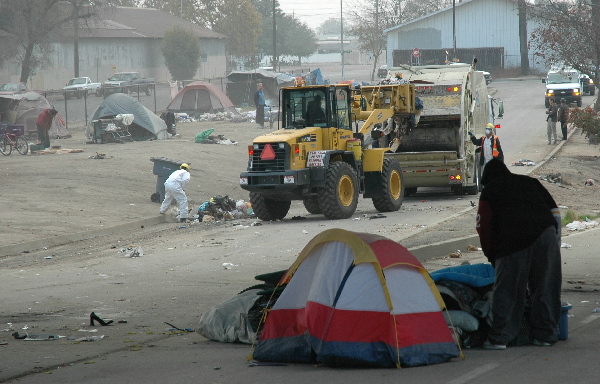 Several residents of the G street homeless encampment (The Hill) joined City of Fresno sanitation workers as they cleaned up the area this morning. Until a couple of days ago, everyone expected the clean up to include the confiscation of homeless peoples property and the eviction of all residents. People living on The Hill were relieved to learn that it was not the intention of the city to evict them from this encampment. Emails from Assistant City Manager Bruce Rudd and City Council member Cynthia Sterling’s assistant Gregory Barfield made it clear that the intention of the clean up was not to clear the encampment of residents. City Sanitation Department head Philip Withers told me when he arrived this morning that they were just going to clean up the trash.

The trash, as you can see in the photo below, was everywhere and there were a couple of large piles. Rats and other vermin are known to live in the garbage piles. I asked Withers why City Sanitation did not bring out a dumpster and remove the trash on a regular basis. It seems to me that the garbage is a community health hazzard and that removing it on a regular basis would be better public policy and less expensive than periodically bringing in large crews of city workers. Withers said that the decision was not his and this was something that I should take up with the City Council.

The City of Fresno has set up trash bins at another homeless encampment a short distance from The Hill. That encampment, which the residents call New Jack City, has a trash bin and portable toilets. There is also a security guard on duty 24 hours a day/7 days a week to keep an eye on the toilets and trash bin (not the homeless people). This costs taxpayers about $13,000 a month. See: http://www.indybay.org/newsitems/2007/05/17/18417798.php

Al Williams, who is homeless and lives in the Roeding Park area, filmed today’s clean up for the Community Alliance newspaper. Williams suggested that he thought it would be less expensive for the city to set up a trash bin at The Hill and if they absolutely have to have security - hire some of the homeless people who can use the income. Williams said homeless people could be hired to not only keep an eye on the area, but clean up too. He asked me why the city had not thought of that.

The police had a very low profile at today’s clean up. The only officer I saw was Rey Wallace and he was not in uniform. Officer Wallace was the person who developed the policy of taking and destroying homeless peoples property. This policy led to a lawsuit against the city. For more details about the lawsuit, see: http://www.indybay.org/newsitems/2006/10/17/18321050.php . The lawsuit is expected to go to trial in June of 2008.

Rudd had indicated at a City Council meeting that after they established a Tool Shed City for the homeless at the Poverello House they would start clearing out the homeless encampments in the downtown area. He said they would start with The Hill. Nobody, including Rudd, expected the tool sheds to fill up, but they did. There is even a waiting list of people who want to get into the tool sheds, even though they have no heating, cooling, electricity, or toilets. For more information about the establishment of Tool Shed City, see: http://www.indybay.org/newsitems/2007/11/17/18461880.php . It made less sense to evict people from The Hill without anyplace for them to go. They would simply be displaced from one place to another. Not, that displacing homeless people without giving them a decent place to go has ever stopped the City of Fresno before. For example, see:

Fresno has, according to City of Fresno documents, over 8,000 homeless residents. There are some homeless people and advocates who are optimistic that city officials are beginning to move policy in a new direction. There have been improvements - like the portable toilets and trash bins at one encampment. The City of Fresno has also stopped taking and destroying homeless peoples property. Yes, it took a court order to get them to do that, but there are indications that they are doing their best to comply with the preliminary injunction. It was also a positive development that they did not evict the residents of The Hill today.

On December 7 there will be a major meeting between the City and County of Fresno elected officials to look at long term plans on how to address the homeless issue. Most elected officials now recognize the importance of developing a long term strategy and are open to new ideas. Will providing homeless people with decent affordable housing, jobs that pay a living wage, universal health care be on the agenda? While the answer to that question is not clear, one thing that is certain is that homeless advocates will be encouraging as many homeless people as possible to attend the December 7 meeting. Since it is homeless peoples future that will be discussed - they should have a place at the table.
END_OF_DOCUMENT_TOKEN_TO_BE_REPLACED
§Lots of Trash
by Mike Rhodes 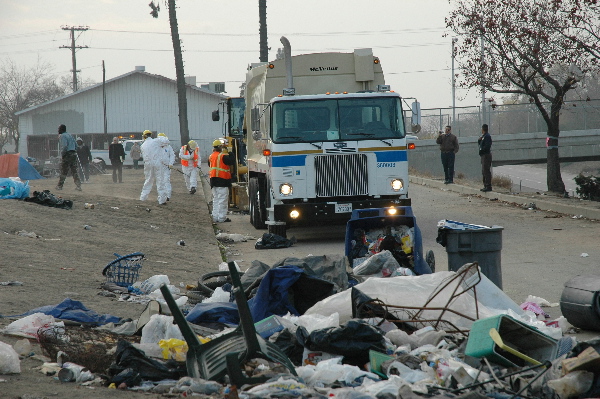 Large piles of trash were cleaned up today.
END_OF_DOCUMENT_TOKEN_TO_BE_REPLACED
§Top of the Hill
by Mike Rhodes 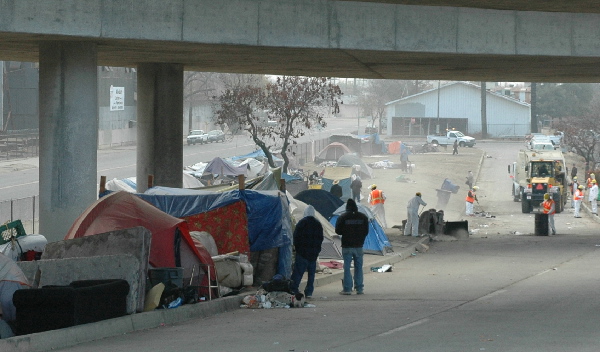 This is a view from the top of the hill.
END_OF_DOCUMENT_TOKEN_TO_BE_REPLACED
§Clean-up
by Mike Rhodes 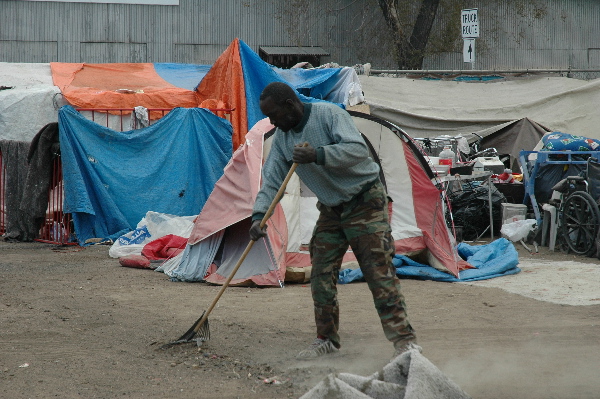 Some homeless residents of The Hill helped in the clean-up. Photos by Mike Rhodes
END_OF_DOCUMENT_TOKEN_TO_BE_REPLACED
Add Your Comments
Support Independent Media
We are 100% volunteer and depend on your participation to sustain our efforts!