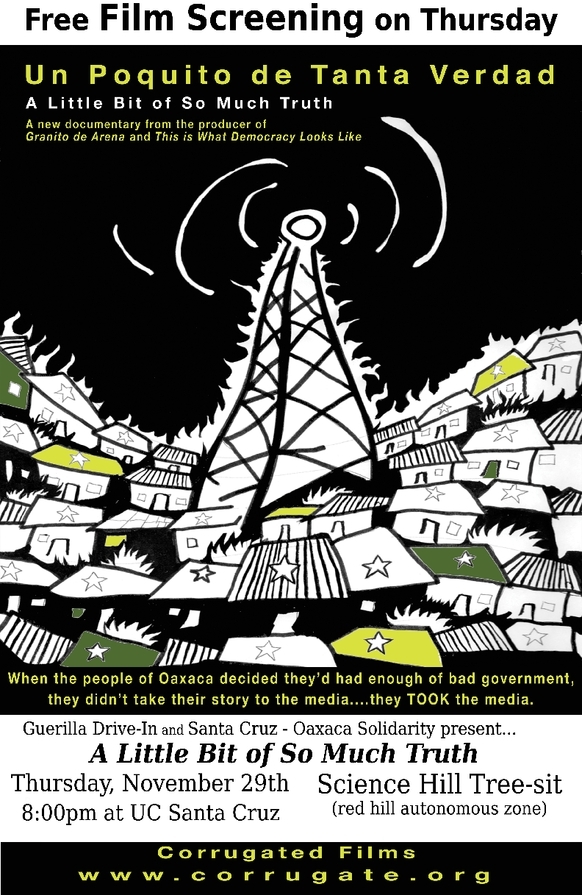 Download PDF (10.8MB)
When the people of Oaxaca decided they'd had enough of bad government, they didn't take their story to the media... They TOOK the media

In the summer of 2006, a broad-based, non-violent, popular uprising exploded in the southern Mexican state of Oaxaca. Some compared it to the Paris Commune, while others called it the first Latin American revolution of the 21st century.

But it was the people’s use of the media that truly made history in Oaxaca. A 90-minute documentary, A Little Bit of So Much Truth captures the unprecedented media phenomenon that emerged when tens of thousands of school teachers, housewives, indigenous communities, health workers, farmers, and students took 14 radio stations and one TV station into their own hands, using them to organize, mobilize, and ultimately defend their grassroots struggle for social, cultural, and economic justice.

"Beautiful, powerful, dramatic... magnificent... provides a remarkably deep and penetrating look into the people who made up the movement. Everyone interested in Mexico, in teachers and education, in workers' movements, in indigenous people, in the state of our world and the struggle for social justice should see the video."
Mexican Labor News and Analysis