Is Mayor Autry Above the Law?

by Mike Rhodes (MikeRhodes [at] Comcast.net)
The City of Fresno will open a Tool Shed City for homeless people at the Poverello House on Monday, November 18. Homeless advocates and many homeless people have concerns that the tool sheds, which do not have heating, cooling, running water, electricity, or toilets are not adequate housing. They would like to see some of the abandoned buildings in downtown converted into housing for the homeless. 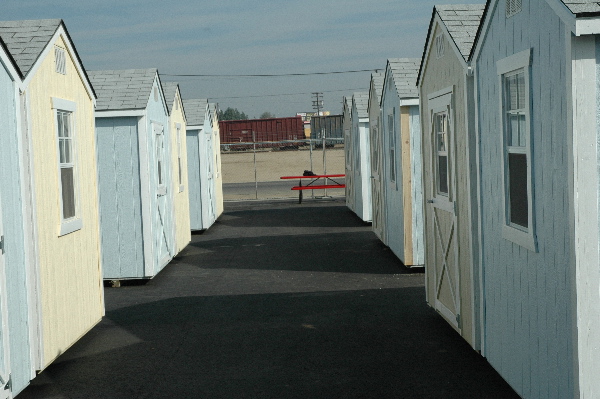 Is Mayor Autry Above the Law?
Tool shed city for the homeless will open on Monday

Last Thursday, Fresno mayor Alan Autry announced the opening of a new Tool Shed City for the homeless. The tool sheds are at the Poverello House , a social service agency for the homeless that operates in downtown Fresno. The mayor said the sheds will provide safe, clean sleeping quarters and access to essential resources for our homeless residents, but homeless advocates are concerned that the facilities do not have heating, cooling, running water, or indoor plumbing.

At a press conference held last Thursday, I asked the mayor about the legality of the tool sheds. I said "if I had one of these tool sheds in my backyard and put my mother in law in it, I would probably get a citation and fine." I might even get arrested for elder abuse. I mentioned that I know of an instance where a man was providing shelter for a homeless person in his back yard - the trailer had heating, cooling, running water, and a toilet, but the city’s code enforcement team forced him to evict the person living in the trailer. That person is now homeless and living on the streets of Fresno. How can the city set up tool sheds that are not as good as that person’s trailer and not be in violation of city codes? Isn’t this a double standard? The mayor said "if we look at this with all this paralysis of analysis through these cross comparisons of this or that and the theater of the absurd, we’re not going to get anyone out from under the overpass (homeless people living in New Jack City)." He never answered the question, which was whether the mayor and City of Fresno was above the law.

Cynthia Greene, who filmed the press conference for the Community Alliance newspaper, asked the mayor "are the homeless people that don’t want to move into Tool Sheds going to be forced to move into them?" Greene is homeless and lives on The Hill, which is a homeless encampment that the City Manager’s office has identified as the first target of a "clean up" after the Tool Shed City is established. Autry said "nobody is going to be forced to do anything except obey the law."

Autry was asked about the Camping Ordinance the City Manager’s office has proposed which would make it illegal for homeless people to sleep outdoors at night. The mayor said "we will address homelessness in a very compassionate and effective way." He did not rule out his support for a camping ordinance that could be used to force homeless people into the tool sheds. See: http://www.indybay.org/newsitems/2007/10/02/18451441.php for background on the city’s strategy to use the tool sheds to force the homeless out of other encampments.

Speaking in support of the tool sheds, Big Sue who is homeless, said "I’m number one on the list to be in the sheds." At the press conference she said "I want to be a part of Fresno coming together . . . we need a solution to deal with the homeless problem." Big Sue is not the only person in the homeless community that supports the tool sheds. Randy Johnson, one of the named plaintiffs in the lawsuit against the City of Fresno (see http://www.indybay.org/newsitems/2006/11/23/18332519.php ), is currently living in a tool shed in the Village of Hope, which is also located at the Poverello House. Johnson says the tool shed provides him with a better place to live than when he was at New Jack City.

Arnold Sanchez is also hoping to get into the tool sheds. Sanchez was caught up in a city "clean up" last week and was forced to move. He was living in a tent in front of the Poverello House. A notice, posted about 10 days ago, said the city had "received complaints concerning individuals who are loitering near or residing in temporary shelters that have been constructed in the vicinity of Santa Clara and E street." Sanchez said he talked to the neighbors and they did not have a problem with him living there. "I think they forced us out because Mr. Autry thinks we are an eyesore." But Sanchez is not sure if he will be allowed into one of the tool sheds because he has had a run in with one of the Poverello House employees. Sanchez says he thinks he has "rubbed this person the wrong way. If I don’t get a place that will be why."

Paul Stack, Operations Director for the Poverello House, told me that all people have to do to get into a tool shed is agree to follow the rules. Stack said "any person that agrees to follow the rules will be given a place to stay." Jim Connell, Executive Director of the Poverello House said there will be two people per shed. He said the rules will be minimal, "we will not allow alcohol or drug use inside the compound, we will be opening in the evening at about 4:30 PM for you to come in, you can stay all night, and then we will be securing peoples property at around 8 AM. You will be able to store your property in the shed." Residents of tool shed city will be locked out from 8 AM - 4:30 PM.

Asked about long term solutions for the homeless in Fresno, mayor Autry was vague. He said "we are looking at the root causes of homelessness and how to get people well. We believe that concentrating on the percentage that can be productive, those that maybe have some mental health issues and could be treated with medication - I don’t believe and experts don’t believe that medication is getting to the homeless in the atmosphere and circumstances that will allow them to get well. We need to address that. The ones that are the tougher cases, the ones that require food and shelter and the basics like we want to provide, we will do that for as long as it takes. We have a responsibility to look out in some way for those who can’t help themselves."

I asked "is there a long term plan that goes beyond the tool sheds?" The mayor said "absolutely, we are looking for long term housing solutions that are not only good for addressing the homeless situation, but also can co-exist with the realities of developing our downtown."

Autry said that he was not happy with the situation. "Am I happy that I’m in my seventh year and we are just doing this short term relief? No. I have failed in that regard. So, I’m not going to give you a bunch of political double speak. We are all learning about this and we have to realize that the measure of the city, to a great degree, is how you treat your most vulnerable."

While there is no clear answer about whether a legal challenge will arise or not, everyone does seem to agree that the tool sheds are not a long term solution. If the City of Fresno moves in the direction of renovating some of the abandoned buildings into affordable and adequate housing for the homeless, that would be one thing. But, if these tool sheds become a permanent fixture, if more are built, and if homeless people are forced into them, then litigation is likely. If that happens, the question of whether the mayor and City of Fresno is required to comply with the same laws (building codes, ADA, etc) as city residents will probably be put to the test in a court of law. 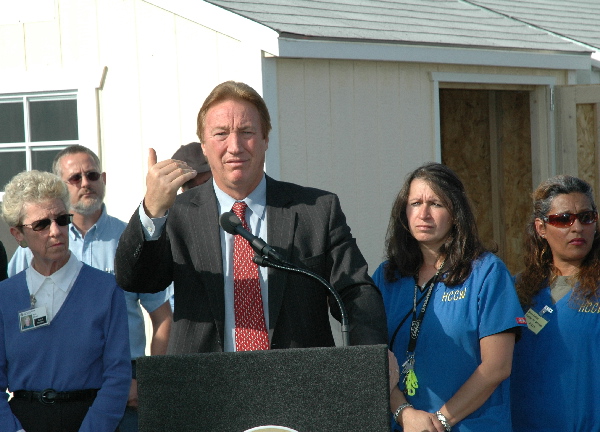 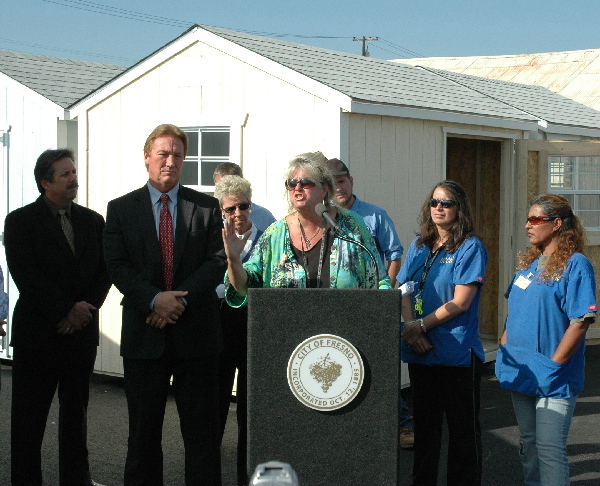 Big Sue endorsed the mayor’s plan and said she will live in one of the tool sheds.
END_OF_DOCUMENT_TOKEN_TO_BE_REPLACED
§Arnold Sanchez
by Mike Rhodes 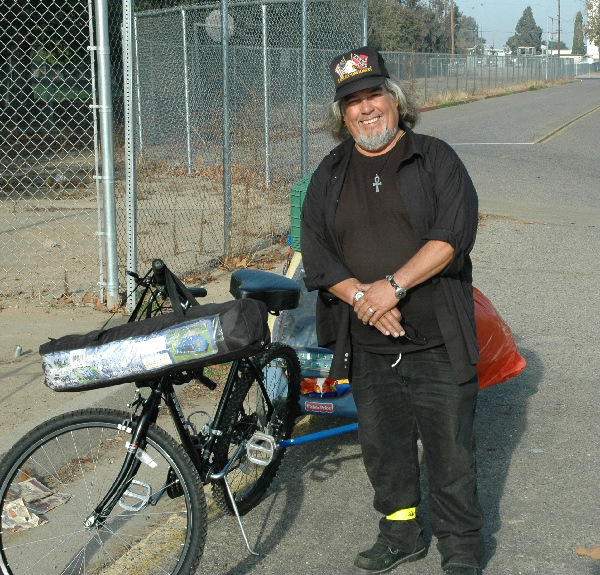 Arnold is hoping he will be accepted so he can move into a tool shed.
END_OF_DOCUMENT_TOKEN_TO_BE_REPLACED
§Site of Last Thursday’s “Clean Up”
by Mike Rhodes 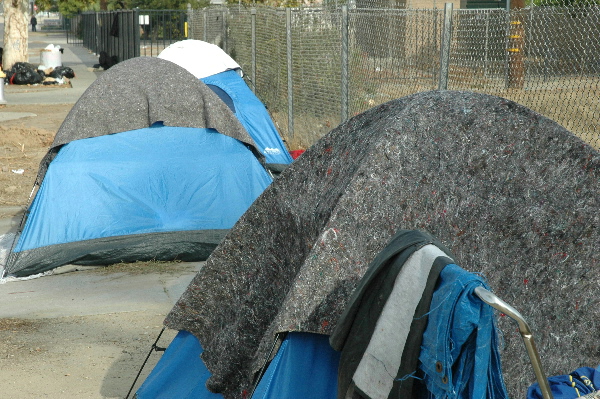 These three tents were the focus of a “clean up” by a city crew last Thursday. The city put up notices, brought in a 8 x 8 x 20 foot container, work crew, garbage truck, and police to evict the people living in these three tents.
END_OF_DOCUMENT_TOKEN_TO_BE_REPLACED
§Cynthia Greene
by Mike Rhodes 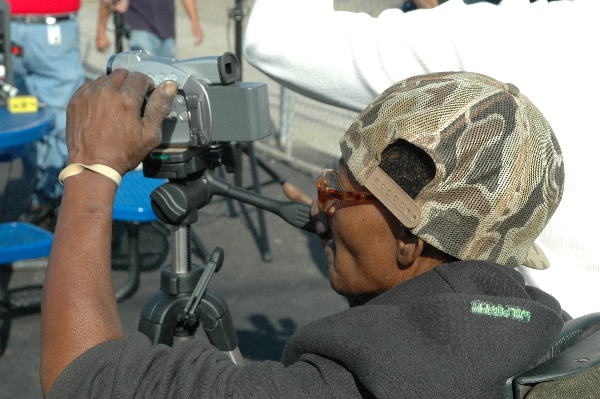 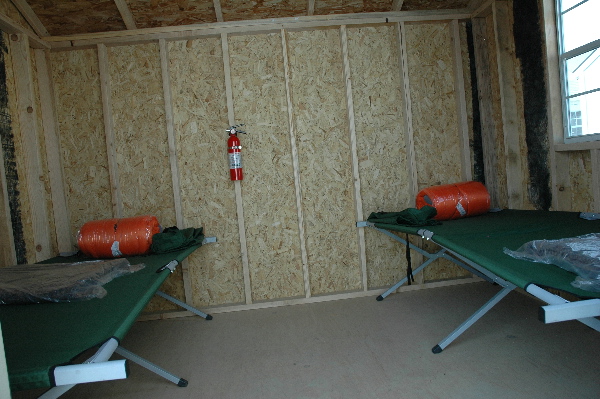 All photos by Mike Rhodes
END_OF_DOCUMENT_TOKEN_TO_BE_REPLACED
Add Your Comments
Latest Comments
Listed below are the latest comments about this post.
These comments are submitted anonymously by website visitors.
TITLE
AUTHOR
DATE
Shameful, Shameful, Shameful
Ann
Tool Shed City
Kiel Famellos-Schmidt
Support Independent Media
We are 100% volunteer and depend on your participation to sustain our efforts!