Among the visitors over the holiday weekend were Mayor Emily Reilly and her husband, Robert Nahas. After touring the liberated space under the trees, the mayor called the site "inspirational" and said that she would donate food from her bakery to the activists.

Many of UCSC's in-town neighbors have visited the site, bringing extra blankets and food, showing their children the platforms high in the redwoods or just thanking the activists for their show of opposition. UCSC shuttle drivers consistently honk their horns when they drive by the site and are greeted by cheers and waves from the activists.

Monday night, local DIY film collective Guerilla Drive-In hosted a showing of "Sir, No Sir," a movie about GI resistance during the Vietnam War. The film was shown on a sheet at the base of one of the redwood clusters.

On Tuesday, as school resumed, faculty members came by to show their support. An art class convened at the base of the trees for a drawing assignment. Faculty members also assured the activists that they did not support the UC police departments use of force at last Wednesday's protest.

Tuesday night, local pop band James Rabbit entertained the crowd. The show was followed by a poetry reading that included a tree-sitter shouting a Rimbaud poem from their redwood perch.

Chancellor Blumenthal stated at a meeting of the Academic Senate on Friday that the administration "will take whatever actions necessary to move forward" with the construction of the proposed Biomedical Sciences facility at the student-occupied site. But protesters have vowed to remain at the space until UCSC drops its plans to add 4,500 more students and destroy 120 acres of forest. When asked about the possibility of the administration using riot cops to evict the protesters, tree-sit media spokesperson Jennifer Charles said "we have so much community support on our side; it would be a public relations nightmare for the university if they were to use violence against us again." 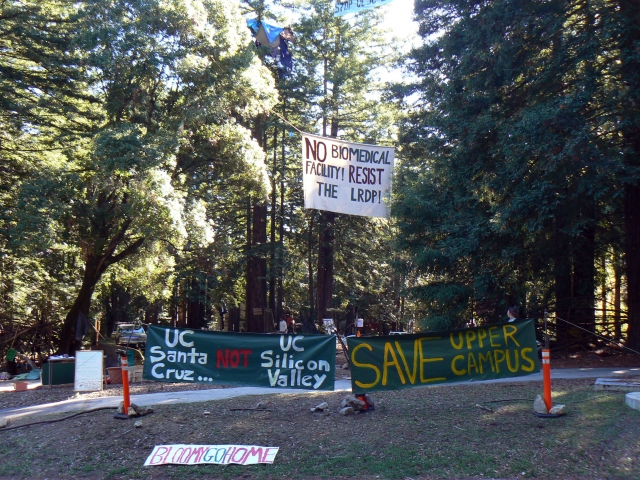 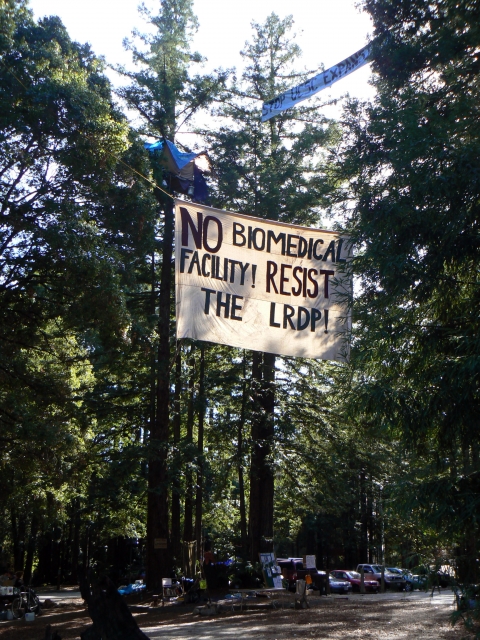 original image (2112x2816)
Add Your Comments
LATEST COMMENTS ABOUT THIS ARTICLE
Listed below are the latest comments about this post.
These comments are submitted anonymously by website visitors.