by Mike Rhodes (MikeRhodes [at] Comcast.net)
Homeless people design some creative living spaces in Fresno, only to have them bulldozed by the city. The city would prefer the homeless to live in dog houses (er. . . I mean tool sheds) in a concentration camp. 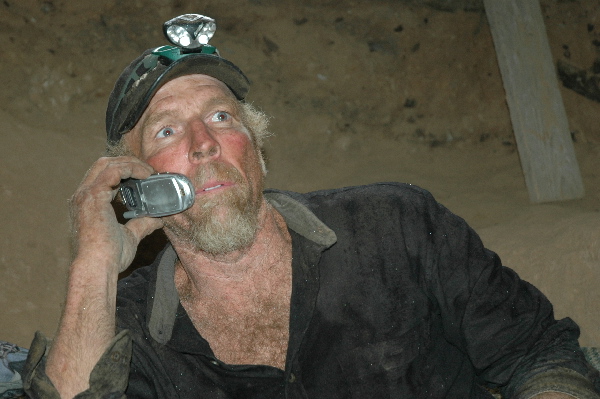 People who are homeless in Fresno build some interesting and creative shelters. Today I visited Bruce Tracy who has dug ten feet into the ground, creating a multi room shelter that keeps him cool in the summer and warm in the winter. Tracy’s home reminded me of the Forestiere Underground Gardens, located on Shaw avenue in north Fresno. Unlike the Forestiere Gardens, which is a local, state, and national historical landmark, the Fresno Police have told Tracy they plan to bulldoze his home.

Tracy said he has built a lot of these underground homes. "I have been doing this since I was fourteen," Tracy said. He credited his interest in underground living to a visit to the Forestiere gardens when he was a kid. Sitting in his home, on this rainy November day, Tracy said it took him about three months to dig out this home. "I dug it all out with a shovel and an axe."

About a week ago the Fresno Police Department found Tracy’s home, which is on public land (Caltrans) about a mile north of Roeding Park. Tracy said the police came in with guns drawn, searched the place, and forced him out in his underwear. He was forced to stand outside in his boxer shorts for 2 ½ hours while the police interrogated him. "They came back a couple of days ago and said I had to leave. They said they were going to bulldoze the place," Tracy said.

The City of Fresno and Caltrans have a preliminary injunction that prevents them from taking and immediately destroying homeless peoples property. They are, however, allowed to take and store the property. If the property is not claimed in 90 days the city and Caltrans can have the property destroyed. The City of Fresno Sanitation Department has one of these "clean ups" planned for Thursday, November 15 at 9 AM at Santa Clara and E street. Tracy does not have a specific date when the bulldozer will arrive at his home.

Tracy said that the Fresno Police Department took his property, which included a skill saw, last December and gave him no way to re-claim it. If true, this would be a violation of the court order.

The City of Fresno is in the process of building more tool sheds to put homeless people into. 44 new sheds are being installed at the Poverello House, which is a homeless service center in downtown Fresno. See the article, The City of Fresno’s New Plan to Eliminate the Homeless at: http://www.indybay.org/newsitems/2007/10/20/18454889.php for more information about the tool shed city.

The destruction of Tracy’s home follows a pattern by the city to eliminate homeless encampments and force people into what some people call concentration camps. John Everett called me about a week ago and told me his story. He said that he owns property near Roeding Park, had set up a couple of trailers on his land, and rented them out at very reasonable rates to people who were homeless. It gave people a reasonably nice place to stay, at a price they could afford and that everyone was happy with the arrangement. Everett said "code enforcement came in and shut me down. Everyone had to move back onto the streets."

The trailers Everett rented had heating, cooling, electricity, running water, and a toilet. The tool sheds the city are building don’t have heating or cooling, running water, and everyone shares a portable toilet. Everett said people could come and go as they pleased at his place but at the tool shed city at the Poverello House everyone is kicked out by 8 AM in the morning and can’t return until 5 PM. The tool sheds are costing the city $360,000 for the first year. Everett’s operation cost the taxpayers nothing. Tracy’s underground home cost the taxpayers nothing. Why is the City of Fresno destroying homeless encampments and forcing them to move into housing that violates building codes, is not as nice as what they had, and is costing taxpayers a significant amount of money?

I asked Bruce and his friend Thomas what they thought was behind the City of Fresno’s plan to move homeless people into tool sheds. "It’s all about control," Thomas said. "I got pulled over 45 times in 30 days" added Bruce. Bruce says homeless people are constantly harassed, "they just want to eliminate the homeless" by making life so hard that they move.

Bruce, who works as a carpenter and mechanic, said he does not want to spend his money on rent and live the consumer oriented lifestyle that most people take for granted. He takes no money from the government and would like to be left alone to live in peace."I’m self sustaining, self sufficient, and don’t get in trouble with the law. . . as much as I can."

Most homeless people live a much more communal life than most Fresno residents who live in suburbs or apartments. They know their neighbors and take time to talk with them everyday. While we were visiting Bruce, a friend came by to make sure he was alright. He had seen our car parked nearby. After Bruce assured his friend that everything was OK, he told me that the friend said he would keep an eye on our car to make sure nobody disturbed it. That what neighbors should do. They should look after each other, not bulldoze their homes. 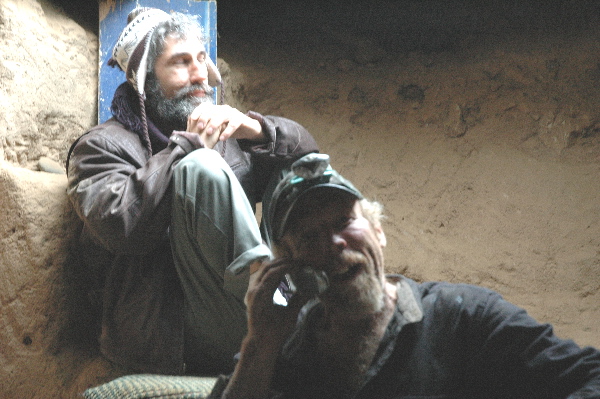 Bruce talks (live) to Pirate Radio http://www.freakradio.org/ in Santa Cruz about his underground home. That is his friend Thomas behind him. 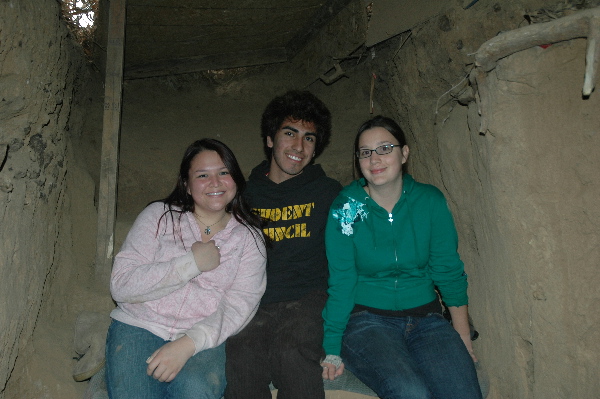 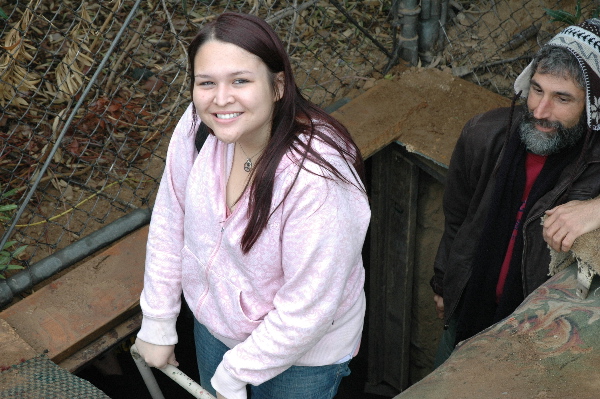 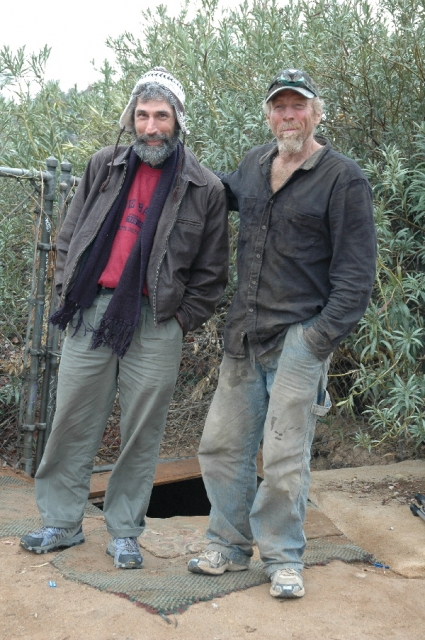 original image (600x902)
END_OF_DOCUMENT_TOKEN_TO_BE_REPLACED
Add Your Comments
Comments (Hide Comments)
§Another good story
by crudo
Another good story from Mike.
Add a Comment
§Article on Bruce Tracy
by Barbara Tracy
Dear Mike,
My name is Barbara Tracy, and I am Bruce Tracy's sister. I live near Walnut Creek California, and a friend from Fresno called me to tell me about the article about my brother the Mole man. My mom moved nearby 3 years ago after the death of my step-dad. She also heard the news about her son (my brother) from friends in Fresno. Do you know anything about Bruce? Is he still living in Fresno? Is there any way for us to contact him? Thanks, Barbara Tracy
Add a Comment
§Fresno Harassment Legacy
by Dan
Fresno's current mayor Ashley Swearingin has taken a much better approach to the homeless problem than her predecessor Alan Autrey. Mr. Autry ordered city workers to 'clean up' homeless encampments. The ACLU got involved and sued the city, ultimately the city had to pay many people for stealing their property.

END_OF_DOCUMENT_TOKEN_TO_BE_REPLACED
Add a Comment
Support Independent Media
We are 100% volunteer and depend on your participation to sustain our efforts!