by Sam Brown
I arrived in Calexico with a small group of friends Wednesday
November 7th around 3:00 PM. While arriving at the Calexico/Mexicali
border it was a bit difficult to find the camp. There was a growing
sense of unease as it was unclear how the events of the day would turn
out. Our purpose was to protest the border and unify with activists in Mexico and around the world in creating a world free from the restrictions of capitalism and militarized barriers. 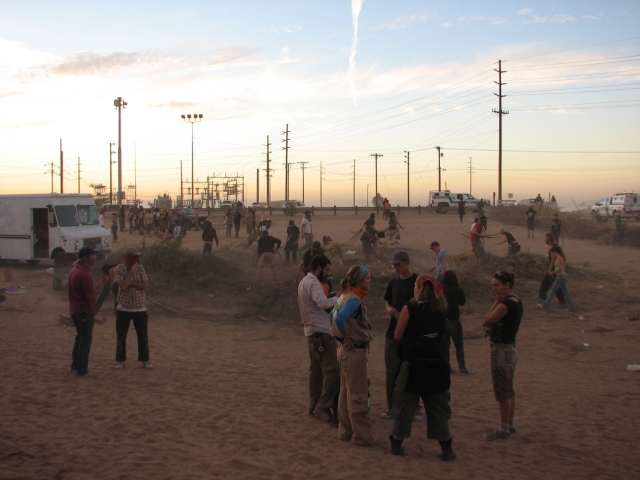 original image (2048x1536)
Day One:
I arrived in Calexico with a small group of friends Wednesday
November 7th around 3:00 PM. While arriving at the Calexico/Mexicali
border it was a bit difficult to find the camp. There was a growing
sense of unease as it was unclear how the events of the day would turn
out. As we began to drive closer and closer to the actual camp it
became clear that the border patrol was aware of the convergence and
had taken measures to prevent the mobilization. The border patrol
vehicles had blocked off main roads leading into the camp. My small
group and I were forced to walk to the camp through an empty field in
the blistering sun. As we carried our supplies we could see border
patrol vehicles driving down the main roads along the way watching us.
Despite the heavy presence of border patrol we made it to the camp
safely and immediately began to join a group of other activists with
bandanas covering their face in occupying the area.

There was a sense of excitement as the border patrol monitored our
actions in a suspicious yet oblivious way. They had cameras pointed
towards us and we began to barricade a perimeter which would keep our
camp intact. We set up our tents, sleeping bags, tarps, and then
started discussing the logistics of a functioning camp. Our purpose
was to protest the border and unify with activists in Mexico and
around the world in creating a world free from the restrictions of
capitalism and militarized barriers. After establishing the camp
people began to climb the border and greet protestors on the other
side while some even began to participate in a volleyball game with a
beach ball. After settling in, there was a large group meeting which
relied heavily on consensus decision making. During this meeting
certain smaller groups were created that would monitor and function
certain tasks in facilitating the success of the No Borders Camp. Some
of these small groups included: security, independent media and radio,
medical staff, a committee to build a toilet, a food serving
collective, an art collective, and a mental health and trauma
committee. The different groups served to fulfill small aspects within
the camp while the larger meetings discussed upcoming proposals and
actions.

After making some preliminary plans I climbed the border and began
talking with our friends in Mexico. They urged me to cross the border
and join them so I decided to secure my things and camp out with them
for the night. As I left the California/United States camp the border
patrol had set up huge lights that would be turned on all night. I
crossed the border and was welcomed by a much smaller group that had
occupied the space on the Mexican side of the border. While the Mexico
border camp did not have as many supplies they had set up a camp and
established a large communal gathering area where assemblies would
take place and also discuss on a consensus-based method plans for the
upcoming week. After staying up really late into the night talking
about our goals for the camp I was really glad I had decided to spend
the night in Mexico since it helped bridge differences between
activists there and here and it was the first step in creating a truly
unified camp.

I woke up in the Mexicali camp and immediately many of the
participants in the camp started securing banners and making sure the
camp was a solid autonomous space. Once again, almost everyone had
bandanas covering their face since the presence of the border patrol
and their video cameras was a concern among participants. After
clearing out the area there was an extensive meeting in the morning
that included logistics and proposals for the upcoming week. Similar
to the camp on the other side of the barrier toilets had been
constructed, there was a kitchen, and a large common area. While the
people on the US side of the No Borders Camp numbered somewhere
between 100 and 200 participants there was a group of about 50 people
in Mexico and the meetings flowed smoothly.

I spent the day documenting the event with photos and video while
assisting in the art-making process, construction of shelters and
tents, and building a walk-way from the street of Mexicali into the
camp. The people in Mexico were humble and warm. While some serious
concerns were raised about the possible behavior of the police and
border patrol, it was decided that certain actions would take place
that would build solidarity with people on the other side of the
barrier.

A significant portion of the day was spent towards making sure the
food situation would suffice for the remainder of the camp and
establishing good communication with the other camp. I spent the rest
of this fulfilling day hanging out and participating in group
meetings. A lot of art was created that would decorate the border with
murals of hope and peace. The art was meant to send a powerful message
to the people of Mexico and the world that this event is an attempt to
construct a society that opposes the corrupt, racially divided, and
pro-corporate agendas of not just the Mexican and American
governments, but all governments in general. 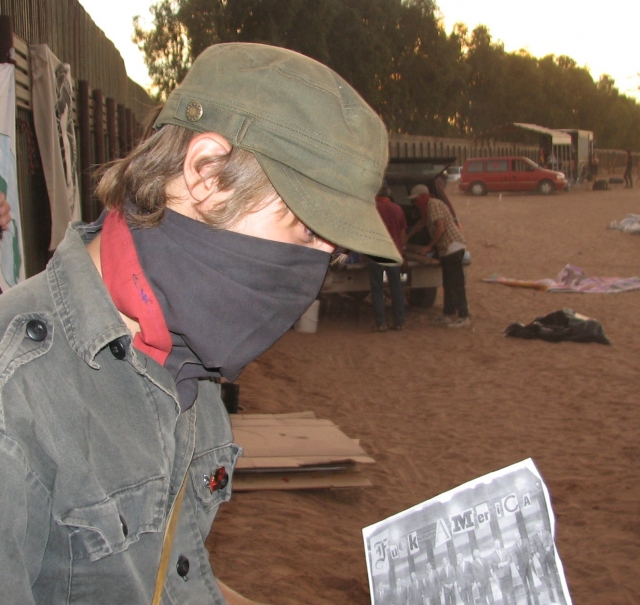 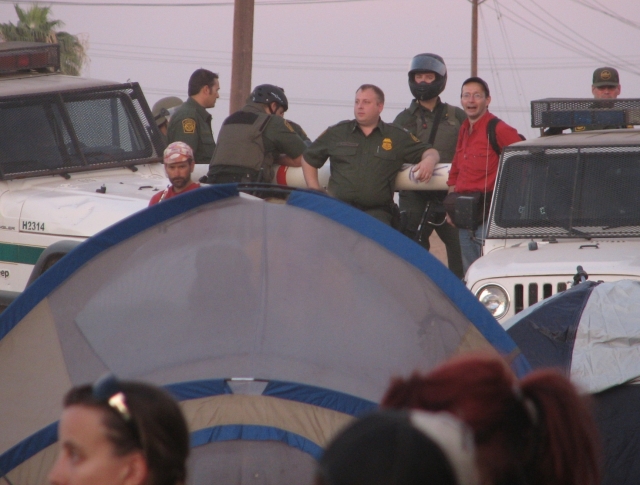 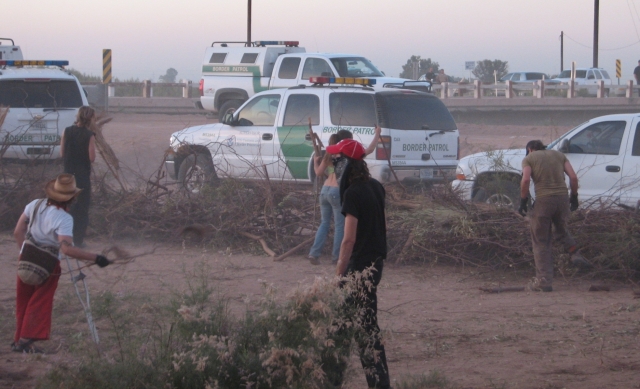 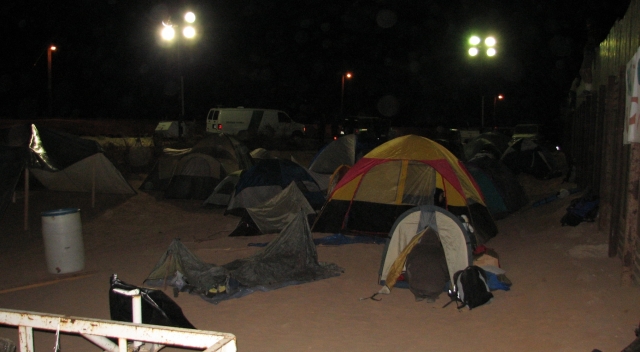 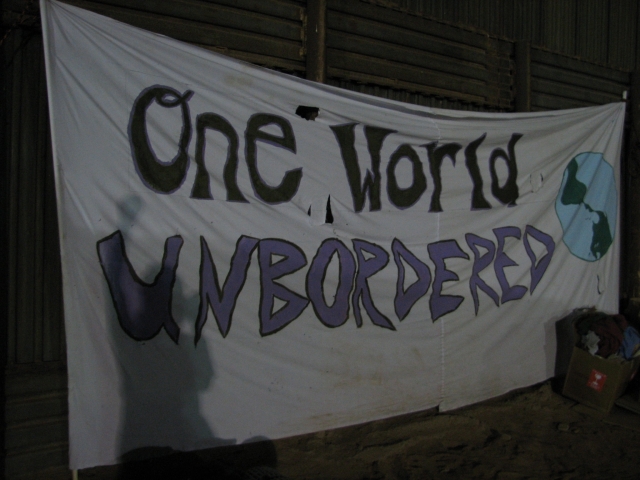 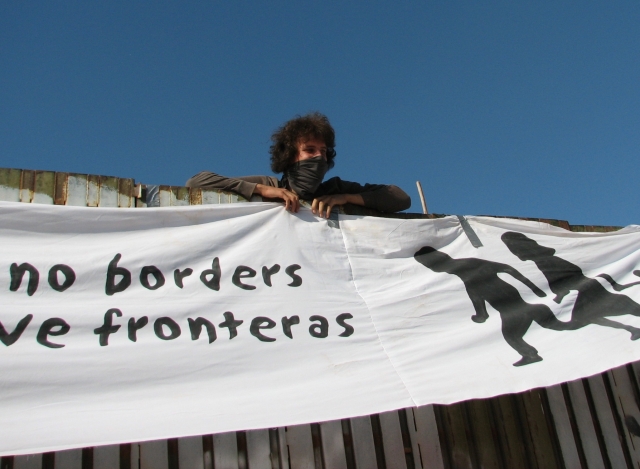 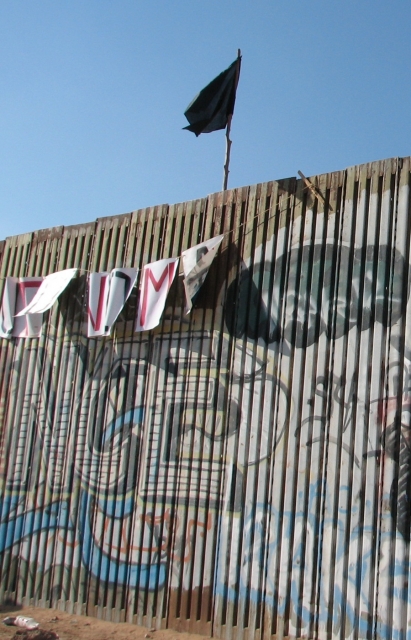 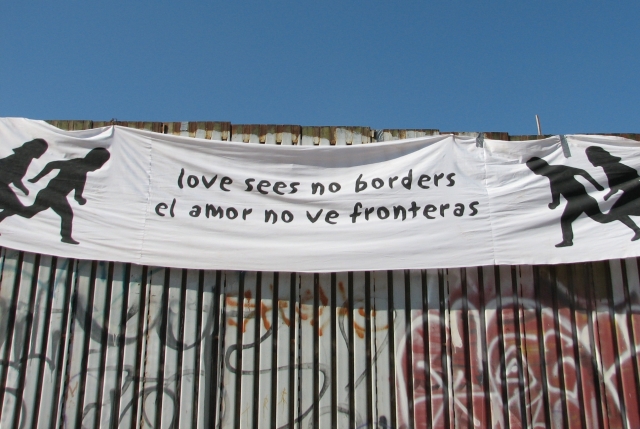 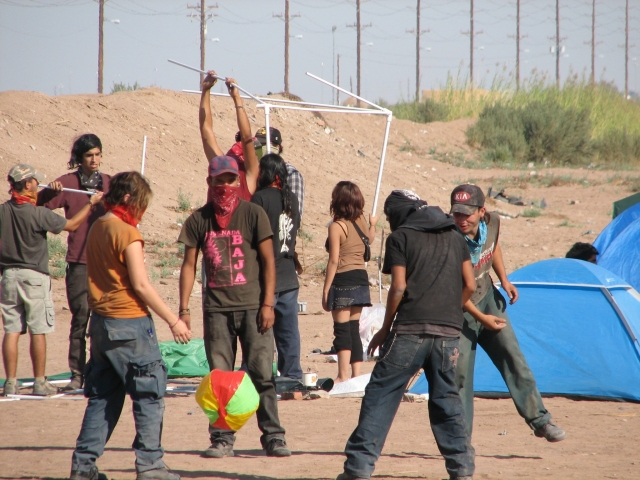 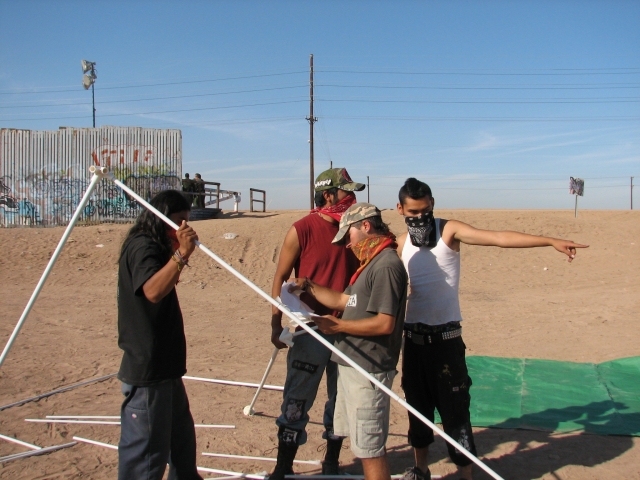 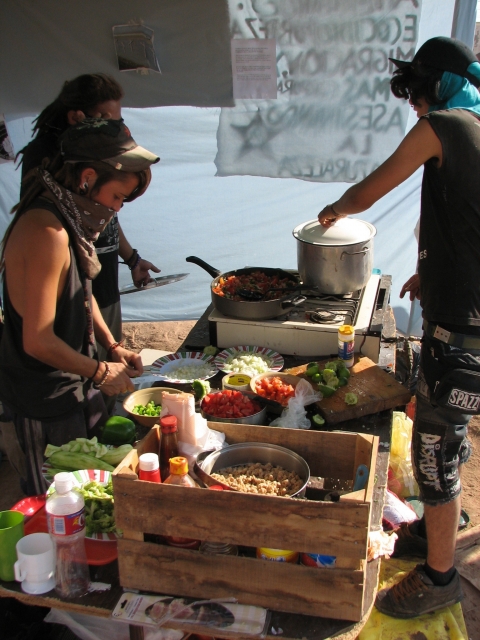 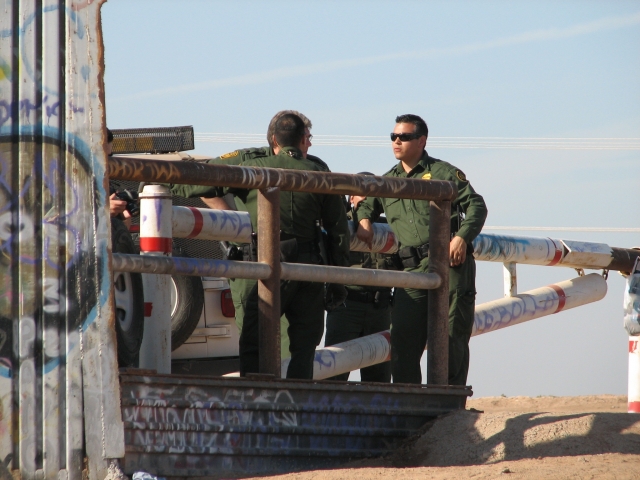 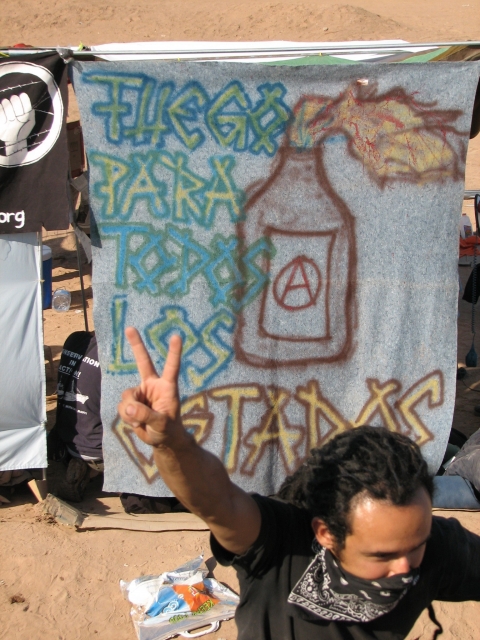 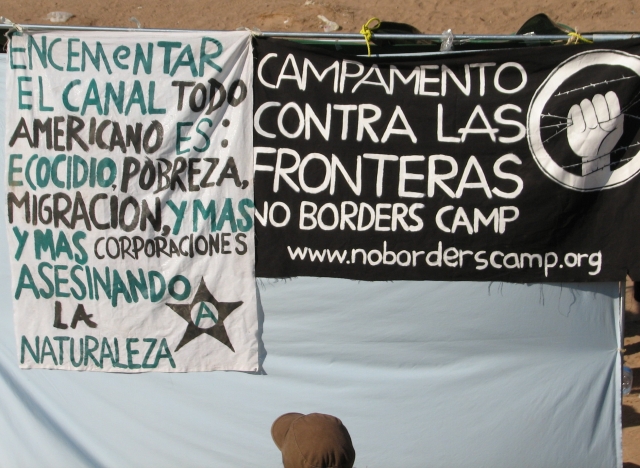 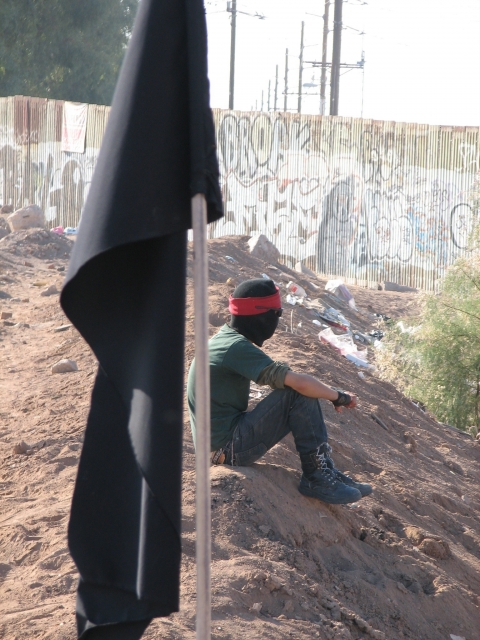 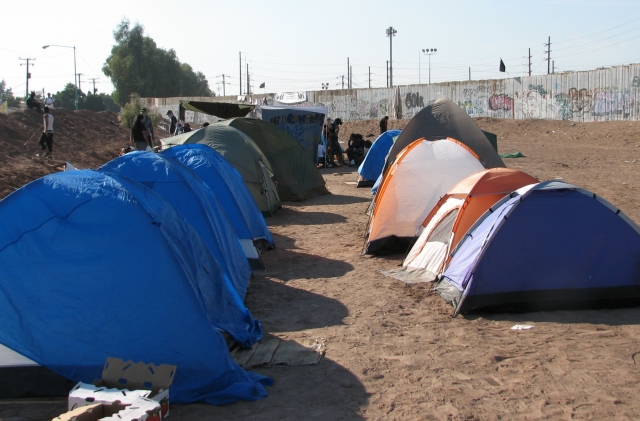 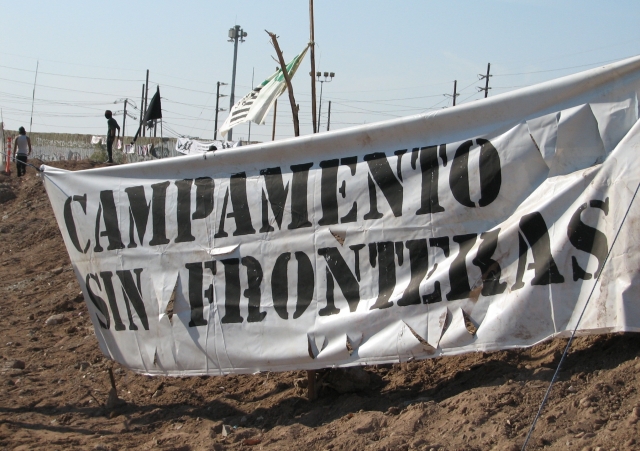 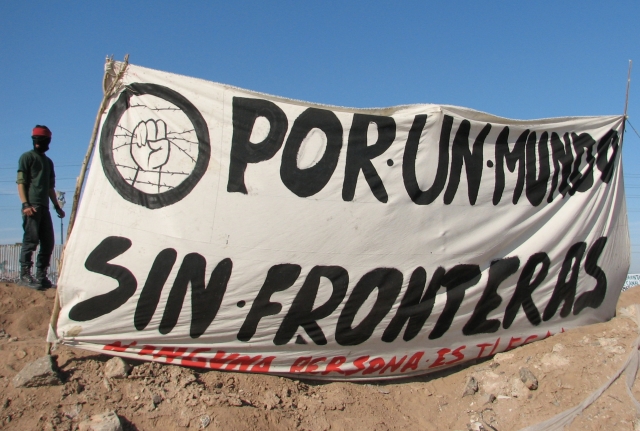 original image (1915x1292)
For a world without borders
Add Your Comments
Support Independent Media
We are 100% volunteer and depend on your participation to sustain our efforts!