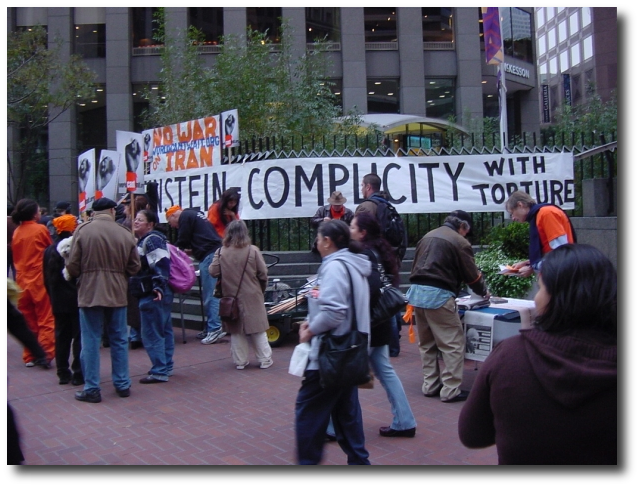 Mukasey as Attorney General? NO WAY!
Do we condone torture? Are we complicit with the Bush regime?
COME OUT to protest: Wednesday, Nov. 7 at Dianne Feinstein’s SF office!
To the Bay Area World Can’t Wait Community:

The nomination of Michael Mukasey as the Bush regime’s next Attorney General is an outrage, pure and simple. If he can’t say waterboarding is torture — what does it mean that he is in line for the highest level of leadership in the Justice Department???

For Schumer and Feinstein to approve Mukasey’s nomination means their acceptance of torture as legitimate national policy and practice. A decisive YES TO TORTURE vote from the leadership of the Democratic Party . . . Yes, the same Democratic leadership that has gone belly-up for every other crime and escalation of crime pushed forward by the Bush regime. The Patriot Act, the rendition and torturing of "terror" suspects, all of it.

What does this mean for us, the ordinary people living in this country, when the U.S. government takes such a direction?

If you had lived in Germany in 1933, the questions were similiar.

"People look at all this [what the Bush regime is doing] and think of Hitler - and they are right to do so. The Bush regime is setting out to radically remake society very quickly, in a fascist way, and for generations to come. We must act now; the future is in the balance.”
- from the World Can’t Wait Call

DESCRIPTION OF PROTEST AT SAN FRANCISCO'S FEDERAL COURTHOUSE ON BEHALF OF THE JENA 6 (POSTED EARLIER AT THE INDYBAY CALENDAR, http://tinyurl.com/25qqm8):

Last week, the racist judge that originally presided over Mychal Bell's conviction sent him back to jail for 18 months for "violating probabation" from an earlier conviction. The precise violation was his arrest in the Jena 6 incident. While the racist thugs who started this cycle of events continue to walk free, the Jena 6 are still facing long prison sentences.

On Wednesday, Nov. 7, the growing movement to free the Jena 6 will face an important challenge. On that day, four of the Six -- Theodore Shaw, Robert Bailey, Bryan Purvis, and Mychal Bell -- are expected in court for pre-trial hearings. The ANSWER Coalition is calling on all progressive and anti-racist forces to come together for rallies in front of local courthouses across the country with the demand to free the Jena 6, and drop all the charges. Demonstrations are already confirmed in Los Angeles, San Francisco, Washington DC, New York City, Chicago, Seattle, and New Haven (CT).

The case of the Jena 6 has garnered international attention, and shone a spotlight on the racist nature of this country's criminal "injustice" system. Without activists taking action across the country, however, it is certain that their case -- like so many others -- would never have received the attention that it has. Mychal Bell's original conviction never would have been overturned; instead he would have become just another statistic.

On Sept. 20, tens of thousands of people demonstrated in Jena, Louisiana and in other cities around the country to demand the complete freedom of the Jena 6, and the release of Mychal Bell. A week later, after 10 months in prison, he was granted bail and released. But shortly afterwards, the Louisiana judge that originally convicted Bell struck back, ordering him back into custody.

The spirit and determination of Sept. 20 protest in Jena has to be replicated over and over across the country on November 7th. The movement is locked in a tug-of-war with the racist Louisiana justice system. Now we have to dig in our heels and until all charges against the Six are dropped, we have to keep on pulling! All out for November 7th to Free the Jena 6!

BELOW, SOME OF MY PHOTOS:


§A young man protests a government that tortures.
by Photos by Robert B. Livingston Wednesday Nov 7th, 2007 11:41 PM 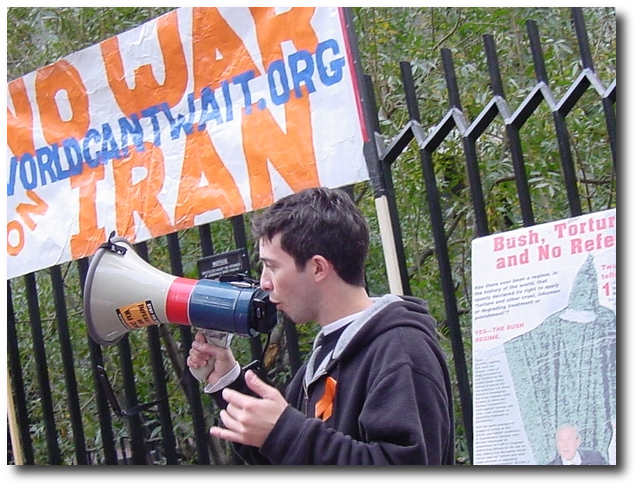 (His government.)
§A man speaks out against Feinstein's confirmation of Mukasey
by Photos by Robert B. Livingston Wednesday Nov 7th, 2007 11:41 PM 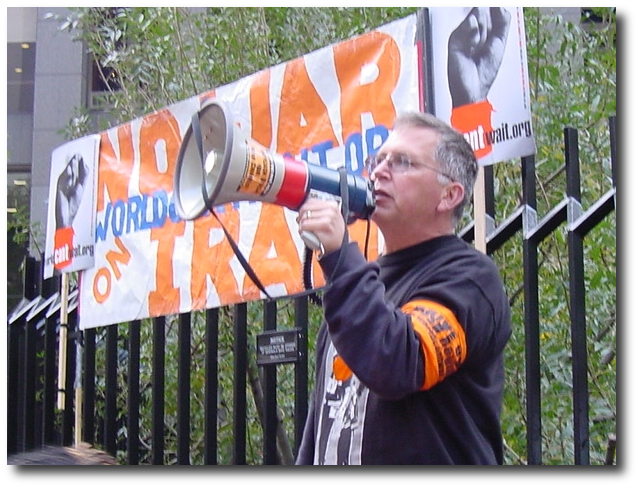 An article by Amy Goodman: http://tinyurl.com/3cnu6f
§Activists portray themselves as tortured prisoners to passing commuters.
by Photos by Robert B. Livingston Wednesday Nov 7th, 2007 11:41 PM 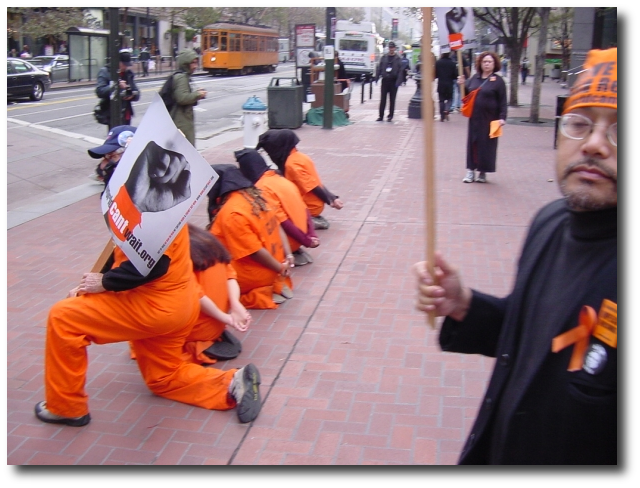 §A pet dog surveys the activity of protesters and passing commuters.
by Photos by Robert B. Livingston Wednesday Nov 7th, 2007 11:41 PM 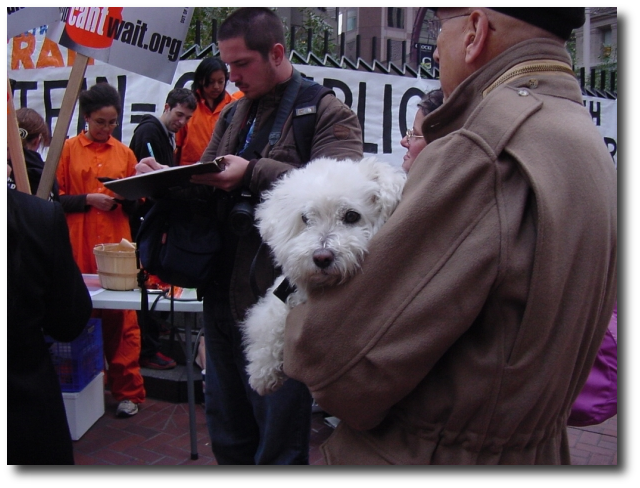 §Protesters faced police at the entrance to Feinstein's building.
by Photos by Robert B. Livingston Wednesday Nov 7th, 2007 11:41 PM 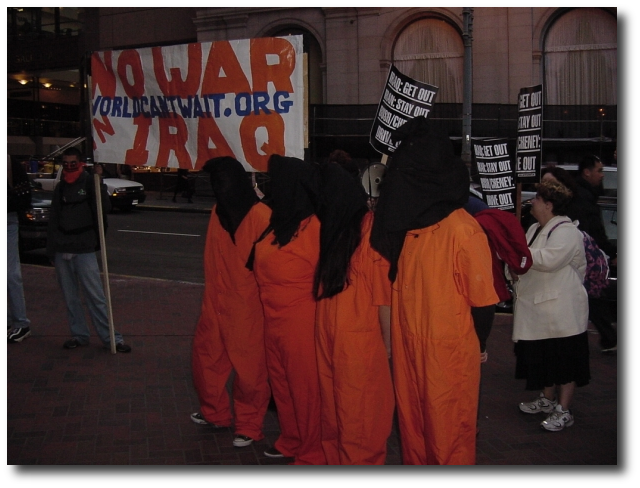 §Police blocked the entrance of Feinstein's Building at 1 Post Street
by Photos by Robert B. Livingston Wednesday Nov 7th, 2007 11:41 PM 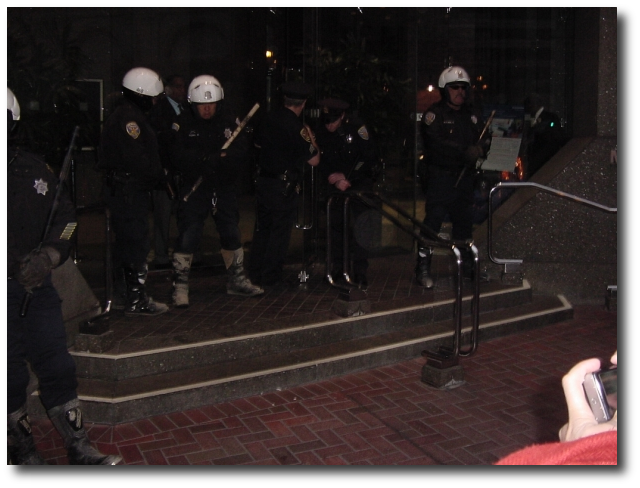 Although taunted by some protesters for protecting someone who has now thumbed her nose at international law, the police in riot gear showed restraint as they barred the entrance to Dianne Feinstein's building.
§Protesters marching to the Jena 6 Protest
by Photos by Robert B. Livingston Wednesday Nov 7th, 2007 11:41 PM 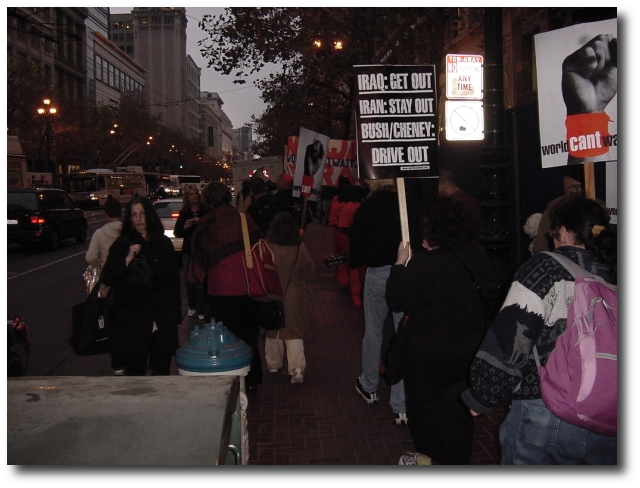 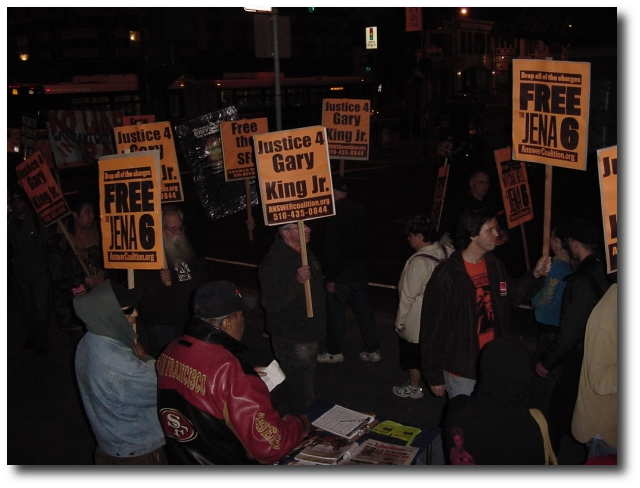 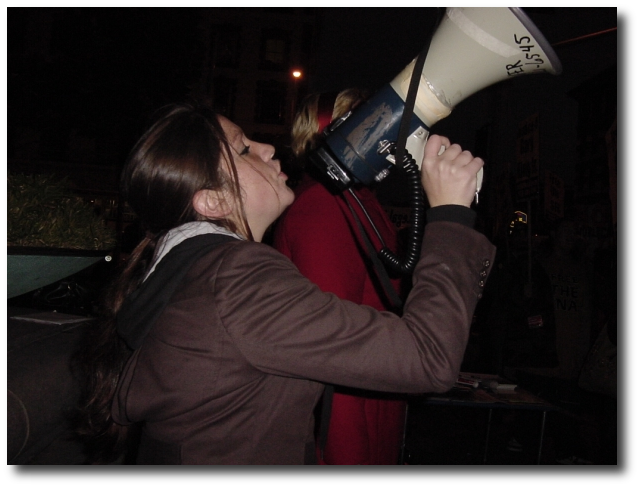 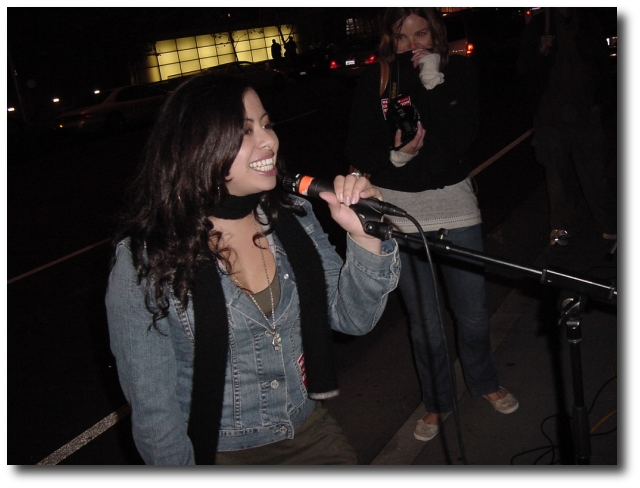 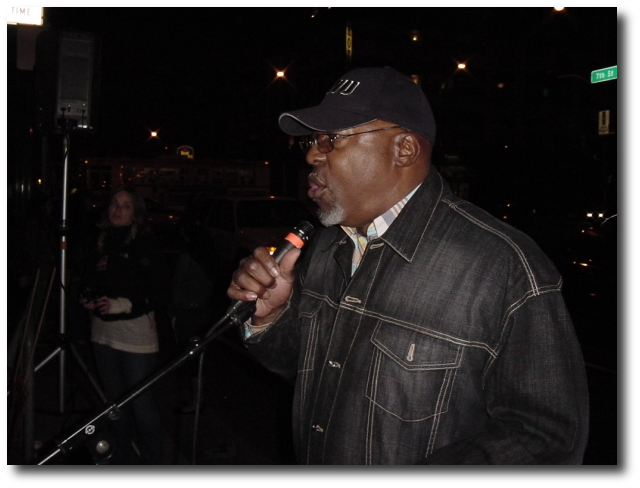 §15 second video
by Photos by Robert B. Livingston Wednesday Nov 7th, 2007 11:41 PM
Copy the code below to embed this movie into a web page:
Download Video (343.3KB) | Embed Video
Dark video doesn't show much, but sound gives a flavor of the protest.
Add Your Comments

You'd think the other tenants in that building with Feinstein would get sick of having the doors blockaded all the time.
Add a Comment
Support Independent Media
We are 100% volunteer and depend on your participation to sustain our efforts!