Add an Event
Newswire
Calendar
Features
Home
Donate
From the Open-Publishing Calendar
From the Open-Publishing Newswire
Indybay Feature
Publish to Newswire
Add an Event
Related Categories: California | San Diego | Environment & Forest Defense | Health, Housing & Public Services
1,000,000 flee homes in California due to wildfires; over 500,000 ordered to evacuate
by Wikinews
Wednesday Oct 24th, 2007 3:25 PM
"If it's this big and blowing with as much wind as it's got, it'll go all the way to the ocean before it stops ... We can save some stuff but we can't stop it," said captain of the San Diego fire department, Kirk Humphries. 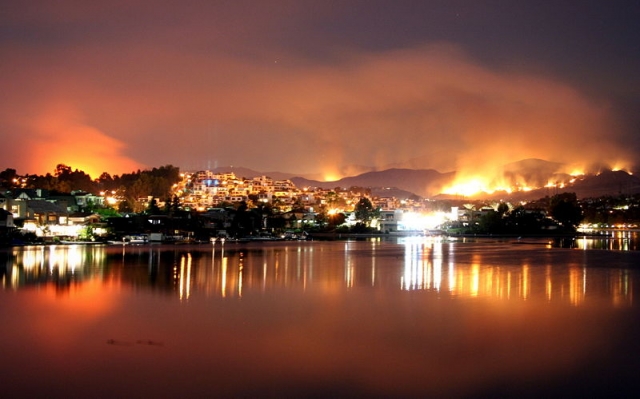 Reports say that the amount of people fleeing from their homes in California located in the United States due to wildfires has reached the 1,000,000 mark as the fires continue to grow. More than 500,000 people have been ordered to evacuate areas of Southern California as firefighters have began to realize that they may not be able to put all the fires out.

45 people have been injured, 21 of those being firefighters battling the blazes. At least one person was reported to have been killed earlier, but so far those reports cannot be confirmed.

"If it's this big and blowing with as much wind as it's got, it'll go all the way to the ocean before it stops ... We can save some stuff but we can't stop it," said captain of the San Diego fire department, Kirk Humphries.

The Santa Ana Winds have been blowing for three days and they are not forecast to stop for the next day or so. 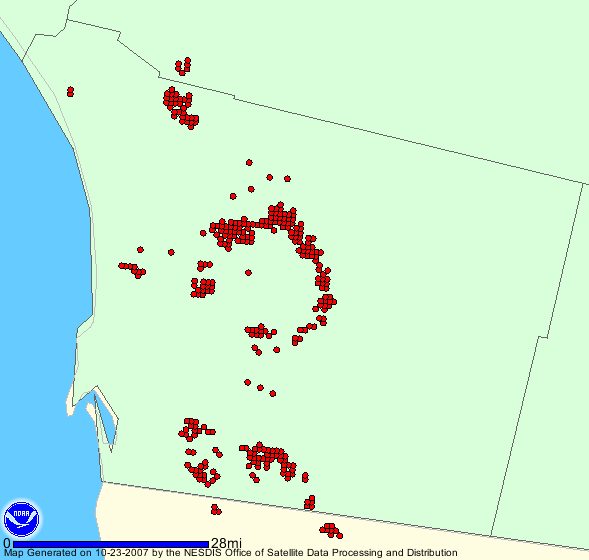 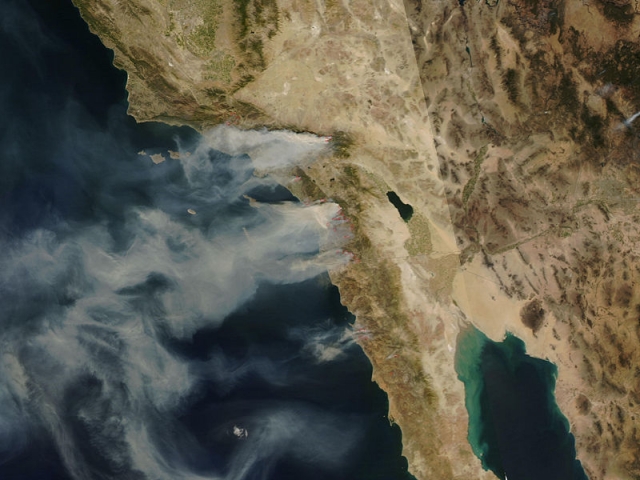 The California wildfires of October 2007 are an ongoing series of wildfires burning across Southern California, forcing the evacuation of approximately 900,000 residents[2], making it the largest peacetime movement of Americans since the Civil War era.[3] At least 1,500 homes were destroyed[4] and around 500,000 acres (2,000 km²)[1] of land have burned from Santa Barbara County to the Mexican border.[5] Currently, 16 active fires are burning in the region.[6] Six people have died[1] and at least 70 others have been injured.[2]

Californian Governor Arnold Schwarzenegger has declared a state of emergency in seven California counties where fires are burning.[7] President George W. Bush has declared that an emergency exists in the State of California and has ordered Federal aid to supplement state and local response efforts.[8]

The major depositive factor in the extreme fire conditions is the drought in Southern California; the fires themselves have been exacerbated by unusually strong Santa Ana winds.[9] The winds are believed to have knocked down power lines, triggering several of the fires. One fire was the result of arson;[10] one was started by an overturned semi-truck.[11] The causes of the remaining fires are under investigation. Wind conditions are not expected to improve until October 25, 2007.
http://en.wikipedia.org/wiki/California_wi...
Add Your Comments
Support Independent Media
We are 100% volunteer and depend on your participation to sustain our efforts!