Add an Event
Newswire
Calendar
Features
Home
Donate
From the Open-Publishing Calendar
From the Open-Publishing Newswire
Indybay Feature
Publish to Newswire
Add an Event
Related Categories: California | San Diego | Santa Cruz Indymedia | Police State & Prisons | Racial Justice
Interview With Romaine "Chip" Fitzgerald: 38 Years Locked Down
by Riva Love (brownberets [at] msn.com)
Monday Oct 22nd, 2007 9:44 PM
Romaine "Chip" Fitzgerlad is the longest held Black Panther prisoner. Locked down for 38 years, Chip was due his parole a long long time ago. Still strong and still revolutionary, Chip discusses his history, his case, and most importantly...his commitment and wisdom on the current struggle for social justice and freedom. Currently housed at Imperial Valley State Prison, Chip's supporters include the Monterey Bay NAACP, the Anarchist Black Cross, the Watsonville Brown Berets, the Prisoners of Conscience Committee (POCC), Elaine Brown and numerous other individuals.
Listen now:
Copy the code below to embed this audio into a web page:
Download Audio (11.2MB) | Embed Audio
Chip Fitzgerald gives his first recorded interview in his 38 years of incarceration to mark the anniversary of the founding of the Black Panther Party for Self Defense and the National Day of Protest Against Police Brutality. Chip has had two scheduled parole hearings in the past 6 months. Neither one ever happened. Chip awaits his next parole hearing date (still unknown) in anticipation of his long overdue freedom. Listen to Chip on his early days in the streets, how he came to join the party, and his words for young people oppressed by the current power structure. ALL POWER TO THE PEOPLE!
§Statement by Romaine “Chip” Fitzgerald
by freechip.info Tuesday Oct 23rd, 2007 3:08 PM
Statement by Romaine “Chip” Fitzgerald. Longest held Black Panther Political Prisoner in captivity. Chip is in his 38th year of incarceration.

ALL POWER TO THE PEOPLE!
THE PEOPLE ARE THE POWER!

On behalf of the 170,000 imprisoned sisters, brothers, and comrades for whom I do not speak for but I do speak with the, we embrace you in spirit of love and solidarity!

In the current atmosphere of neo-conservative Christian fascism and extraordinary rendition- where people are afraid to be labeled unpatriotic…or a terrorist for their progressive and radical beliefs and political dissent- to paraphrase my comrade Fred Hampton of the Black Panther Party and who was assassinated nearly 40 years ago…I REMAIN A REVOLUTIONARY!

The prison system has mutated into a complex dysfunctional resource-wasting parasite of social control, political repression and revenge! Human beings are warehoused in these concrete and steel bunkers that destroy human sensibilities and the human spirit. Then following years of continuous antagonism and frustration at the hands of sadistic prison guards tortured souls are released on to an unsuspecting public to offend. There in is the cause and effect of an 80% recidivism rate.

The human warehouses destroy human beings like the Iraq war is mutilating young Americans. Prisoners are being de-sensitized…they are frustrated, angry and bitter and unprepared to become productive members of society. These tortured souls who are our families and loved ones, are paroled with little hope…this is why California’s recidivism rate is above 75%. The system is now designed to perpetuate itself.

We are again confronted with a parole setting body of individuals known as commissioners. Who are that racist and revenge oriented and operate as if they are exempt from the rule of law with the CCPOA (Prison Guards Union) and crime victims driving the policy of the CDC. The intent is to keep these prisons filled to capacity!

From a practical perspective of economic dollars and cents, there is no return on the dollars invested in the Prison Industrial Complex. It’s an enormous drain on the state budget, denying social services the people-health care insurance and increasing funding for education and social programs for our youth and young adults to prevent them from joining gangs and engaging in criminal activity.

The enormity of the problem may seem overwhelming…and we as individuals by comparison may seem insignificant and powerless but appearances can be very deceptive. In the words of Public Enemy…”Don’t Believe the Hype.”

What is to be done to solve the problem? Let us follow the example of the anti war movement. Let the politically conscious people of Cali, the progressive and revolutionary people rise up and seize the day! Organize to halt the perversion of justice and squandering of valuable resources by the Prison Guard Union (CCPOA) and the Prison Industrial Complex. Demand to be active participants in the sentencing/ prison reform process. Demand public transparency as guaranteed by the law. Register and vote out the legislators who have rewarded the campaign contributions of the California Correctional Peace Officers Association with CARTE BLANCHE to do as they please in the California Department of Corrections- which has resulted in corruption, criminal mismanagement, thievery, brutality and even death!

The federal District courts have held the prison bureaucrats guilty and responsible for all of the above. So the people have an obligation to rise up and say to the public servants…ENOUGH IS ENOUGH! BASTA! ALL POWER BELONGS TO THE PEOPLE…WE ARE THE POWER! 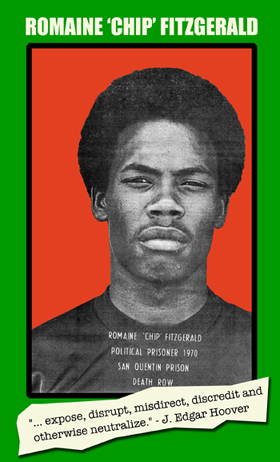 ** Note, the photo of Chip is from 1970! Does anyone have a photo of Chip that is more recent? If so, please add it here.
Add Your Comments
Support Independent Media
We are 100% volunteer and depend on your participation to sustain our efforts!